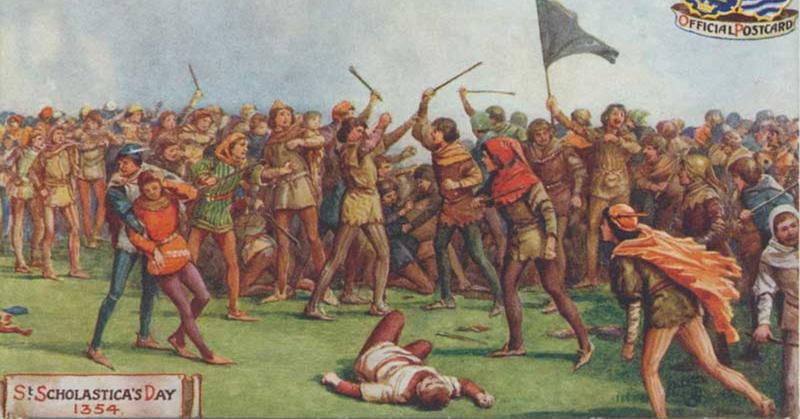 St. Scholastica Day riot. (Howard Davies/Wikimedia Commons)
Don't you hate it when you get all gussied up and head out to a restaurant for a nice evening only to receive poor-quality food and bad service? Maybe you would send the food back, complain to the manager, or even leave a lousy tip. But have you ever thought about taking your glass and smashing it into the server's face? Hopefully not, but if you were an overly entitled Oxford student during the 14th century, you might do just that.
On February 10, 1335, a few Oxford students went to the popular Swindlestock Tavern, where they ordered a round of drinks. However, they were none too impressed with the wine they were served and hurled insults at the owner, John de Croydon, who took offense and insulted the students right back. In a tale as old as alcohol, things escalated quickly, and only moments later, the students began throwing their wine glasses at the owner. Soon, everyone in the bar joined in, and just like that, the drunk and angry mob were scuffling in the streets. This seemingly minor incident would rapidly devolve into a massive outbreak of violence that would leave hundreds injured and more than 90 people dead in an episode known now as the infamous St. Scholastica Day Riot. 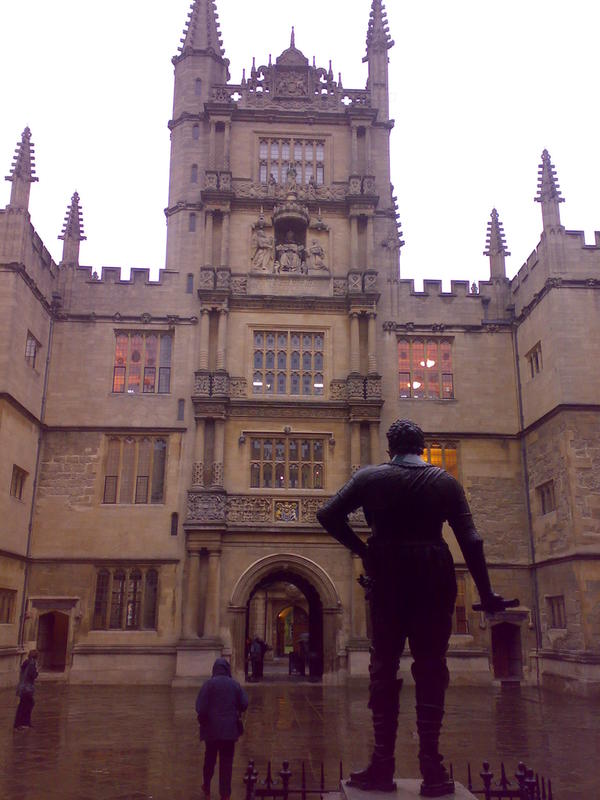 The Tower of the Five Orders, Bodleian Library, University of Oxford. (Ozeye/Wikimedia Commons)

St. Scholastica, for the record, was an Italian nun who was best known as the sister of the more famous St. Benedict of Nursia, the patron saint of Europe. It's unclear if the holiday itself was the reason for the student's revelry; it's more likely that they just felt like getting drunk.
As violence erupted in the tavern, two distinct groups formed: the townies and the students. Almost every college town local can understand what it's like to deal with the never-ending onslaught of unruly teenagers getting their first taste of unsupervised freedom, but the case of 14th-century Oxford was a little bit different. First of all, the University of Oxford at the time was associated with the immensely powerful Catholic Church, and as England was a Catholic nation, the students had legal privileges that the townsfolk did not. Basically, they couldn't be sued, were rarely arrested, and didn't have to pay most taxes despite their considerable wealth. You can understand the resentment.
Stuff really hit the fan when several students were suspected of murdering a local townswoman. As there was little legal recourse, the townsfolk simply decided to lynch the alleged murderers themselves, prompting several Oxford students to flee in fear and form what is now the University of Cambridge. Some of the townsfolk also had a more general hatred toward the clergy and the high taxes associated with the state's involvement. All of this built-up resentment between the students and the locals resulted in an ordinary pub fight becoming an all-out battle royale. 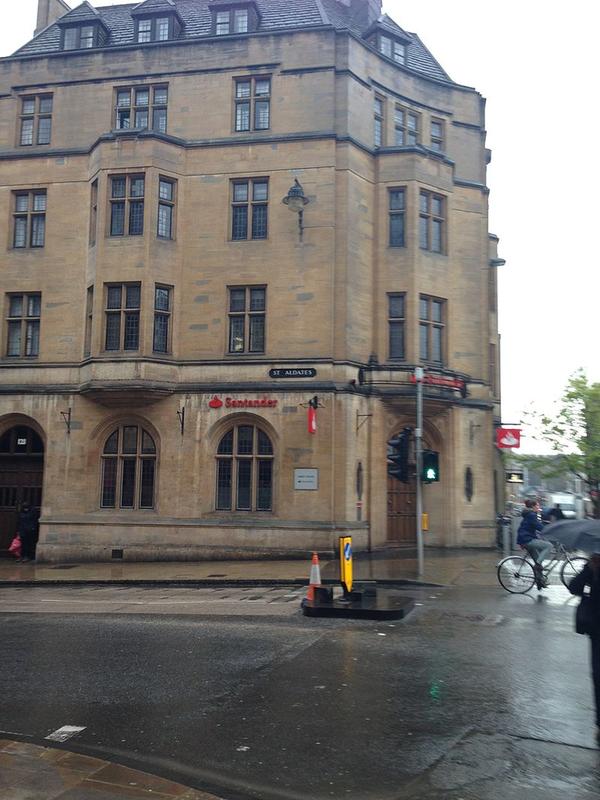 Twitter didn't exist back then, so both sides took to their respective bell towers to gather folks to the cause. Initially, the Chancellor of Oxford attempted to quell #StScholasticaDayRiot and apologize for his students' behavior, but he was swiftly attacked by protesters and retreated into the college.
Over the next two days, the townsfolk and students fought with clubs, knives, and bow and arrows. According to the Annals of Oxford, "the whole male population of Oxford," as well as a few country folk, joined in on the so-called "excitement." By the second morning, the mob had grown to over 2,000 people. The townies sang and chanted "Slea, Slea, Havock, Havock ... Smyte fast, give gode knocks" as they descended upon the students, who had attempted to hide and barricade themselves within the safety of their campus and surrounding inns by the morning of February 11.
It didn't do them much good, as the townsfolk had little issue breaking into their residences and slaughtering them, along with several faculty members. They even scalped a few. The scholars took a bite out of the townies, too, and managed to kill an estimated 30 rioters during the clash. However, many Oxford students decided to simply flee after losing 63 of their classmates to the violence. 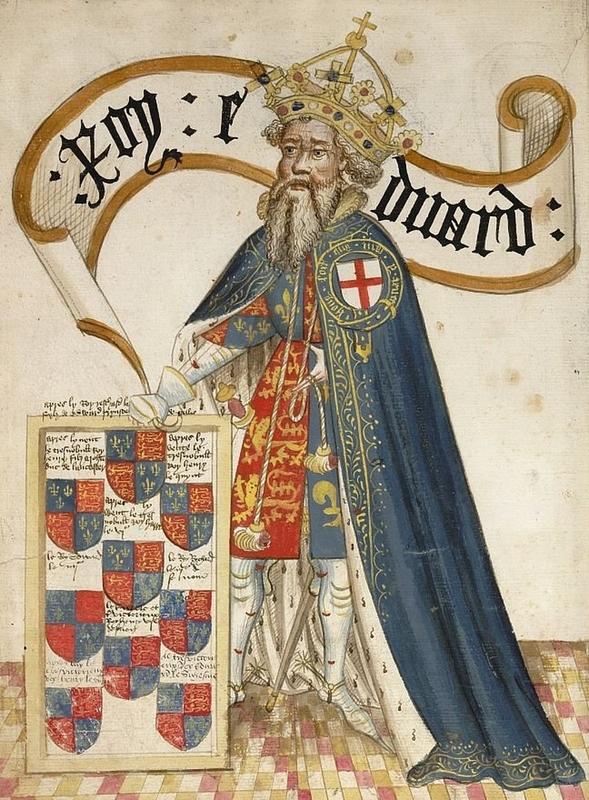 In the end, at least 93 people were dead and half the town was burnt to ashes. Edward III, King of England and Ireland, quickly learned of the massive riot happening only a few towns over, but rather than investigate, he blindly sided with the almighty Church and demanded the arrest of all townspeople who participated in the riot. In fact, the legal rights of the scholars skyrocketed in the aftermath of the riots, as they took over most criminal court duties as well as the ability to levy local taxes. Talk about privilege. The town itself was punished with fees and an annual penance of 63 pennies (a lot back then) for every student who was murdered. In a further act of humiliation, the mayor, along with 62 townspeople, was ordered to march to the local Catholic house of worship to pay the fine and beg forgiveness.
Believe it or not, this overly symbolic punishment went on for a staggering 470 years. Finally, in 1825, the city's mayor announced that he had better things to do, and as the significantly less powerful 19th-century Catholic Church was in no position to force him, the odd tradition finally died an unceremonious death.
Despite its somewhat sordid history, the University of Oxford is the second-oldest university in the world still in existence and regarded today as one of the best and most prestigious universities in Great Britain.