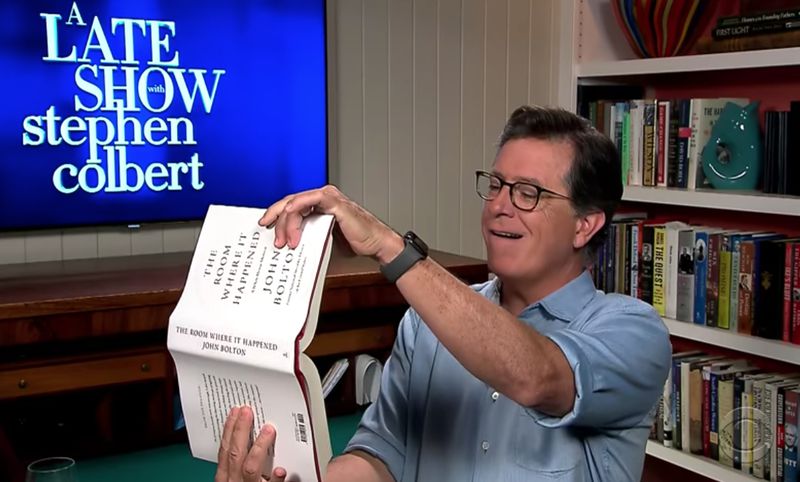 Stephen Colbert holds up a copy of John Bolton's new book on his show.


Not only does Stephen Colbert have a copy of the John Bolton tell-all the White House is trying to shut down — he also has Bolton booked.
The CBS late night host held up a copy of “The Room Where It Happened” on his Tuesday show and told viewers the book’s author, who served as the Trump administration’s national security adviser for 17 months, will be on “A Late Show” next week.
Broadcasting from his home, Colbert interrupted his monologue to announce his breaking news.
“During the taping of this monologue, the Department of Justice filed a breach of contract suit against ex national security advisor John Bolton,” Colbert said.
He mocked the idea that a public servant could breach a contract and said, “This lawsuit is a huge pile of crap.”
While Colbert didn’t talk about the content of the “explosive book” due to an embargo agreement with its publisher, he said he’d do that next Tuesday when Bolton is on his show.
To illustrate his point that the White House does not want Bolton’s book hitting bookshelves as-is, Colbert played a video clip of Attorney General Bill Barr telling reporters the tome shouldn’t be released because it could contain classified information. In that video, Barr claimed that according to “sources,” the book was in the process of being printed, but hadn’t been published.

That’s when the 56-year-old funnyman held up his copy of “The Room Where it Happened.”

Colbert admitted that he doesn’t know what’s in the book yet, but unless special forces break into his home and take his copy, he’ll look through it soon.

“Full disclosure I haven’t read it yet because it looks really long and it has no sympathetic characters,” he joked.

Colbert also suggested that if Trump wanted to stop Bolton from disclosing embarrassing information about Trump, he should write him a check for $130,000.