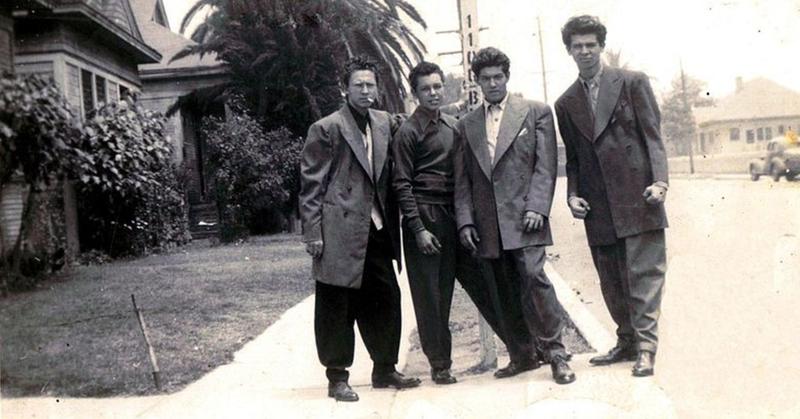 You’ve heard its name memorialized in song, but do you know the very real and very frightening story behind the Zoot Suit Riots that occurred in 1943? At the time, young Latino men who wore pork pie hats, dangling watch chains, and large zoot suits were considered a menace to society. Their crime? Using "too much cloth."
The riots were the product of some of the most heinous racial violence in the history of Los Angles, spurred on by American servicemen attacking young Latino men for using excess fabric in their suits, something that the young men saw as a source of pride but the servicemen viewed as a snub in the era of wartime rationing. For the week of June 3, 1943, the city of Los Angeles was a war zone.

Zoot Suits As A Status Symbol

A zoot suit isn't just a big, flashy suit. It is, but it's so much more than that. In the 1930s, young men who spent their evenings dancing in uptown Manhattan started wearing baggy suits that were perfectly tailored to keep them from tripping over their clothes while accentuating their movements. The shoulders were padded, the jackets that covered them were long, and they were punctuated with long watch chains and wide-brimmed hats. The suits were a sign of excess and economic prosperity in a time when no one had any money. Wearing a perfectly fitted zoot suit was like wrapping yourself in a million bucks even if you didn't have two nickels to rub together.
Popularized by performer Cab Calloway, the popularity of the look quickly spread to the West Coast, where it was adopted by African-American and Latino youths who saw the zoot suit as a way to stand out in an era when no one wanted them around. 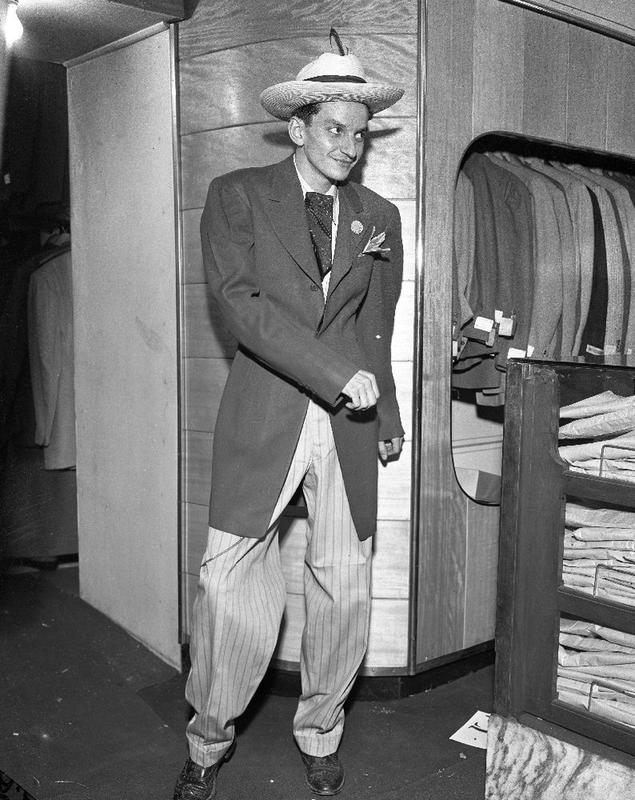 Zoot suits came into fashion at the onset of World War II, when the use of essential fabrics like silk and wool was restricted in the U.S. It wasn't difficult, however, to find a tailor willing to use the excess of fabric required to make a zoot suit. Servicemen saw these outfits as a waste of resources and a gesture of apathy toward their fight overseas, but that was hardly the only motivation for the attacks that became known as the Zoot Suit Riots. Zoot suits were most popular with young men from minority communities, which meant that many of the criticisms of the ostentatious suits had fairly racist undertones. Much like today, many members of the white population of the late '30s and early '40s didn't like seeing minorities succeed or show off their wealth, so these suits were a magnet for racist anger. It was only a matter of time before the powder keg of the anti–zoot suit movement exploded. 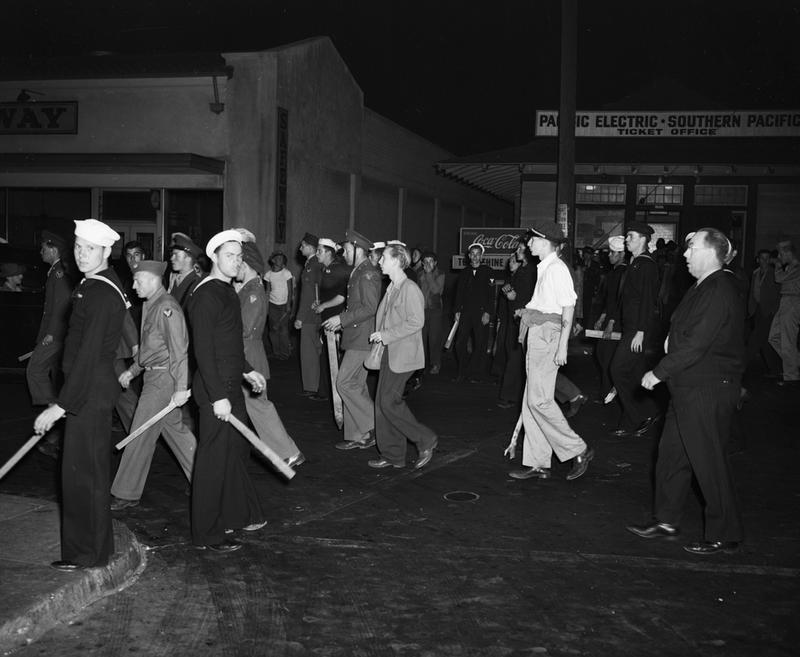 
You're In A Zoot Suit Riot

With the stationing of sailors, soldiers, and Marines in Los Angeles, tensions were running hot in the summer of 1943. Soldiers not only felt that zoot suit–wearing Latinos were being unpatriotic with their clothing, they assumed many were draft dodgers as well. Truth be told, many of their dapper targets were too young to serve at the time.
The initial clash between the soldiers and young Latinos occurred on May 31, when a group of servicemen passed some young men wearing zoot suits south of Chinatown. The groups tussled, and sailor Joe Dacy Coleman left the fray with a broken jaw. Coleman's jaw set things off in a big way: On June 3, 50 armed servicemen traveled from what is now the L.A.F.D. Frank Hotchkin Memorial Training Center to downtown Los Angeles to seek out young Latino men and get their revenge. Anyone caught wearing a zoot suit or simply not being a white serviceman was pulled into the street, stripped, and beaten. 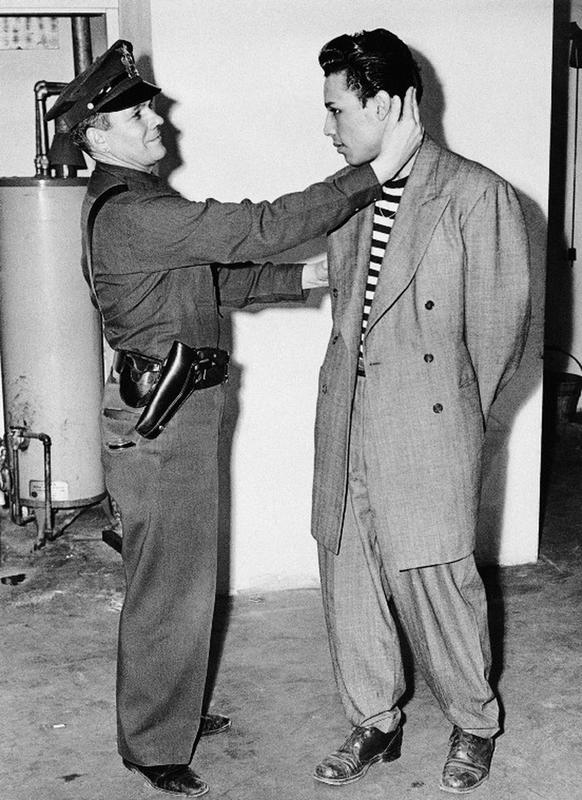 Los Angeles police did less than nothing to help these young people who were being assaulted for the crime of being Latino/wearing baggy clothing/looking at a soldier the wrong way. Specifically, the officers watched the beatings and arrested the victims. As the riot spread, off-duty police officers joined the military men in pulling their targets into the streets to remove their clothing and forcefully cut their hair.
As the days went on, the violence in the riots only increased. White soldiers from middle-class and segregated backgrounds wanted to get in on the assault, so they banded together to roam Los Angeles and outer areas like Watts and work out their racist aggression. Carey McWilliams, an eyewitness, remembered:

Pushing its way into the important motion picture theaters, the mob ordered the management to turn on the house lights and then ran up and down the aisles dragging Mexicans out of their seats. Streetcars were halted while Mexicans, and some Filipinos and Negroes, were jerked from their seats, pushed into the streets, and beaten with a sadistic frenzy. 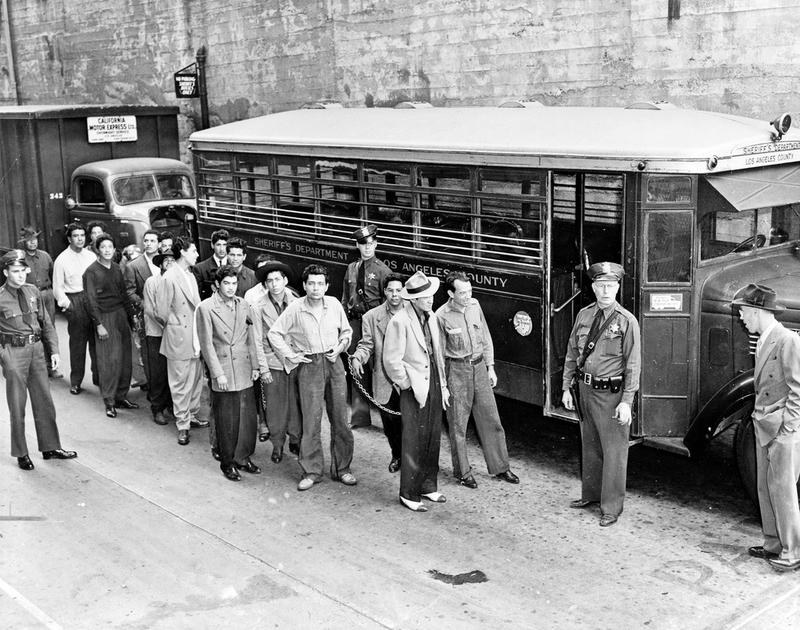 On June 8, the servicemen were banned from leaving their barracks, and the en masse attacks on young men came to an end. The next day, the Los Angeles City Council issued a ban on zoot suits. As the surge of violence calmed down, papers from across America blamed young people for the violence, not the soldiers who carried it out. The Los Angeles Times insisted that the servicemen were giving the zoot suit–wearing young men a "moral lesson," and the Minneapolis Star argued that the people who had been assaulted must have been guilty of something because the military would never go so bananas on innocent people. That never happens.