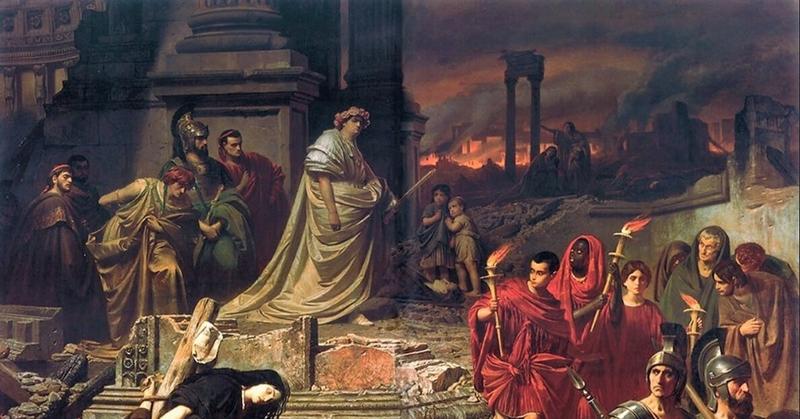 (Carl Theodor von Piloty/Wikimedia Commons)
On July 18, 64 A.D., the Great Fire of Rome burned nearly two-thirds of the city to the ground. This was no ordinary fire: It burned for nearly a week before it was put out and then started again, and no one is quite sure how. The fire is probably most famous for being the one Emperor Nero fiddled through—or did he? The Great Fire of Rome may be shrouded in mystery, but there are some things we know for sure.

Nero was only 16 years old when he inherited Rome in 54 A.D., and teenage leaders are generally bad news, whether at a drive-thru or on the throne. Nero was an exceptionally exemplary case: His cabinet managed to rein in his ruthless whims for a while, but by the time he had his mother killed at the behest of his mistress, Nero was impossible to control. Many believe the Great Fire of Rome was, in fact, simply one of these whims, but even if he had no direct hand in its inception, he certainly created an environment rife with unrest and paranoia. 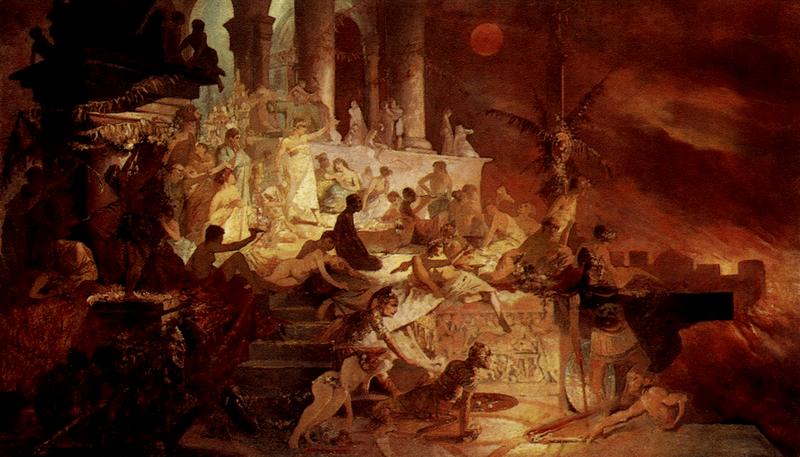 We don't know a whole lot about the Great Fire of Rome because apparently, nobody really looked into it too hard at the time. If they did, they didn't write it down. Much of the research concerning the Great Fire of Rome comes from Publius Cornelius Tacitus, a Roman senator who was only about eight years old when the fire broke out. In his work from 116 A.D., The Annals, Tacitus wrote that the fires began near the Circus Maximus, an area surrounded by shops and storage areas, but the windy evening pushed the fire through the narrow passageways into the surrounding neighborhoods, picking up steam from the many flammable goods around the Circus along the way. 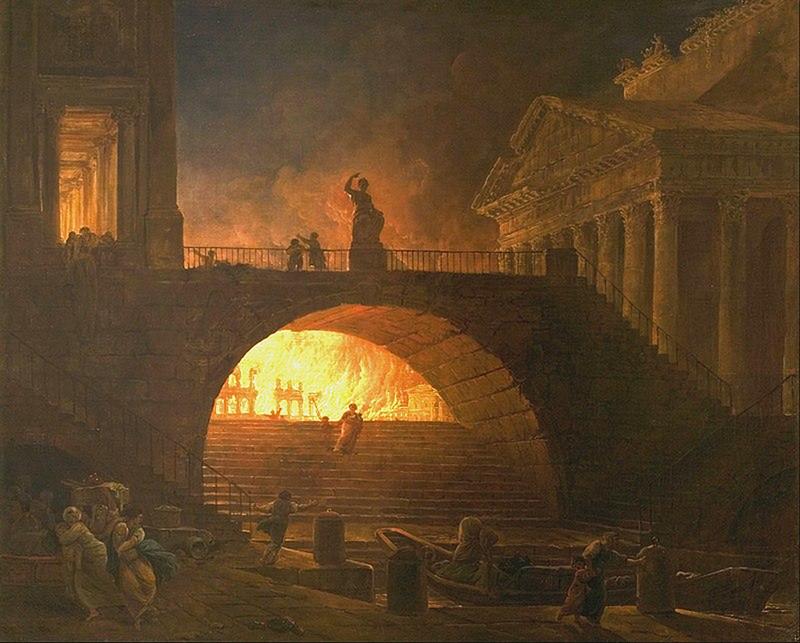 
Did Rome Burn Itself?

According to some of the witnesses Tacitus interviewed, the fire may have been intentionally helped along (or even started) by his fellow Romans. While most attempted to flee in terror, some took advantage of the opportunity to loot and rob the town, while others even actively aided the fire by throwing small torches around and preventing anyone from trying to put it out. Maybe they were simply looters who didn't want anyone raining on their parade, or maybe they were acting under orders, as they claimed. Whatever the case, the fire soon proved inescapable, and countless trapped Romans eventually just lay down to die.
It took six days for the fire to die out, but before the survivors could celebrate what was left and return home, it broke out once more in an open region of the city, destroying temples and gathering places. Only four of Rome's districts remained intact, while the other 10 were left in ruins. 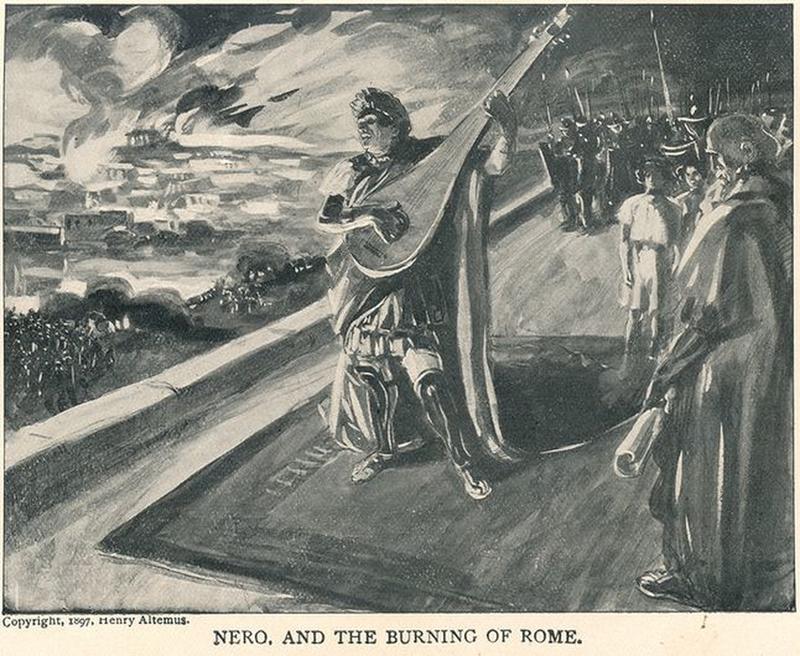 Where was Nero during all of this? With at least six different versions of the story from Tacitus, Pliny the Elder, Fabius Rusticus, and others, it's likely that we'll never really know. The whole fiddle thing can be traced to Roman historian Cassius Dio, who actually wrote that Nero was playing the lyre in his palace on the Palatine Hill in celebration of his awesome plan to set fire to the city, but there was almost certainly no arson party of any kind. Nero was 35 miles away in Antium at the time.
Of course, that doesn't mean Nero was innocent. In fact, many historians think Nero's absence was a little too convenient. The prevailing belief is that Nero hired a group of arsonists to immolate the city so he could clear space for a new palace, and he was vocal about hating the way the place looked and his desire to rebuild the entire city. Still, Tacitus remained firm in his belief that the destruction truly was an accident that caught Nero by surprise, citing the Emperor's efforts to aid the survivors that went so far as offering his own palace as shelter. According to Tacitus:

Supplies of food were brought up from Ostia and the neighboring towns, and the price of corn was reduced to three sesterces a peck. These acts, though popular, produced no effect, since a rumor had gone forth everywhere that, at the very time when the city was in flames, the emperor appeared on a private stage and sang of the destruction of Troy, comparing present misfortunes with the calamities of antiquity. 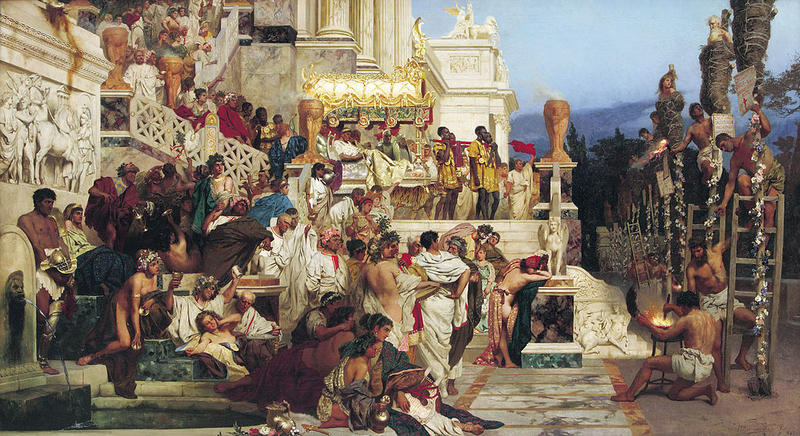 Whether he was involved or not, Nero certainly benefited from the destruction of Rome. He was finally free to rebuild the city in his vision, but the theories about Nero's connection to the fire only deepened when the Domus Aurea, or the "Golden House," was constructed on top of the ruins of the city. Nero's new palace featured vineyards, an artificial lake, and a 98-foot statue of the mad emperor.
To take the heat off, Nero blamed Christians for starting the fire. At the time, members of the new religion were easy scapegoats, so it wasn't hard for Nero to round up hundreds of them to horrendously torture with the full backing of his people. You know, just in case you were starting to feel like history has been unfair to the guy.