(Bibliothèque nationale de France/Wikimedia Commons)
On July 14, 1789, A.K.A. Bastille Day, a crowd of Parisians stormed the Bastille and demolished the former stronghold of France. As a symbol of the French Revolution, the Bastille was important not only as a symbol of the silencing power of the upper class but as evidence that people can make their voices heard, no matter how small they feel.

Ahead Of Its Time

During the Hundred Years' War between England and France, the Bastille was built to protect Paris from an attack from the east. Construction of the towers began in 1370 and finished during the reign of Charles VI, around 1380. As one of the strongest fortified buildings of the era, the Bastille was a garrison that was ahead of its time. Historians note that the Bastille's walls and towers stood at the same height, which allowed soldiers to move through the fortress with ease rather than travel from level to level whenever strategy dictated. By 1420, Henry V had taken over the Bastille, which he used more as a prison than a military stronghold. It was reclaimed 16 years later after a standoff between the French and the English that resulted in Henry's men forfeiting the fortress, but its rightful owners had to admit he was onto something. 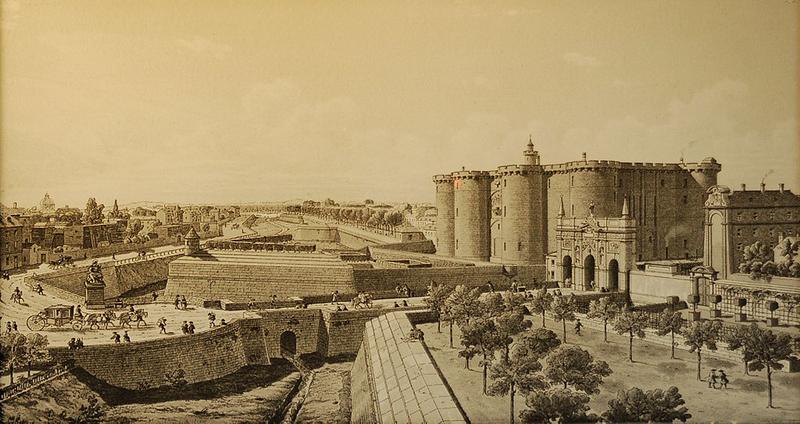 During the reign of Louis XI in the 15th century, the French monarch operated the Bastille both as a royal castle and a state prison. Royal functions were held and foreign dignitaries stayed at the Bastille, all while prisoners of the state were kept in their cells. As the years progressed, subsequent monarchs fortified the Bastille further and further. Henry II removed all the exits and entrances until there was only one way in and out of the stronghold, and the building's gatehouse was changed to a massive arch under his direction. In 1660, Louis XIV ordered the installation of a new archway at the Porte Saint-Antoine, and 10 years later, the walls of the city leading to the Bastille were torn down and replaced with trees, basically turning the area into a suburb dominated by a defunct military fortress. Prisoners used the building's bastion as a garden. 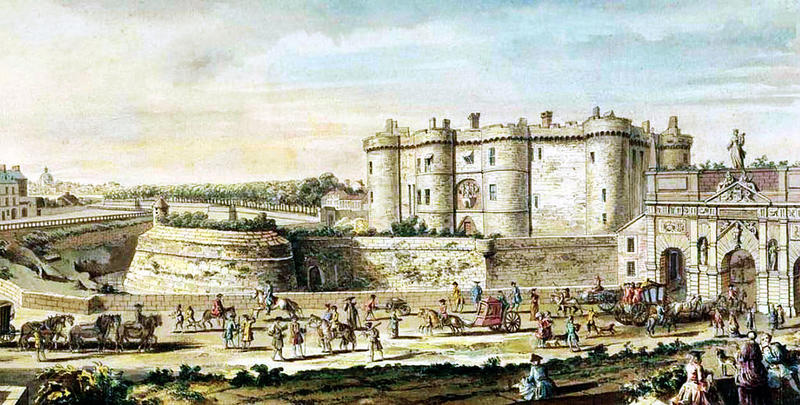 Louis XIV detained more than 2,000 prisoners in the fortress during his reign for crimes ranging from espionage to disagreeing with the king over personal and religious matters. If you were French and on the wrong side of the king in the 1600s, you were destined to end up in the Bastille.
The Bastille wasn't like any prison, though. To be detained in this fanciful stronghold, a strange ceremony had to take place, beginning with a "lettre de cachet," or "a letter under royal seal," that was written by the king and signed off by a minister that listed the person to be arrested and their crime. From there, the prisoner was arrested when a member of the king's guard tapped them on the shoulder with a white baton. Unlike normal prisons, the inhabitants of the Bastille were mostly kept a secret, and many of them were political enemies of the king. 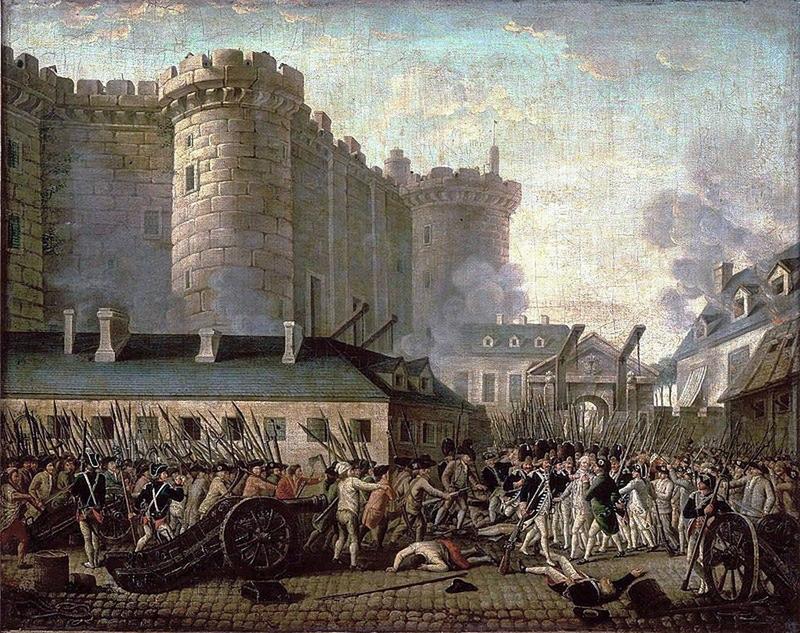 By summer 1789, the Bastille was no longer the political stronghold that it once was, but it was still considered a symbol of the French monarchy. By its final days, the fortress that used to hold hundreds of prisoners at a time only held seven, but no one on the outside knew that because of the secrecy surrounding the complex. As far as Parisians knew, when you entered the Bastille, you didn't come out. This intrigue was exacerbated by French erotica writer and sex pest the Marquis de Sade, who was sentenced to the Bastille in 1784. Days before the Bastille was stormed, De Sade shouted from the window of his cell, "They are massacring the prisoners; you must come and free them!" It's not clear if the Marquis's call to Parisians was the catalyst for the destruction of the Bastille, but it was only a few days until revolutionaries stormed its walls. 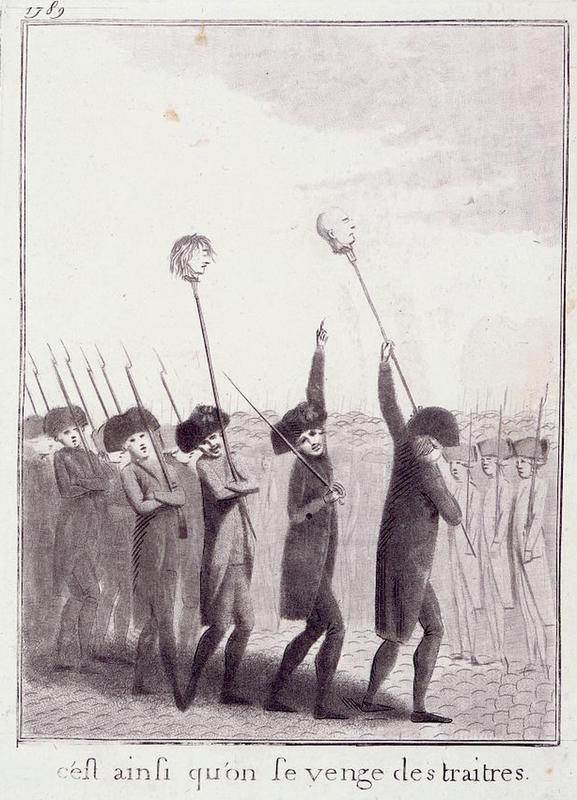 
You Could Say Talks Broke Down

Whatever the case, the Bastille's military governor, Bernard-René Jordan de Launay, had felt the revolution gaining momentum. He ordered 250 barrels of gunpowder and raised the drawbridges of the prison in preparation for a siege, and sure enough, a crowd of Parisians made their way to the Bastille and demanded that the government surrender the fortress to the people on July 14, 1789. Despite the reinforcements in and around the fortress, the crowd held their ground, and by midday, negotiations began between revolutionaries and the soldiers.
Early in the afternoon, however, the crowd grew restless and stormed the outer courtyard before climbing the gates and lowering the prison's drawbridge. As soldiers fired on the people, chaos broke out. Revolutionaries sacked the Bastille all afternoon until De Launay ordered a ceasefire at 5:00 P.M. He realized the limited number of soldiers at his disposal wouldn't hold off the citizens for long, and less than an hour after the ceasefire, the prison was liberated. At least 98 revolutionaries died in the attack, but so did De Launay and a nobleman named Jacques de Flesselles, whose heads were impaled on pikes and paraded through the streets.

Stories of prisoners heaped upon prisoners were rampant throughout the Parisian streets, but when the revolutionaries finally took the Bastille, they only found seven prisoners in total. The Marquis de Sade had already been transferred to new digs on account of all that hollering, and the only people left were four convicted forgers, someone who may have been named the Count de Solages (although he may be a conflation of other prisoners), and two mentally ill men, who were paraded through the streets.
Once the Bastille was emptied out, it was decided after some debate that the monument to the French aristocracy should be destroyed. By November 1789, the Bastille was no more. What does remain of the Bastille has been repurposed to build the Pont de la Concorde bridge and as a display on Boulevard Henri IV. The key to the Bastille isn't even in France. It was given to George Washington as a gift by the Marquis de Lafayette and can be seen at the president's home in Mount Vernon. Today, the July Column stands where the Bastille once stood, but the annual celebration of Bastille Day ensures no one in France will forget the destruction of this fortress during the French Revolution.