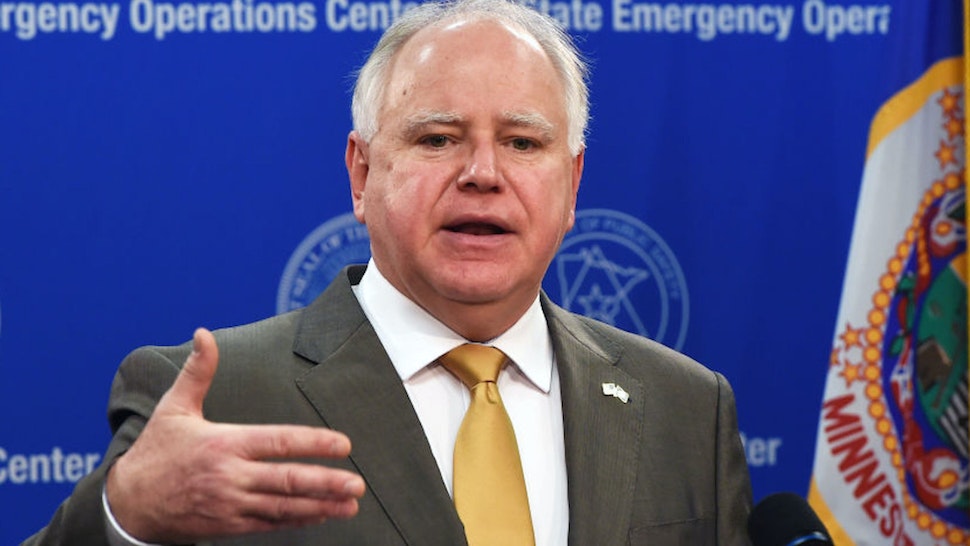 Democratic Governor Tim Walz responded to President Donald Trump’s decision to reject his $500 million bailout request for the damage caused by the weeks-long violent rioting in Minneapolis in the wake of the death of George Floyd.
Gov. Waltz was widely criticized for his slow reaction to the violence, particularly by President Trump.
“Walz, a Democrat, requested that Trump declare Minnesota a ‘major disaster’ zone in a request to the Federal Emergency Management Agency on July 2 after more than 1,500 buildings were damaged by looting and rioting in the wake of Floyd’s death, totaling over $500 million in damages,” The Washington Examiner reported.
The Democrat says he is “disappointed” in Trump’s rejection of the financial aid.
“The Governor is disappointed that the federal government declined his request for financial support,” said a statement from Walz’s office. “As we navigate one of the most difficult periods in our state’s history, we look for support from our federal government to help us through.”
Republican Rep. Tom Emmer, elected by Minnesota’s 6th congressional district, lobbied the president to reject the aid, the Examiner noted.
“If the federal government is expected to assist in the clean-up of these unfortunate weeks, it has an obligation to every American — prior to the release of funding — to fully understand the events which allowed for this level of destruction to occur and ensure it never happens again,” Rep. Emmer said in a  letter to the administration.
Though Waltz was displeased, conservatives rejoiced at the news.
Conservative author and host Mark Levin, for example, praised President Trump for rejecting the bailout.
“Great decision,” he said via Twitter. “The president offered the National Guard but the pathetic governor waited and waited. And now the Minneapolis city council votes to abolish its police department. Pay for your own man-made hell.  So much for utopia.”“Wise,” Jenna Ellis, a senior legal advisor for Team Trump, called the move. “You want to defund police and let the woke mob run wild, do it on your own dime, Gov. You should have asked the President for help BEFORE you incurred this much damage.”
“Great news! [Donald Trump] has DENIED Minnesota’s disaster request to repair half a billion dollars in damage from the riots,” reacted South Carolina Republican Rep. Jeff Duncan. “Governors and Mayors who ordered police to stand down and watch their cities burn shouldn’t get a penny in taxpayer aid!”
During the unrest, Trump blasted Minnesota Democrats for their response or lack thereof.
“And we saved it (Minneapolis) by me enforcing and sending the troops in, the National Guard,” Trump posted via Twitter, last month. “I insisted on it. But that was after four days, they should have done it on night number one, instead of having the police run away, give up the precinct.”
“After it got out of control for four days, we sent in representatives, commonly known as the National Guard, and it was all put down very quickly,” the president added.
A Minnesota CBS affiliate reported on the timeline, in part:

The protests-turned riots erupted across the nation in late May, in response to the death of Floyd. The violent rioting spilled into in a number of cities, including, of course, Minneapolis, as well as Los Angeles, Washington, D.C., Atlanta, New York City, Rochester, Richmond, Chicago, and others.
Floyd, who is black, died after a police officer had his knee on the 46-year-old’s neck for over eight minutes during an arrest, as shown in viral video footage. Since the incident, all four officers involved in the arrest have been fired, investigations from the FBI and state law enforcement have been opened, and the officer at the center of the incident was taken into custody and charged with second-degree murder.