American disc jockey Steve Dahl (center, holding helmet) poses with members of the crowd during an anti-disco promotion at Comiskey Park, Chicago, Illinois, July 12, 1979. (Getty Images)
Many lovers of music will tell you that disco died on July 12, 1979. It was murdered by an overzealous shock jock, a brilliant promoter, and several thousand rabid rock fans on the infield of Comiskey Park, home of the Chicago White Sox. While many see the infamous Disco Demolition Night as merely a publicity stunt to poke fun at the rift between two genres of music, others look back at this event and wonder if it was really the music these frothing hordes had a problem with. 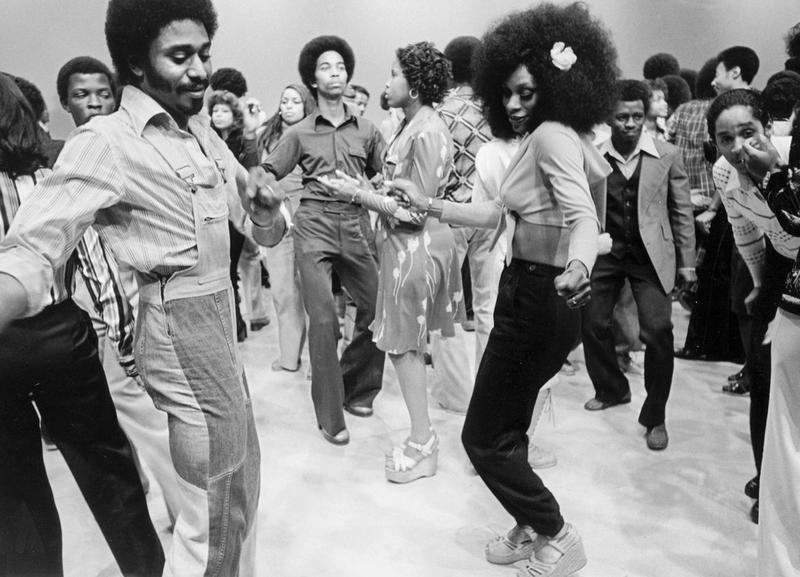 Disco music was popular with the black community in the 1970s. (busboysandpoets.com)

For decades, rock and roll ruled the airwaves. While it was novel and controversial (and, incidentally, less white) in its early days, by the time the Beatles took over the world, it had become squarely the language of white men. At the same time, black and Latino audiophiles began flocking to the dance clubs of New York City. Unlike the megastars of rock and roll, the artists behind the new sound emerging from these clubs were diverse in race, gender, and everything in between. By the late 1970s, the disco craze had swept the nation. Featured in several wildly popular movies, most notably Saturday Night Fever, disco music was gaining momentum. 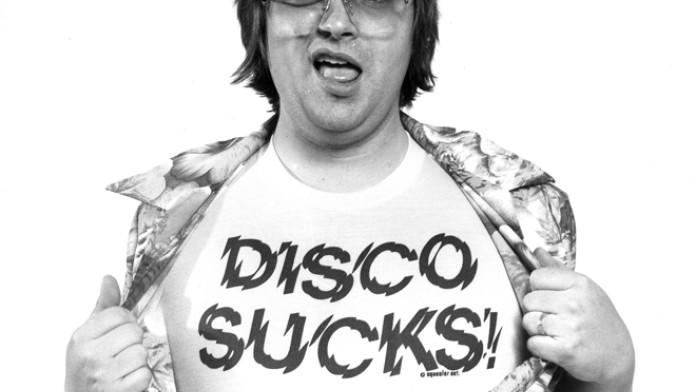 Music fans of the 1970s were divided along these genre lines. Chicago radio DJ Steve Dahl, one of the earliest talk radio hosts and proto-shock jocks, used his platform to drive the wedge even further between rock and disco. Like many rock fans of the late 1970s, Dahl viewed disco music as inauthentic and spoke frequently of his disdain for shiny disco balls, white three-piece suits, and oversize medallions. His rhetoric got him fired from at least one radio station, but it didn't slow his hatred. Dahl referred to disco as a "disease" and believed it was his mission to eradicate it. 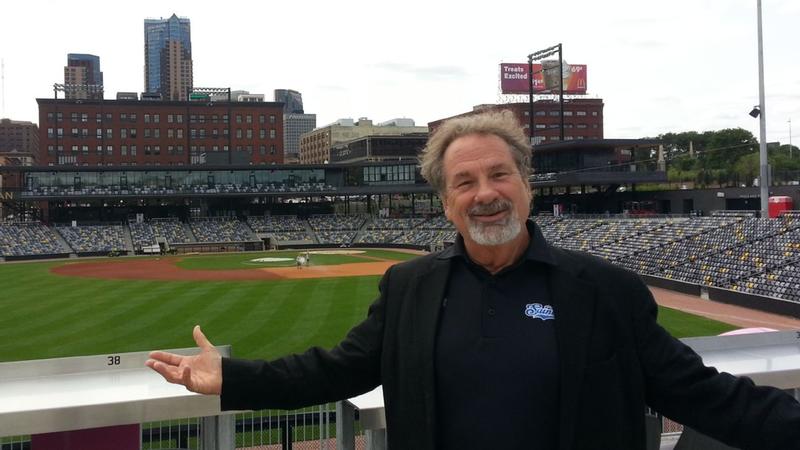 Mike Veeck was the brains behind Disco Demolition Night. (espn.com)

In the late 1970s, the Chicago White Sox were owned by Bill Veeck, an astute businessman who was skilled at pulling in large crowds. He had a history of hosting some strange and provocative promotional events at the White Sox's home field, Comiskey Park, but by 1979, the crowds were thinning out. Veeck and his son, Mike—the team's assistant manager in charge of promotions—decided they needed something big to reignite the city's interest in baseball. As it happened, Mike Veeck was a frequent listener of Dahl, who had recently left one Chicago radio station when it switched to a disco format for a rival rock station. 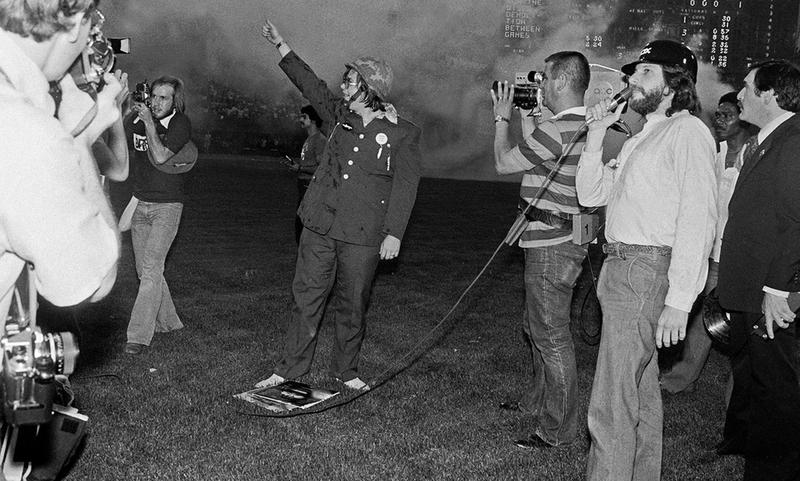 Steve Dahl hated disco, but some people claim he was just a racist homophobe. (aeon.co)

Dahl had a gimmick that he used to signal the beginning of the each shift. He started to play a disco record, but after a few seconds, listeners heard the sound of the needle scratching across the record, followed by the sounds of an explosion, all while Dahl chanted "Death to disco!" Dahl had even begun hosting "Death to Disco" nights at area nightclubs. At these events, the outrageous DJ smashed disco albums while fans chanted "Disco sucks!" and "Death to disco!" 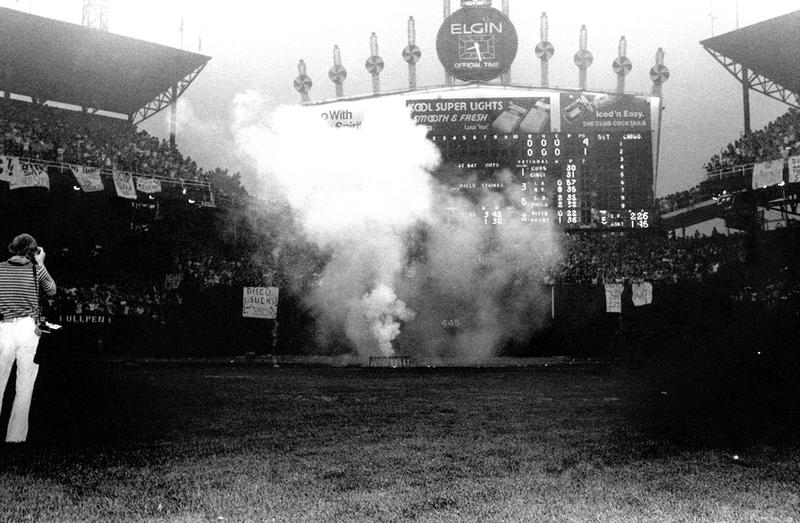 One day, after concluding his normal early morning shift at the radio station, Dahl was confronted by Mike Veeck. "I've got a crazy idea," he told the DJ. "Hear me out." He outlined his plan for Dahl to host a large-scale Disco Demolition Night during an upcoming doubleheader on July 12, 1979 at Comiskey Park. Veeck suggested that they lower the admission price to the game to just 98 cents for every attendee who brought a disco record with them, which he wanted Dahl to blow up during the break between games. Dahl agreed and immediately began promoting the event on his radio show. 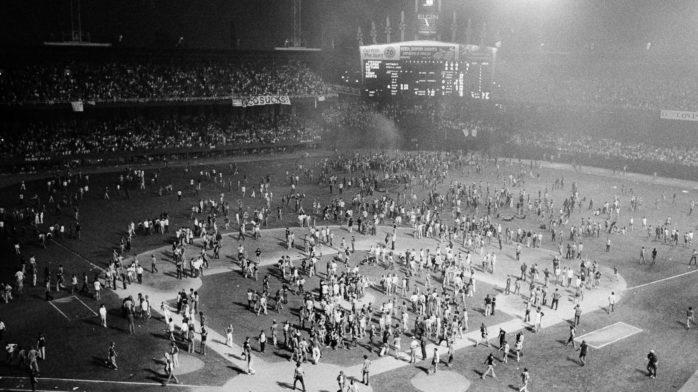 
Out Of Control Fans

On the day of the doubleheader, more than 48,000 people crowded into Comiskey Park. This was well over the approximate attendance numbers that Veeck had discussed with security, and it was clear from all the vinyl they were carrying that they were not there for good old-fashioned sports. Unable to contain their excitement until the break, many of them chucked their stockpiles onto the field during the first game and chanted "Disco sucks!" so loudly that it drowned out the announcers. 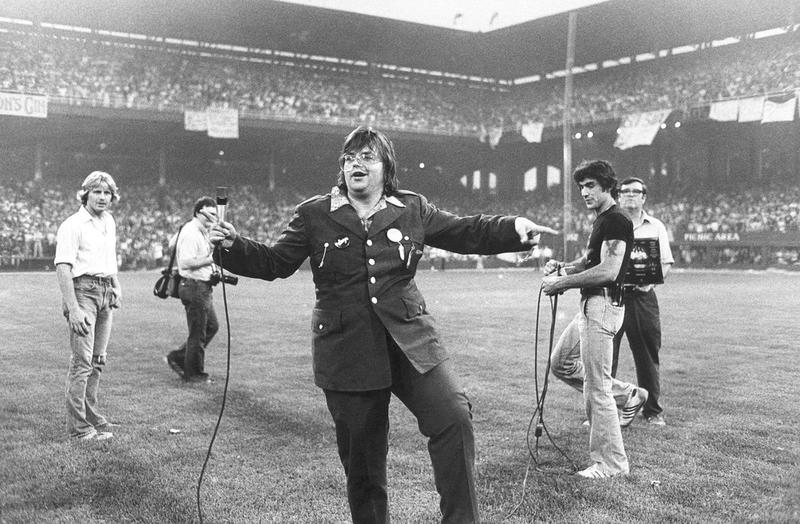 As the White Sox and their opponents, the Detroit Tigers, retreated to their respective dugouts to prepare for the second game, Dahl rode out onto the field in a military jeep, wearing army green and a helmet. He was clearly prepared to go to war against disco, but it was more like a massacre. He rallied the onlookers with his anti-disco sentiments, and although he later claimed that he hadn't thought to prepare a speech, his words were powerful enough to whip the crowd into a near frenzy. 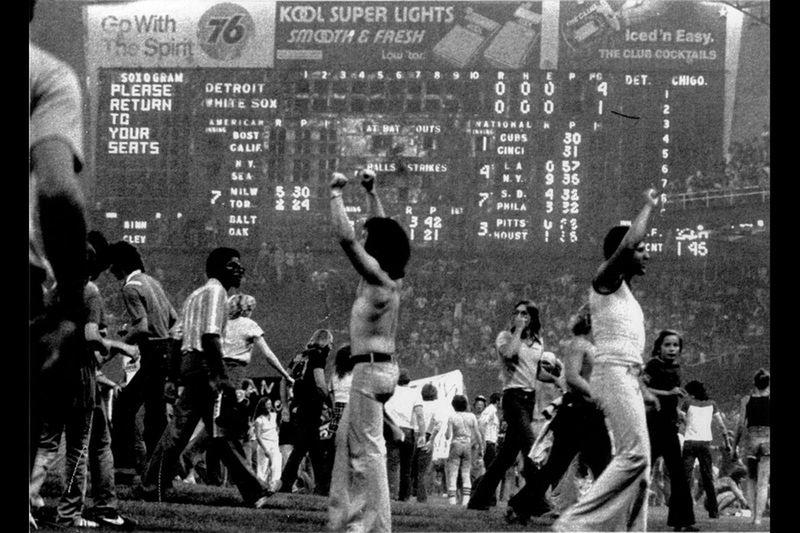 Police riot control officers on horseback were called in to disperse the crowd. (chicagotribune.com)

As Dahl concluded "We rock n rollers will resist, and we will triumph," he gestured to a large box full of disco records that had been brought out to center field. A fuse was lit, and a moment later, a massive explosion rocked the crowd. Scraps of vinyl flew into the air, a smoking crater appeared in the ground, and mayhem erupted. Disco fans threw beer cans, firecrackers, and cherry bombs at Dahl, while disco haters threw more records onto the field. More than 7,000 people rushed the field, and the inadequate security staff couldn't stop them. They ripped up the bases and pitcher's mound, flung vinyl shrapnel into the air, pulled up chunks of turf, and burned banners and signs.
Officials from both the White Sox and Tigers tried to calm the crowd, and even police riot control officers on horseback were called in, but it was no use. Even if they could 86 over 7,000 people, the field had taken so much damage that it was unplayable. The White Sox were forced to forfeit the second game to the Tigers, marking only the fourth time a team had to forfeit a game in the modern era of major league baseball. 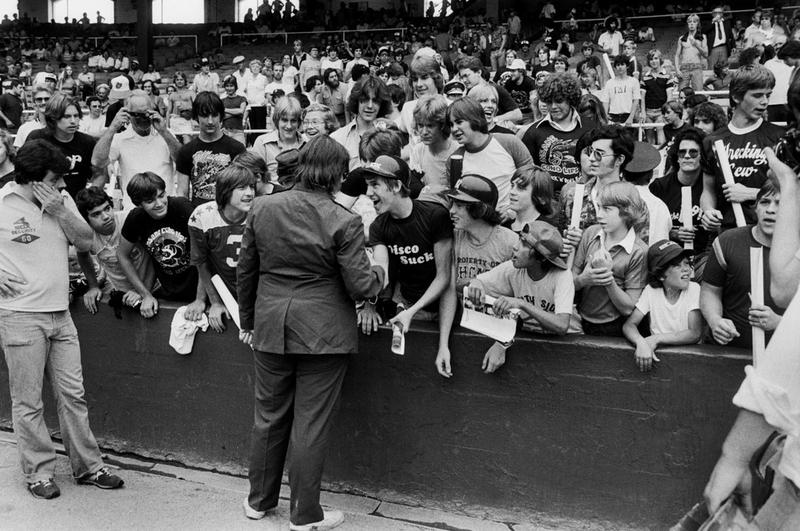 In the years after Disco Demolition Night, people have claimed that Mike Veeck and Steve Dahl had more sinister motivations. Because disco was the preferred music genre of the black, Latino, and gay communities, they claim that Veeck and Dahl were attempting to repress minority voices. Veeck disputed this claim, insisting that the event "simply had to do with choosing between rock and disco. We were just having fun." Dahl added, "I understand now that there was an underground gay disco scene, but I was unaware of that at the time. We were unaware of the origins of disco. To us, it was about Saturday Night Fever."