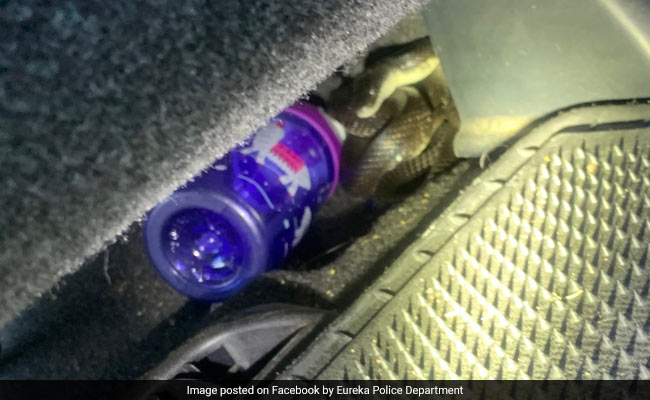 A woman found a snake slithering inside her car, causing her to flee the vehicle.


Police in the US state of Missouri recently received a call from a woman who sounded hysterical. Turns out, she had found a snake in her car, parked it on a highway and fled the vehicle upon making the shocking discovery.
In a Facebook post, Eureka Police Department said the woman found the snake in her car on Thursday morning while travelling on an interstate. "Young lady driving was surprised by a snake working its way through the driver compartment," police wrote, adding that she "called hysterically" for help.
When cops arrived to remove the snake, they found that it had made itself quite comfortable inside the car and refused to be moved. At the car owner's request, the vehicle was towed to a different location with the snake still inside. "We could not get the snake out. The car was towed at owner's request to a location where we will wait for the little guy to show himself and hopefully leave the vehicle peacefully," Eureka Police Department wrote in their Facebook post while sharing a picture of the snake.
According to police, the snake decided to move out after a bit and fled the vehicle. After that, the driver recomposed herself and continued on her journey.
Details of the incident surprised many, with the Facebook post collecting nearly 200 'shares' and hundreds of comments.
"I would of wrecked trying to get off the highway!" wrote one person in the comments section.
"And this is the point you'd be responding to a car fire if it were me," another said.


In 2018, a Wisconsin woman who pulled over because her car was "running strangely" was shocked to discover the reason - a python in the engine compartment.
Posted by free heip at 05:18