John Dillinger: Escape Plans, Bank Robberies, And Everything You Didn't Know About The Famous Crook 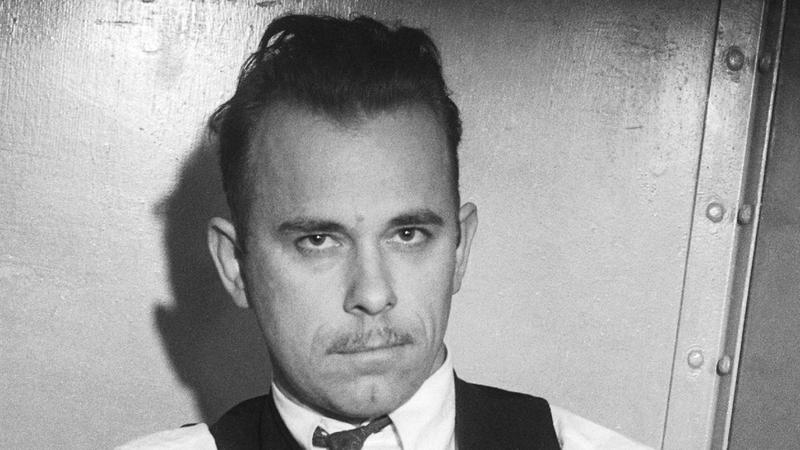 During the Great Depression, there were no superheroes, but there was a very real Robin Hood. John Dillinger was a bank robber who led the FBI on a year-long manhunt, during which he and his "Dillinger Gang" robbed an impressive 12 banks. Every bit the antihero, Dillinger lived a life that most people only dream about, provided they have a loose sense of ethics. He escaped from prison multiple times, openly antagonized the authorities, and even robbed plural police stations. Was he a bad guy? Sure. But he made being bad look fun.

Born in 1903 in Indianapolis, Indiana, Dillinger found ways to get himself in trouble from an early age. His first arrests when he was a teenager were mostly for theft, but he also liked to fight. After he dropped out of high school, his father thought that the best thing for the family was to move out of the city to keep his son out of trouble, but that plan backfired when Dillinger was arrested for stealing a car in his new neighborhood of Mooresville, Indiana.
His first big-time arrest appeared to be the closest Dillinger got to a wake-up call because he tried out variations of a normal life for a while. He joined the Navy for a spell before deserting and even got married when he was 21, but he was an outlaw at heart and couldn't live the life of a family man. In 1924, he and a friend named Ed Singleton decided to rob a grocery store, making off with $50 before they were apprehended one day later. Because Dillinger assaulted the grocer with a machine bolt wrapped in a sack but also carried a gun for some reason, he was sentenced to 10–20 years in prison. 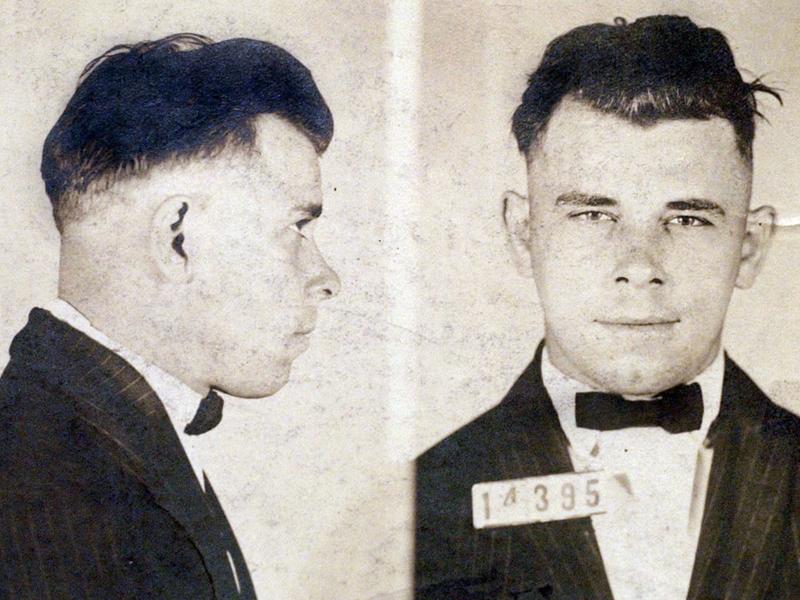 Upon his arrival, Dillinger supposedly told prison officials, "I will be the meanest bastard you ever saw when I get out of here," and he honored that promise. While he was in the joint, Dillinger studied the teachings of the father of modern bank robbery, Herman Lamm, among other fellow prisoners. When he was paroled on May 10, 1933, nearly 10 years after he was sentenced, he started robbing banks because—he insisted—he couldn't find work at the height of the Depression. To be fair, he probably didn't look very hard.
That June, he stole $10,000 from the New Carlisle National Bank in New Carlisle, Ohio before moving on to a bank in Bluffton and finally succumbing to arrest in Dayton. He was transferred to a prison in Lima, Ohio, which turned out to be a stroke luck for the gangster. 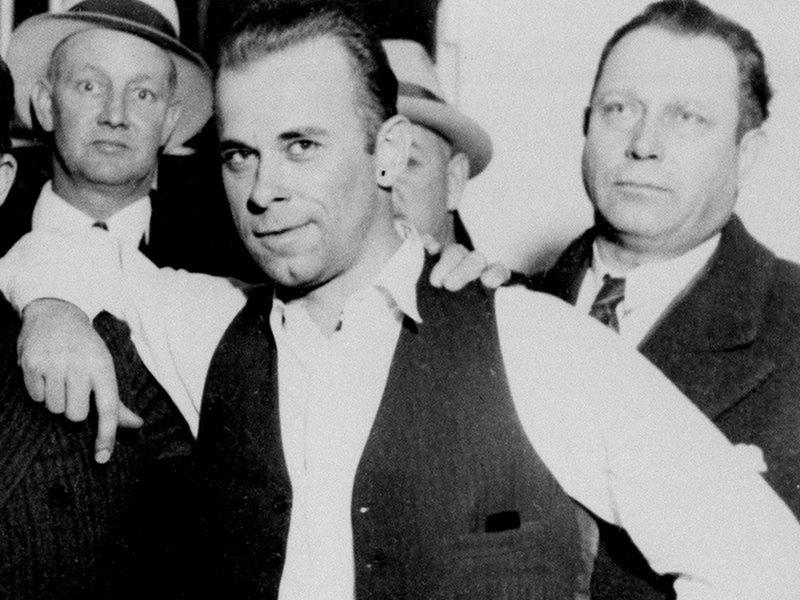 By the time he was arrested for robbing the bank in Bluffton, Dillinger had already begun hatching a scheme to bust out his prison buddies so they could tag along for the ride. He arranged for three .38 pistols to be hidden in a crate of thread making its way to the Indiana State Prison's textile factory, which his friends—"Handsome" Harry Pierpont, Charles Makley, John Hamilton, and seven others—used the guns to turn the tables on their guards and escape. They made their way to the jail in Lima, Ohio on October 12, 1933 and walked right through the front door to rescue Dillinger. In the fray, they ended up shooting the sheriff. 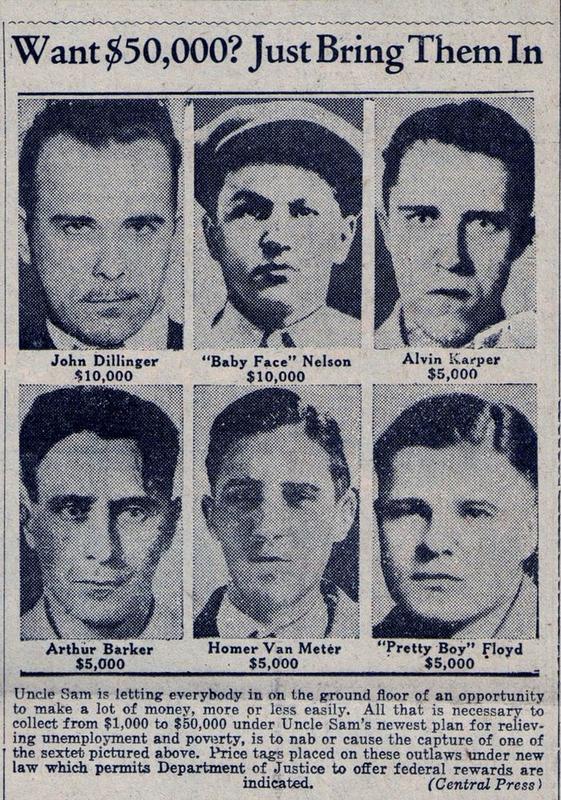 It's one thing to rob banks, but the Dillinger Gang were so sure of themselves that they took up robbing the police whenever they needed weapons and ammo. In October 1933, they barged into police stations in Auburn and Peru, Indiana and faced off with cops as they scrambled to pilfer supplies. They even managed to lift some bulletproof vests and a submachine gun from the station in Auburn. They immediately put the stolen weapons to work over the course of a crime spree that involved a dozen banks and the deaths of at least two police officers. 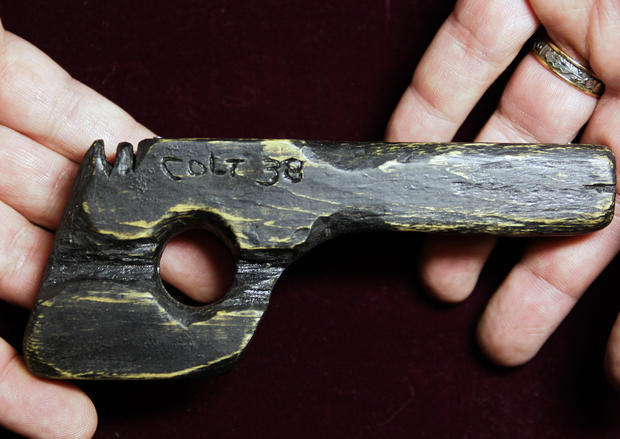 Dillinger's fun almost came to an end in January 1934, when he was arrested in Tucson, Arizona after his famous face was recognized by the locals. He was extradited to Indiana to await trial and locked up in the jail in Crown Point, which was supposed to be "escape-proof." What happened next is up for debate, sort of.
Dillinger either carved a fake gun out of wood and a coat hanger before painting it black with shoe polish, or his lawyers sent him one. Whichever equally outlandish means by which Dillinger acquired his fake gun, it convinced the guards to let him make his way to the armory, where he got his hands on an extremely real submachine gun. From there, he had no problem driving away in the sheriff's car to Chicago, which was really the place to be for a gangster in the '30s.

Towards the end of Dillinger's crime spree, he found himself with his back to the wall at a inn in Little Bohemia, Wisconsin. After the Department of Investigations (now the FBI) pulled up and started shooting, Dillinger made a getaway in a 1930 Model A, but while passing through St. Paul, Minnesota, he was caught in an another firefight with the DOI. The man riding with him was wounded, but Dillinger hightailed it to Chicago, where he swapped the Model A for a 1934 Ford V8. Somewhere along the way, he dropped off a letter for Henry Ford that read:

Dear Mr. Ford -I want to thank you for building the Ford V8 as fast and as sturdy as you did, otherwise I would not have gotten away from the coppers in that Wisconsin, Minnesota, case.Yours till I have the pleasure of meeting you.

In their short crime spree, the Dillinger Gang made off with about $500,000, but that's peanuts compared to what the government spent chasing them down. Supposedly, the FBI brought multiple agents onto the payroll who were specifically dedicated to hunting the people's favorite criminal, on top of the gas, guns, and ammo that they hemorrhaged every time they followed Dillinger across the Midwest. In total, it cost nearly $2 million to bring him down, but it wasn't a total loss for the burgeoning agency. The expensive case legitimized the bureau to the American public. 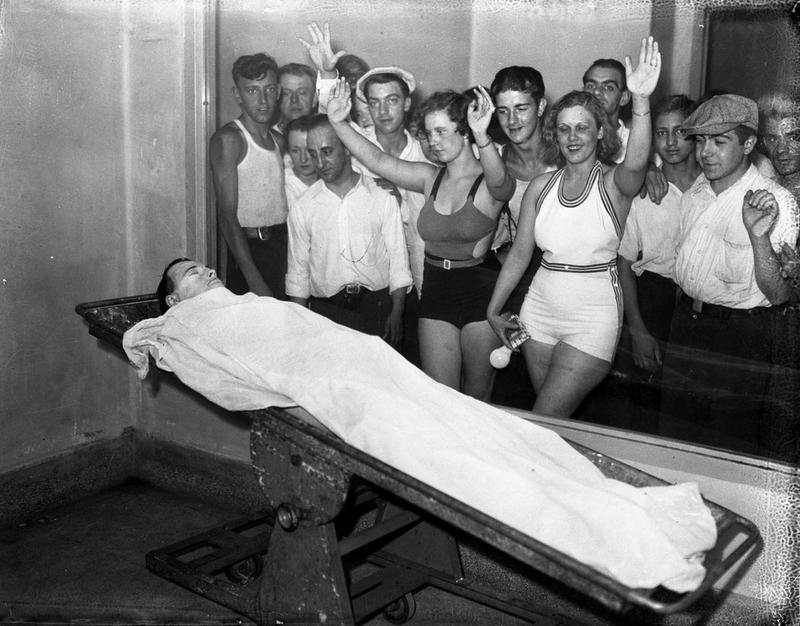 
Death At The Movies

Dillinger did his best to keep a low profile in 1934, but the heat was closing in on the criminal. He hunkered down in Chicago, but with a massive reward on his head and throngs champing at the bit to turn him in, he ventured out to see Manhattan Melodrama at the Biograph Theater with some lady friends on July 22, 1934. It was his friend, brothel owner Anna Sage, who reported this turn of events to the FBI in return for the promise of the reward money and a halt to her deportation to her native Romania. Spoiler: She did not get them.
As Dillinger left the theater with his companions in the late evening hours, the FBI closed in. Dillinger pulled a pistol, but he was cut down by three shots from the government officials. Twenty minutes later, he was pronounced dead at the Alexian Brothers Hospital.