Kimberly Guilfoyle, the girlfriend of President Donald Trump's oldest son and a top campaign official, tested positive for COVID-19 ahead of the Fourth of July event at Mount Rushmore.
Guilfoyle, 51, tested positive ahead of the South Dakota event but her boyfriend Donald Trump Jr., 42, did not, a source familiar told DailyMail.com.
The two, who had been in Montana, traveled to South Dakota with plans to watch the fireworks display and listen to the president speak during the Independence Day celebration.
She and Don Jr. never met up Trump's team and, out of caution, will drive back from South Dakota all the way to the East Coast. It's likely that the long drive will come out of taxpayers' pockets and that the agents overseeing the trip will need to isolate for two weeks.
It's become customary for people within Trump's circle to be regularly tested for the virus as the pandemic continues to grip the country and infections surge in the southern US
Guilfoyle's diagnosis comes after she and Don Jr. was reportedly spotted at a bustling party in the Hamptons last weekend.
Prior to the diagnosis, Guilfoyle reportedly did not experience any symptoms.
The campaign said Guilfoyle, who is a regular at Trump campaign rallies and hosts a weekly online show for Team Trump, is doing well and isolating.
'After testing positive, Kimberly was immediately isolated to limit any exposure. She's doing well, and will be retested to ensure the diagnosis is correct since she's asymptomatic, but as a precaution will cancel all upcoming events. Donald Trump Jr was tested negative, but as a precaution is also self isolating and is canceling all public events,' said Sergio Gor, the Chief of Staff for the Trump Victory Finance Committee, in a statement. 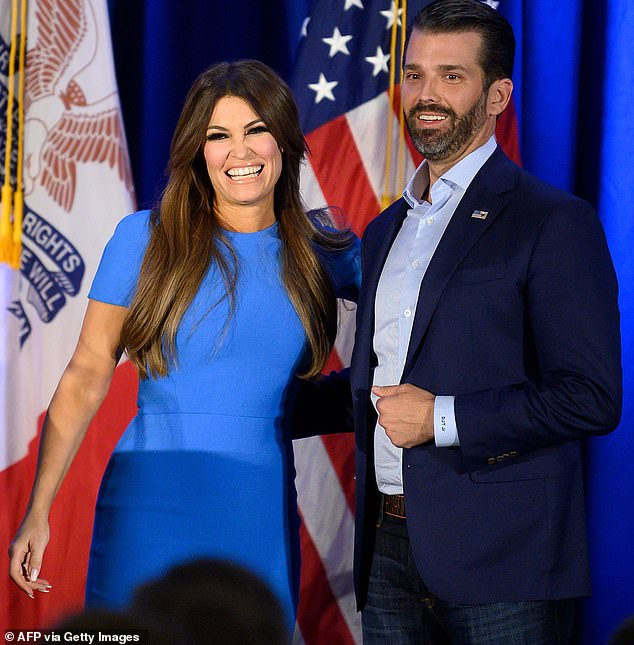 +17
Kimberly Guilfoyle (right), pictured with her boyfriend Donald Trump Jr. (left), tested positive for COVID-19 on Friday
Anyone having contact with the president is tested for the virus - a policy put into place after two White House staffers in close proximity to the president tested positive for the disease.
Guilfoyle spoke at Trump's campaign rally in Tulsa, Oklahoma, on June 20 - an event that was supposed to restart the president's re-election campaign but was besieged with problems, including lower than expected crowds and eight members of the advance team testing positive for the coronavirus.
Campaign staff, including manager Brad Parscale, self-isolated after the event to ensure they did not have COVID. And Herman Cain, the former Republican presidential candidate who was also at the rally, tested positive for coronavirus last week.
Guilfoyle was also at President Trump's June 23 event in Phoenix where he spoke to 3,000 students.
At both the Tulsa and Phoenix events, few people wore face masks or socially distanced even as coronavirus cases in Oklahoma and Arizona were on the rise.
Guilfoyle and Don Jr. were in Montana ahead of the celebration at Mount Rushmore. Former NFL safety Jack Brewer, a prominent Trump supporter, posted a photo of himself and Don Jr in the state at what appears to be some kind of event tied to the campaign, judging by the credential Brewer is wearing around his neck.
She serves as national chairwoman of the Trump Victory Finance Committee, a position that puts her in regular contact with the big-list, wealthy donors to the Trump campaign.
Several of those events were going on in the western states ahead of Trump's arrival at Mount Rushmore.
One event, the 'Mountain West Ranch Retreat,' in Gallatin Gateway, Montana, from Tuesday until Thursday, CNN reported, while a 'Rapid City Roundup Retreat' in Rapid City, South Dakota, took place from Thursday to Friday.
People attending those events told CNN they did not see Guilfoyle wearing a mask at them.
It is unclear when she last had contact with President Trump and the campaign did respond to DailyMail.com's inquiry on the matter.
The president and his campaign have come under fire for holding large-scale events as coronavirus cases rise throughout most of the country. The campaign has not scheduled another rally since Tulsa's took place.
Guilfoyle's diagnosis comes after she and Don Jr. was reportedly spotted at a bustling party in the Hamptons last weekend. 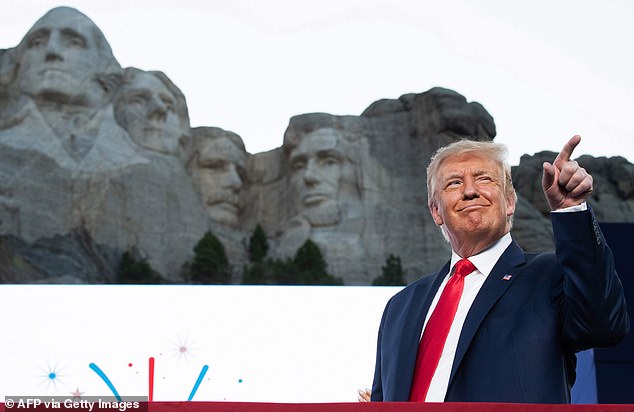 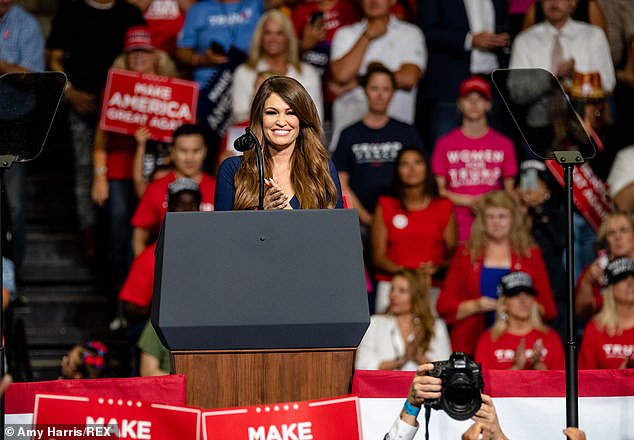 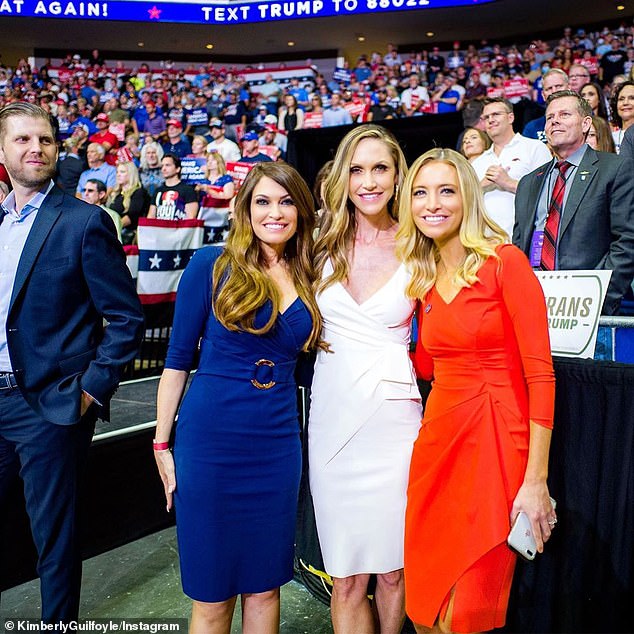 +17
Kimberly Guilfoyle posted to instagram a photo of herself, Lara Trump and White House press secretary Kayleigh McEnany at the rally in Tulsa with caption: It was great to get back out on the campaign trail over the weekend with @realdonaldtrump and our amazing team. Full steam ahead! #MAGA #KAG2020 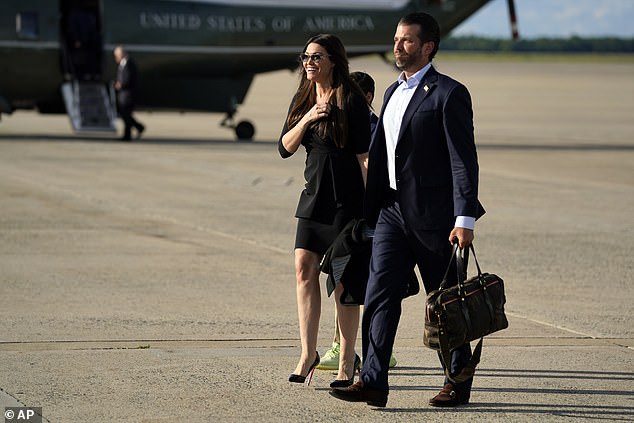 +17
Donald Trump Jr., walks with Kimberly Guilfoyle after arriving at Andrews Air Force Base, Md., on May 27 after traveling to Florida with President Donald Trump
A source told Page Six that the packed get together looked 'as if COVID had never happened.'
There were reportedly around 100 attendee who ignored social distancing and did not wear masks.
Don Jr. reportedly stayed around an hour at the rooftop party.
Guilfoyle is the third infected person to be in close contact with the president.
In May, both Vice President Mike Pence's communications director Katie Miller and a Navy valet who served Trump his food tested positive for the virus. 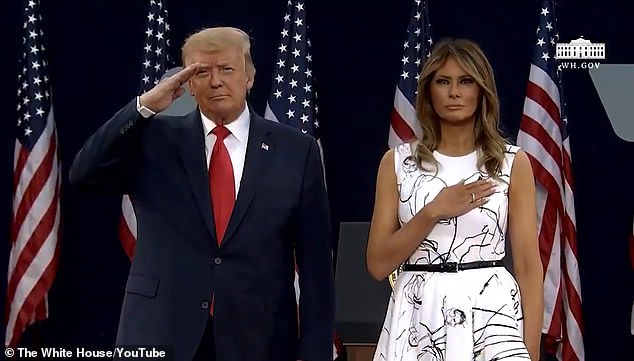 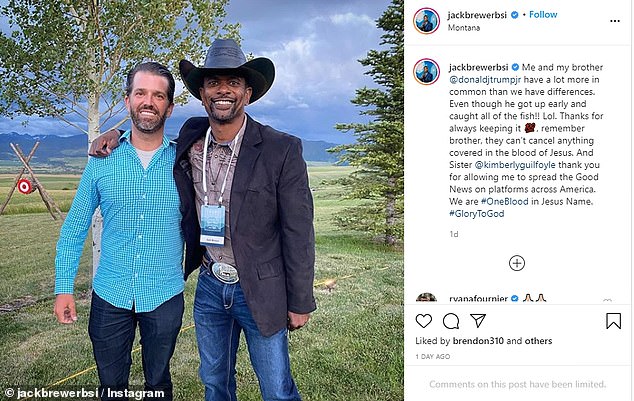 +17
Don Jr and Kimbery Guilfoyle were in Montana ahead of the Mount Rushmore event, according to this Instagram photo posted by former NFL safety Jack Brewer, a prominent Trump supporter
Over the course of the pandemic, the Trump administration has repeatedly tried to downplay the severity of the virus and all but avoided it in public appearances.
On his part, Trump has gone against the top medical experts and refused to mandate masks at presidential events.
Masks were not required at the Make America Great Again rally in Tulsa, Oklahoma and were not at the Fourth of July event, where several people in the audience of 7,500 were seen without them.
Republican Gov. Kristi Noem announced this week that neither masks nor social distancing will be required of attendees.
Before Trump's arrival in South Dakota, he was spotted at his private golf course in Sterling, Virginia, appearing to ignore coronavirus health guidelines. 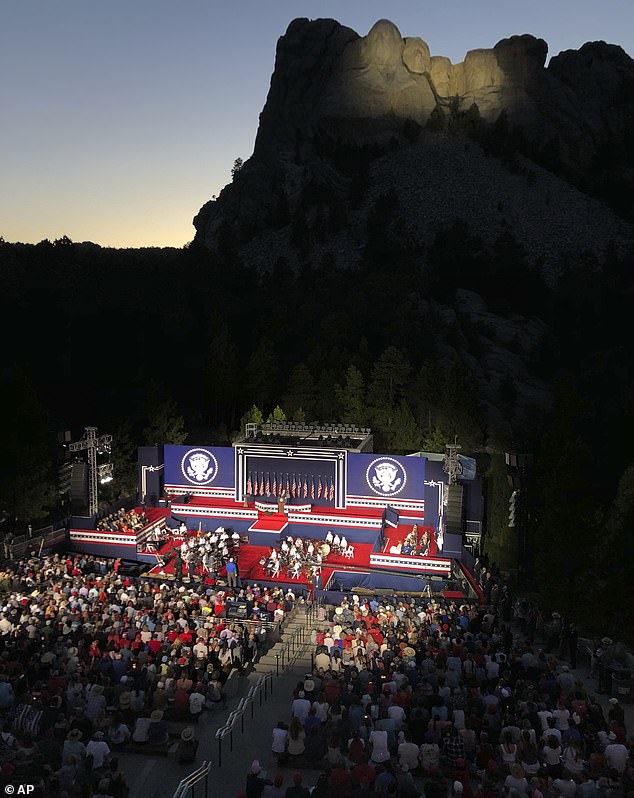 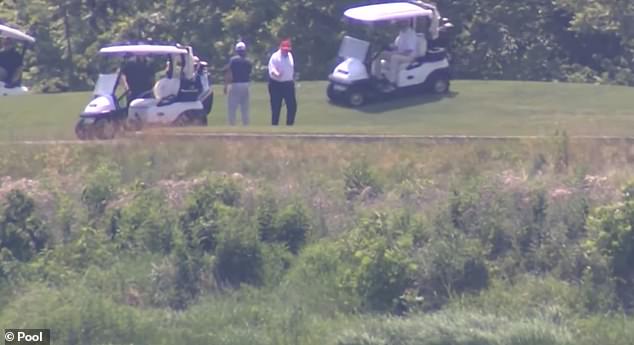 +17
At one point, footage appeared to show Trump (center) giving a 'low five' to a golfing companion without sterilizing his hands
At one point, video footage appeared to show Trump giving one golfing companion a 'low five' without sterilizing his hands.
According to the Virginia Department of Health, social distancing of six feet and is still strongly encouraged as the state begins its final reopening stage.
A social distancing guideline from the health department asked that residents 'avoid handshakes, hugs, and kisses,' as well as 'dirty hands.'
Several states, including Virginia, have seen concerning spikes in coronavirus cases over the last several weeks that have re-shuttered businesses and doubled down on public health rules.
But the president appeared unbothered as he and First Lady Melania arrived to the event without any form of face covering.
The event kicked off with patriotic tunes, flyovers and messages from service members from South Dakota.
Former 'Entertainment Tonight' host Mary Hart, a former Miss South Dakota, served as emcee for the night. 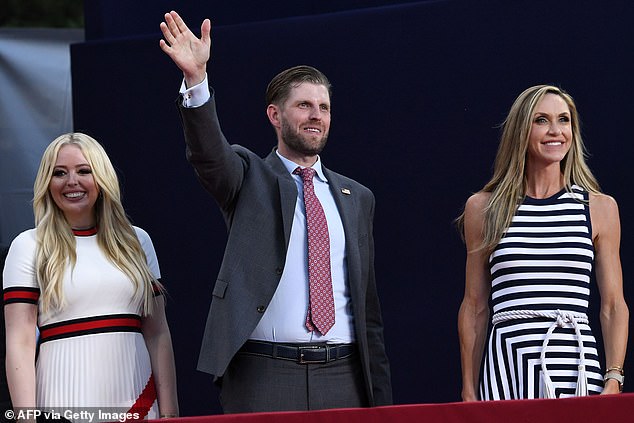 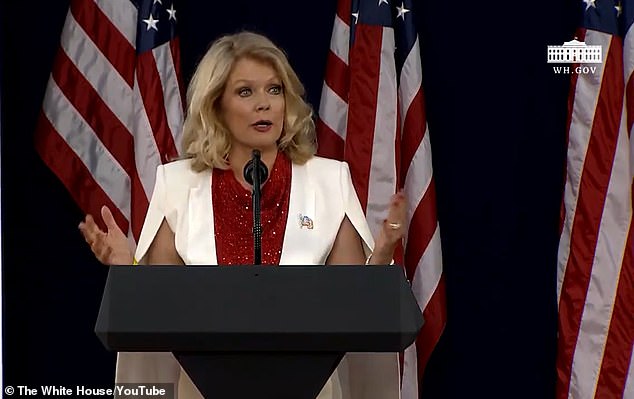 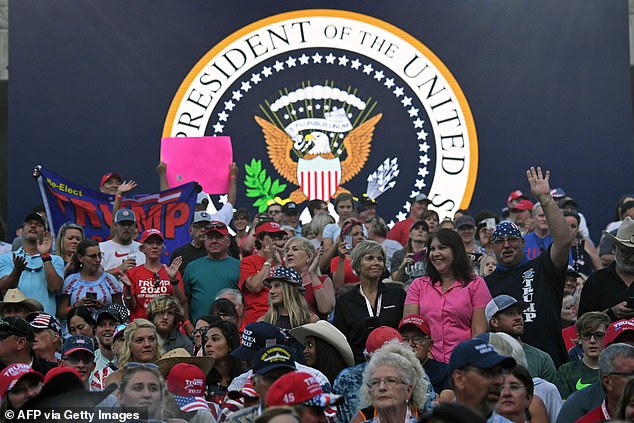 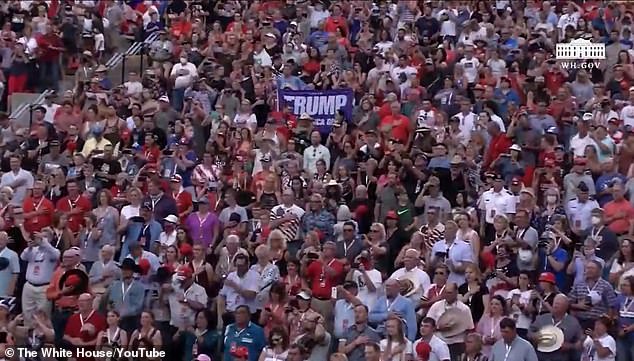 +17
Supporters didn't wear masks to attend Friday night's event with the president and first lady at Mount Rushmore in South Dakota amid the coronavirus outbreak
First daughter Tiffany Trump and boyfriend Michael Boulos traveled to Mount Rushmore with the family.
Former press secretary Sarah Huckabee Sanders and her family were also on hand.
Prior to leaving for the trip, Trump talked about how Mount Rushmore was in 'good shape.'
'We're going to Mount Rushmore. Mount Rushmore is in great shape and it's going to be in great shape for centuries to come,' the president told reporters on the tarmac at Joint Base Andrews before he left. 'I'll be making a speech there. I'll be seeing a lot of people, a lot of different people and I think it will be a fantastic evening.'
Trump's allusion to Mount Rushmore's staying power was a preview of the speech he plans to deliver that will focus on condemning protesters who want to 'tear down' the nation's history.
As the coronavirus crisis has continued to loom, the president has leaned into culture war themes, including the preservation of Confederate monuments, which have come under assault in the aftermath of George Floyd's death and the subsequent 'Black Lives Matter' protests.
The White House has argued that if military bases and statues are renamed and removed, it will be a slippery slope to figures like George Washington, whose bust is on Mount Rushmore, being 'erased.' Washington was a slave-owner, as was Thomas Jefferson, who's also on the South Dakota sculpture. 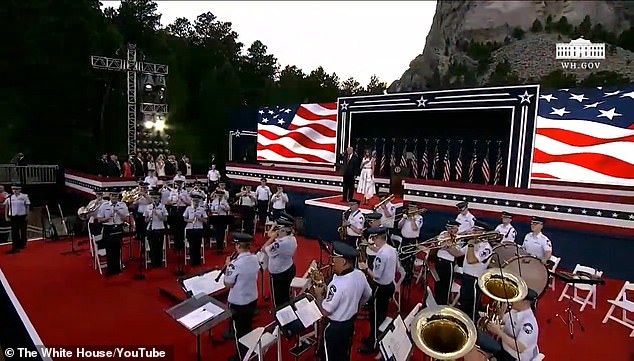 +17
The president and first lady arrive at Mount Rushmore for the Fourth of July festivites, which kicked off with military flyovers, patriotic music and messages from servicemembers from South Dakota 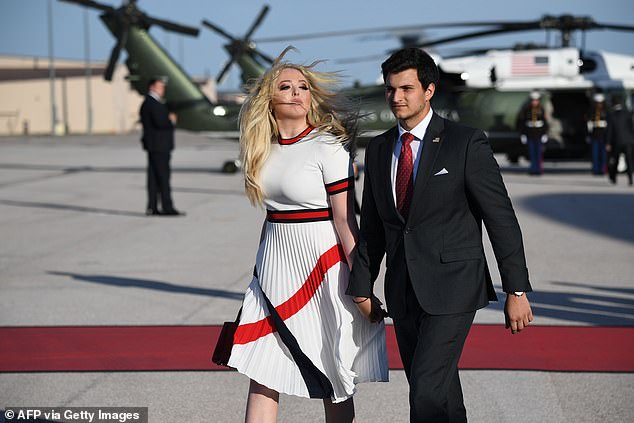 +17
First dauhter Tiffany Trump (left) and her boyfriend Michael Boulos (right) arrive in South Dakota ahead of her father's remarks at Mount Rushmore
On the tarmac, the president also touted the economic recovery, saying the economy is 'doing very well.'
'I think we will have a V-shape,' he added, meaning that the economy will come back as quickly as it fell.
While in his motorcade before departure, Trump tweeted out a number of Congressional endorsements, including for former White House doctor Ronny Jackson, who he originally endorsed in February, and also Rep. Jeff Van Drew, the New Jersey Democrat-turned-Republican who voted against the president's impeachment.
Trump has tried to stick to culture war themes and the economy instead of talking about the rise in coronavirus cases, which topped 50,000 new cases a day earlier this week.
But public health experts have warned that his back-to-back Fourth of July events could only make things worse.
Dr. Anthony Fauci was asked about Trump's trip to South Dakota on Wednesday, and while he didn't criticize it directly, he suggested it wasn't smart to go.
'You should avoid whenever possible gathering in crowds where people cannot maintain physical distance,' Fauci said.
'Avoid crowds, wear a mask, keep physical distance,' the doctor continued during an Instagram Q&A with former CNN White House Correspondent Jessica Yellin. 'It doesn't matter what the reason for the congregation, whether it's a celebration here, the demonstration there. It doesn't make any difference - wear a mask.'
Similarly, D.C. Mayor Muriel Bowser said that she warned the Department of the Interior about having Saturday's Fourth of July event in Washington, D.C.
The president and first lady will present a 'Salute to America' from the White House's South Lawn and the Ellipse. There will be military flyovers and, later, the annual fireworks display.
Bowser said the event was against CDC guidelines and could cause a spike in COVID-19. 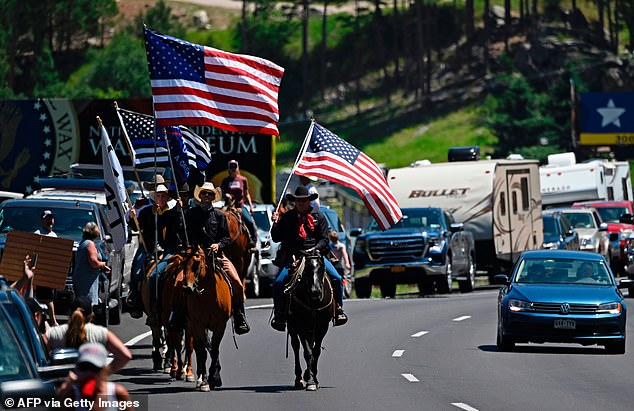 +17
Trump supporters on horseback go through Keystone, South Dakota ahead of his planned appearance Friday night at Mount Rushmore 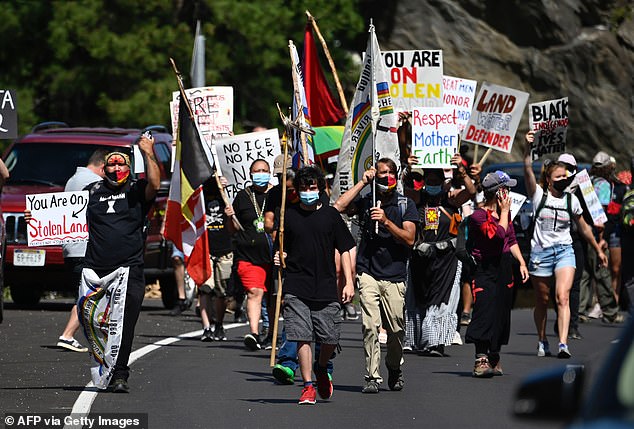 +17
Protesters also gathered ahead of President Trump's visit, including those representing different local tribes
The fireworks at Friday night's event in South Dakota are problematic too because they could cause a fire.
Trump previously blew this warning off saying, 'What can burn? It's stone.'
But one former park official said that the event will 'endanger public safety' and it will be 'extremely difficult' to evacuate crowds in case of an emergency. The crowd will be limited to 7,500 attendees.
The cost of the event has also raised eyebrows.
TMZ obtained documents showing the Friday night fireworks display will cost a little under $600,000.
The display itself cost $350,000, paid to a company called Pyro Spectaculars.
An environmental consulting firmer named Ero Resources Corporation was paid $138,800 to work on the event. Security and screening will cost $33,000. Permitting and inspections will cost $30,000.
The National Fire Protection Association was paid $30,000 for consulting. Finally, $3,500 was spent on portable toilets.
Native Americans protest Trump's arrival at Mt Rushmore