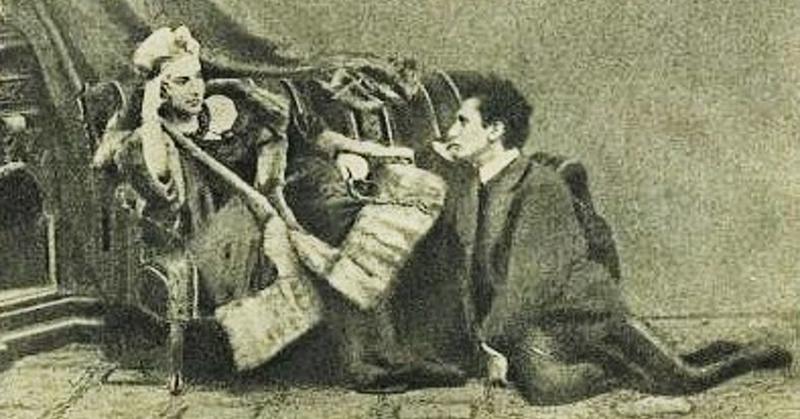 Leopold von Sacher-Masoch and Fanny Pistor Bogdanoff, c. 1870-1880 (note the whip). (Unknown author/Wikimedia Commons)
Human sexuality is a vastly complicated subject. While taboo to talk about in polite society, sex is the reason we're all here today! However, things aren't always so straightforward when it comes to lovemaking, as many people enjoy exploring, shall we say, less traditional means of experiencing pleasure. For example, sadomasochism (A.K.A. S&M, the sexual act of inflicting or receiving pain) is one of the most common fetishes on Earth. You've likely heard of (or maybe even explored) S&M, but have you ever wondered what it means? You might assume it has its roots in Latin or Greek, but the word is actually a portmanteau of the names of two particularly freaky dudes. We owe the word "sadism" to the Marquis de Sade, a violent French nobleman known for his many brutalities and raunchy writings, but the namesake of "masochism," Leopold von Sacher-Masoch, is far less famous. 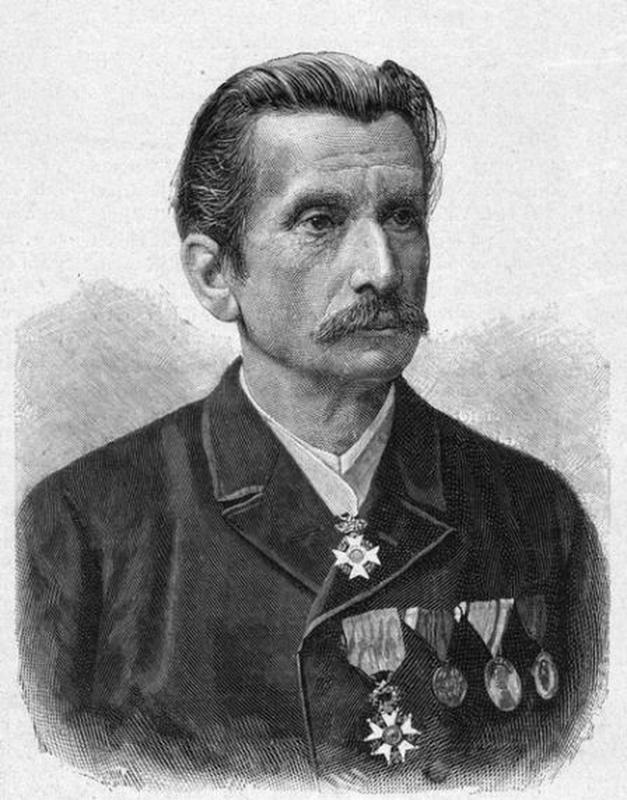 Also a nobleman, Sacher-Masoch was born in the Kingdom of Galicia and Lodomeria (present-day Ukraine) on January 27, 1836 to Leopold Johann Nepomuk Ritter von Sacher and Charlotte von Masoch. The couple were early pioneers of the hyphenation trend: Since Charlotte was the last of her family, they agreed to hyphenate so the Masoch name wouldn't die out. It's a good thing, too—"sadosacherism" is a bit of a mouthful.
Due to political unrest in Eastern Europe at the time, Masoch moved around a lot but wound up at the Austrian University of Gratz, where he studied law. He became a professor after graduation but moonlighted as a writer and social activist. Most of his work had to do with local legends and short stories of the various ethnic groups of his region, specifically the Jewish population. In a time when Jewish stereotypes were rampant in European literature, Sacher-Masoch's work always depicted Jewish life with realism and complexity. 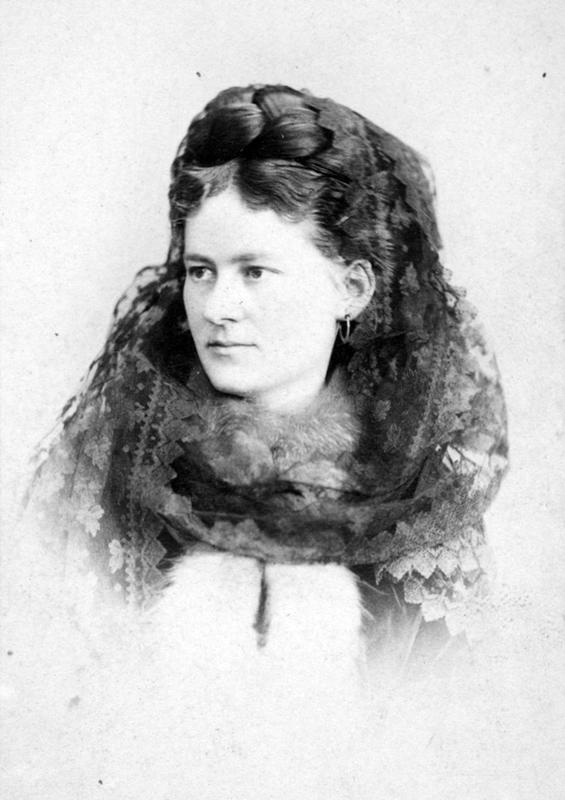 However, his most famous work would be the still widely read Venus In Furs, an 1870 novella about a young man named Severin who becomes so enamored with a woman that he offers to be her slave. This story didn't come out of nowhere. When Sacher-Masoch was 33 years old, a young writer with the unfortunate name of Fanny Pistor reached out to him for writing advice, and much like his Venus In Furs protagonist, he fell head over heels for her. Though he would marry twice, his first wife rebuffed his fantasies, so Pistor proved a welcome playmate.
Venus In Furs describes probably the most famous image related to Sacher-Masoch: a woman wearing a beautiful dress, sparkling jewelry, and a massive fur coat, all while holding a whip. This image was clearly inspired by Pistor, who often dressed in such a manner on their public outings, where they maintained their respective sexual roles. For example, he might sit behind her on the train or even buy a lower-class ticket so they wouldn't be viewed by outsiders as equals.
In 1869, Sacher-Masoch and Pistor made things official, but not with a white gown at a church. Together, they signed a six-month legally binding contract which designated him as her "slave" and she his "master." The contract itself was pretty straightforward, stipulating that she could punish him however she desired, and at the end of the six-month period, everything would go back to normal. It was sort of a "what happens in Vegas" situation. He did ask that she allow him to keep his job and not sneak a peak at any of his correspondence, because after all, just because you're a slave doesn't mean you can't have boundaries. The two never married, and it's unclear if they were ever truly "lovers" in the traditional sense. 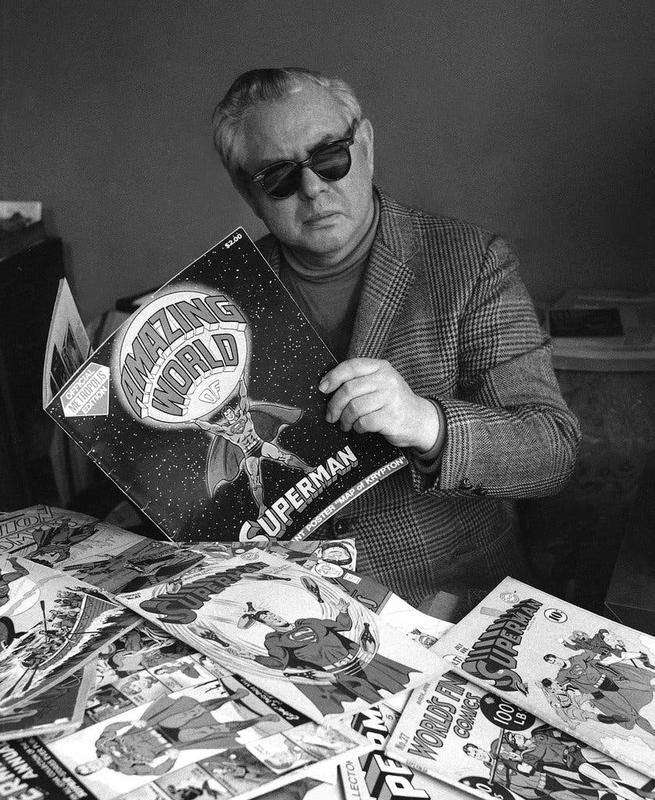 
The Invention Of Masochism

In the era just before Freud, learned men were already getting busy studying human sexual development and how it shapes our lives. One of them was Richard von Krafft-Ebing, an Austro-German psychiatrist famous for his book Sexual Psychopathy: A Clinical-Forensic Study. Unfortunately for Sacher-Masoch, Krafft-Ebing had read Venus In Furs with such great interest that he gave the unusual preference a name: masochism. Sacher-Masoch was understandably appalled that his name was invoked in a book called Sexual Psychopathy and his fantasies were being painted in such a negative light, but despite the long-held belief that sadomasochism is psychologically unhealthy, modern psychologists do not classify S&M as a paraphilia as long as both parties are of age and consenting.
In fact, sadomasochism has edged its way into the mainstream, with major artists like Rihanna dropping the hit song "S&M" in 2011 and The Velvet Underground finding fame and success with their 1964 hit "Venus In Furs." You may be surprised to know just how many famous people have openly participated in sadomasochism, from American actress Angelina Jolie to Joe Shuster, the co-creator of Superman. Shuster even put his artistic talents to work by drawing some extremely lurid comics of both men and women being chained and whipped.
Just why this counterintuitive form of satisfaction is so popular may have to do with the sexiest organ of all: the brain. According to neuroscientists, dopamine (A.K.A. the "pleasure chemical") is normally activated when a person is happy or experiencing something pleasurable, but it is likewise activated to mitigate pain, which is why some people find pain and pleasure to be inextricably linked. Whatever the underlying mechanism, Sacher-Masoch had a profound impact on the world with his novella but perhaps couldn't cope with the disgust toward his inclinations. Like his sadistic counterpart, he sadly died alone in an asylum in the late 1800s.
Posted by free heip at 06:19