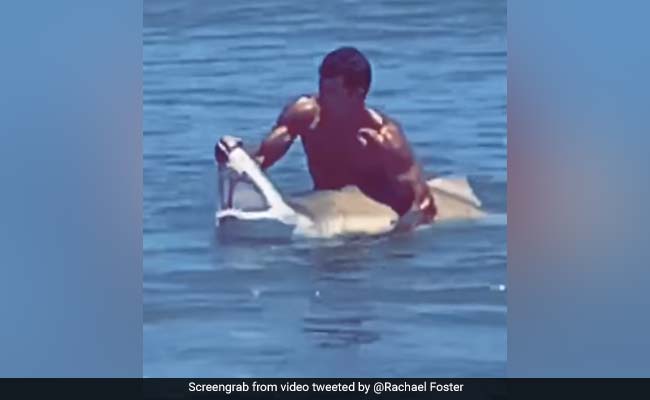 A man was filmed prying open the jaws of a shark on camera.


A swimmer was filmed grabbing a shark and holding its jaws wide open in a video that has elicited shocked as well as impressed comments on social media. The man was filmed posing for photos with the shark in water at USA's Cape Henlopen State Park Beach in Delaware, reports The Mirror.
A video of the incident was shared on Facebook by Delaware resident Rachael Foster, where it has gone viral. Many criticised the man's actions, while others pointed out that catching and releasing a shark is legal in the state. Ms Foster later updated her post to say that the swimmer had not broken any rules by catching the shark and everything he did was totally "by the book".
In the video, people can be heard gasping and screaming as the man took hold of the shark and pried its jaws open for the camera. "That's a big*** shark," a woman can be heard saying in the video.
"For anyone commenting how this guy should have left the shark alone, or that this isn't right you really need to educate yourself," wrote Ms Foster while sharing the clip. "He did this by the book and was totally legal with it," she said, adding that the swimmer later released the shark.
"His buddy simply caught a shark. He went out, opened its mouth to get the hook out, then he went deeper into water turned the shark around and released it!" she wrote.
(Disclaimer: Viewer discretion advised. Video contains language that is not suitable for children.)
Since being posted on Sunday, the video has collected over 60,000 views and a ton of shocked comments.
"That's so crazy," wrote one person in the comments section.
"He caught it with his hands! The fact that shark is even there is crazy!" another said.


According to Fox News, a number of sharks can be found both in the Delaware Bay and the Atlantic Ocean, but specific species cannot be removed from water. Sand tiger and sandbar sharks are prohibited from being kept and must be immediately released to ensure their survival, according to Delaware laws.
Posted by free heip at 05:15