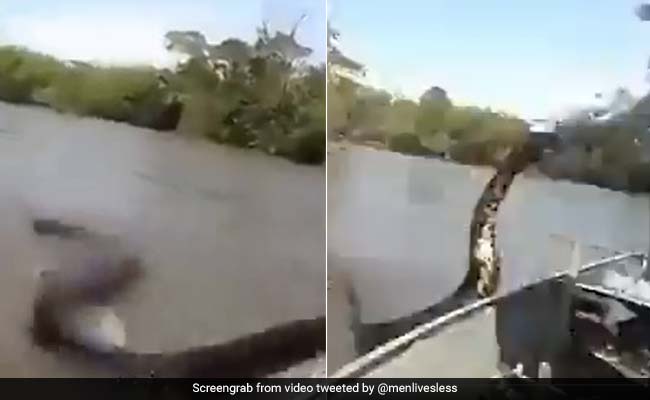 A group was filmed trying to pull a gigantic anaconda out of water in Brazil in 2014.


In a video that may send chills down your spine, a group was filmed trying to pull a gigantic anaconda out of river water. The video, which dates back to 2014, is going viral on social media again after it was posted on Twitter three days ago. According to the Daily Mail, the incident occurred when a group of three people, boating down a river in Brazil, came across the gigantic snake.
The serpent, estimated to be at least 17-feet, was filmed moving down the Santa Maria river in September 2014 when Sirlei Oliveira, husband Betinho Borges and friend Rodrigo Santos caught sight of it. Mr Borges attempted to catch the anaconda by its tail, even as the distressed snake tried to get away from the boat.
"Leave it! Oh my god," Ms Oliveira was filmed yelling in Portuguese while her husband instigated their friend to catch the anaconda too.
He was seen holding the thrashing anaconda by its tail and pulling it several times before the serpent managed to shake the group off and swim away.
Watch the horrifying video below:
Since being shared on Twitter three days ago, the old video has gone viral again, collecting more than 3 lakh views and thousands of horrified reactions.
According to Fox News, environmental police in the state of Mato Grosso do Sul, where the incident occurred, fined the group the equivalent of $600 each.
Anacondas are a group of large snakes found in South America. The snake filmed in this video has been identified as a yellow anaconda - one of the largest snakes in the world and still the smallest cousin of the anaconda family. Yellow anacondas prefer aquatic habitats and kill their prey by constriction.
Posted by free heip at 05:10