In 1898, white supremacists permanently scarred the community of Wilmington, North Carolina by stoking anger and resentment among the white citizens of this formerly affluent black town. After creating the "White Declaration of Independence," the hate group attacked black people in the media, at the polls, and finally, in the streets. Even after they turned Wilmington into a haven for white supremacists, though, the job wasn't done. White scholars and historians covered up the political games played to oust black politicians and blamed the violence on those who suffered from it the most. The real story has only recently come to light.

In 1898, Wilmington, North Carolina had a prosperous majority-black population. Four years earlier, the Republican Party and the burgeoning Populist movement came together to form the aptly named "Fusion Party," and this new racially diverse party defeated establishment politicians (many of them white supremacists, who comprised the Democratic Party at the time) across the board in the next two state and local elections. They weren't happy about it. 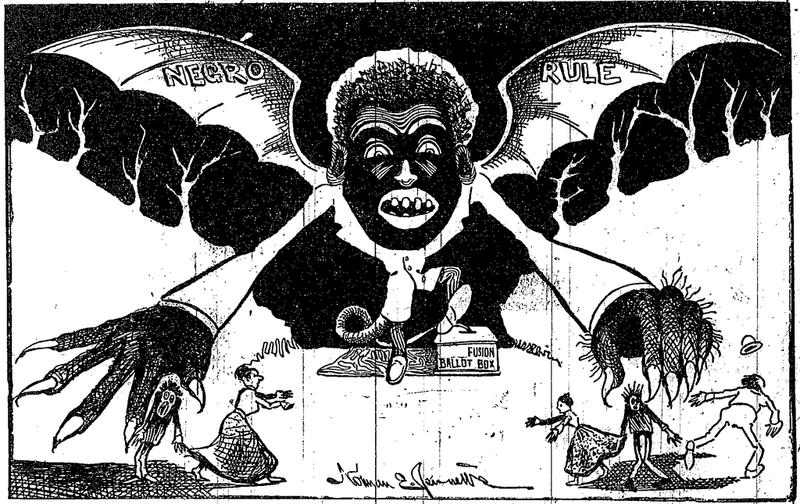 In response to the crushing defeat, Democratic Party leaders like Furnifold Simmons, Charles Aycock, and Alfred Moore Waddell put their heads together and hatched a plan to lure populist voters away from the Fusion Party and towards the Democrats. The Democratic Handbook of 1898 laid out the group's plan to regain the white vote by "stoking white anger and resentment," which is essentially what white supremacists have been doing ever since. To that end, they used the local paper The News and Observer to run a wide series of political cartoons that depicted black men as monsters who only existed to attack white women and take people's jobs and warned readers of the threat of "negro rule," even though most Fusion leaders were white.

The cartoons and articles printed in the The News and Observer did exactly what they were intended to do. Fear of their black neighbors exploded among uninformed white Wilimingtonians, but it was an incident across state lines that brought everything to a head.
Prominent Georgia writer Rebecca Felton gave a speech calling for the lynching of black men who slept with white women, and it went as viral as it could in the 19th century. Alexander Manly, scion of Wilmington's The Daily Record, responded to Felton in the October 20, 1898 edition of his paper, insisting that many white women who slept with black men did so because they found them attractive, not because they're "brutish" or because the men are kidnapping women, as white supremacists wanted people to think.
Manly's editorial backfired. His words were reprinted in Democratic newspapers who labeled it "horrid slander," angering white voters across North Carolina.


The White Declaration Of Independence

The mood of the 1898 election in Wilmington was decidedly different from those in recent years. Anyone trying to vote on November 8 had to go through the "Red Shirts," a paramilitary group of local white men who intimidated Fusion or Republican voters. The white supremacist group barred people of color from voting while holding rallies where they called for the deaths of black men.
Predictably, every seat that was up for reelection was taken by a Democrat, but even this victory didn't satisfy the party. The black officials whose seats weren't up for reelection held onto them, and black business owners were still prosperous across the state. Having failed to secure total white supremacy for North Carolina, white Democrats released what they referred to as the "White Declaration of Independence" the day after the election. The proclamation called to strip black men of voting rights and give their jobs to white men, and it personally singled out Alexander Manly, warning that his time in North Carolina was at an end. 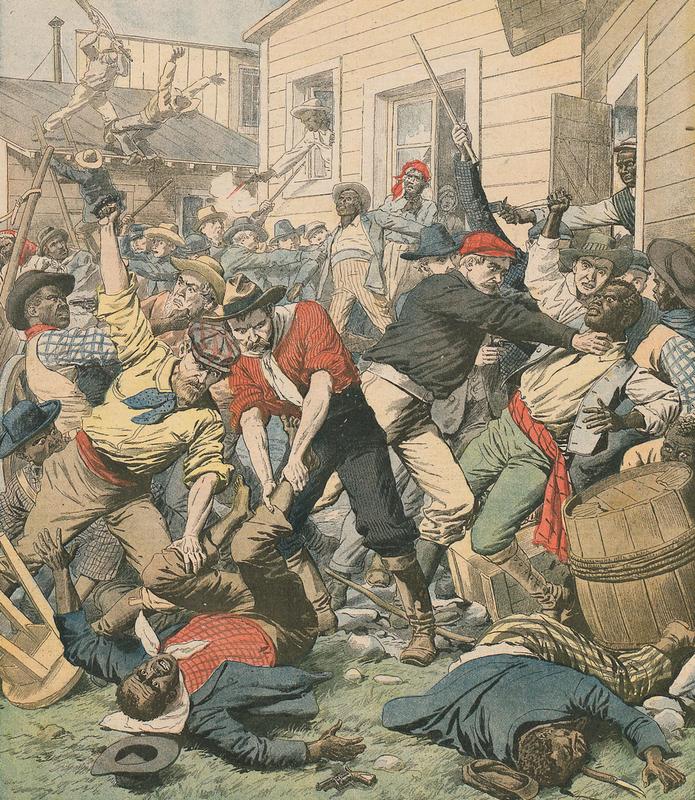 
The Wilmington Massacre Of 1898

The next day, The Daily Record's building was burned down, and Manly fled the state for Washington D.C. before moving to Alabama. The destruction of The Daily Record meant black Wilmingtonians had no way to get information that wasn't refracted through a racist lens, but it was just the beginning of their hardships.
The mayor and board of alderman were confronted by 200 armed men and forced out of their positions, which were taken over by Democratic leaders, paving the way for an all-out slaughter. Violence spilled into the streets of Wilmington as the armed white men attacked black people and destroyed their business and property, and smaller patrols terrorized the city, killing at least 60 black residents. When the day was done, Alfred M. Waddell paraded any white Republicans he could find through the city before forcing them to leave by train, while the city's black residents fled to the swamps or left the state entirely.

Following what has become known as the Wilmington Massacre of 1898, the media failed black Wilmingtonians, reporting that it was they who perpetrated violence and the mobs of white supremacists were simply doing what they had to do to keep the city safe. This version of the story is what went into the state's history books, erasing the horrors that black Wilmingtonians faced that day for the next century. It was 90 years before North Carolina elected a black Congress member, with Eva Clayton winning the vote in 1992.

The White Declaration of Independence 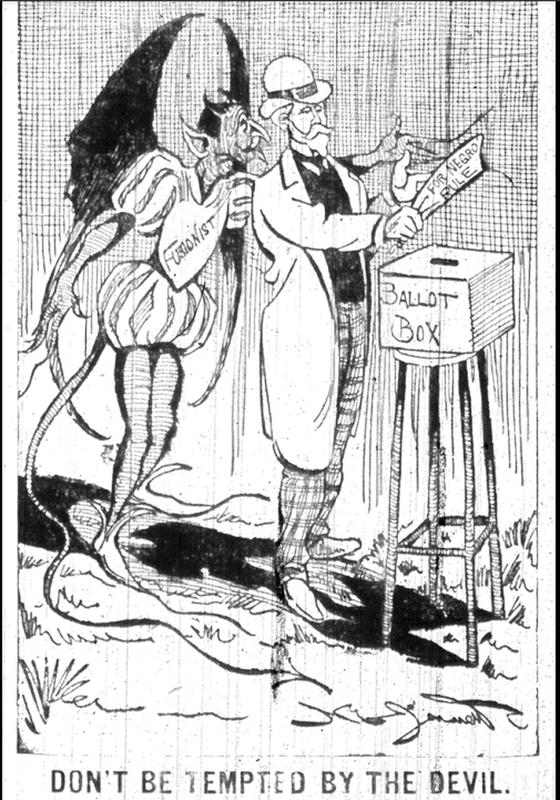 (The News and Observer/Wikimedia Commons)

Here's the full text of the White Declaration of Independence, written prior to the massacre and coup d'état of Wilmington, North Carolina:

Believing that the Constitution of the United States contemplated a government to be carried on by an enlightened people; believing that its framers did not anticipate the enfranchisement of an ignorant population of African origin, and believing that those men of the state of North Carolina, who joined in framing the union did not contemplate for their descendants subjection to an inferior race.We the undersigned citizens of the city of Wilmington and county of New Hanover, do hereby declare that we will no longer be ruled and will never again be ruled, by men of African origin.This condition we have in part endured because we felt that the consequences of the war of secession were such as to deprive us of the fair consideration of many of our countrymen.While we recognize the authority of the United States and will yield to it if exerted, we would not for a moment believe that it is the purpose of 60 million of our own race to subject us permanently to a fate to which no Anglo-Saxon has ever been forced to submit.We, therefore, believing that we represent unequivocally the sentiments of the white people of this county and city, hereby for ourselves, and as representatives of them, proclaim:That the time has come for the intelligent citizens of this community owning 95 percent of the property and paying taxes in proportion, to end the rule by Negroes.That we will not tolerate the action of unscrupulous white men in affiliating with the Negroes so that by means of their vote they can dominate the intelligent and thrifty element in the community, thus causing business to stagnate and progress to be out of the question.That the Negro has demonstrated by antagonizing our interests in every way, and especially by his ballot, that he is incapable of realizing that his interests are and should be identical with those of the community.That the progressive element in any community is the white population and that the giving of nearly all the employment to Negro laborers has been against the best interests of this county and city, and is sufficient reason why the city of Wilmington, with its natural advantages, has not become a city of at least 50,000 inhabitants.That we propose in the future to give to white men a large part of the employment heretofore given to Negroes because we realize that white families cannot thrive here unless there are more opportunities for employment of the different members of their families.That we white men expect to live in this community peaceably; to have and provide absolute protection for our families, who shall be safe from insult or injury from all persons, whomsoever. We are prepared to treat the Negroes with justice in all matters which do not involve sacrifice of the intelligent and progressive portion of the community. But are equally prepared now and immediately to enforce what we know to be our rights.That we have been, in our desire for harmony and peace, blinded both to our interests and our rights. A climax was reached when the Negro paper of this city published an article so vile and slanderous that it would in most communities have resulted in a lynching, and yet there is no punishment, provided by the courts, adequate for the offense. We, therefore, owe it to the people of this community and city, as protection against such license in the future, that "The Record" cease to be published and that its editor be banished from this community.We demand that he leave the city forever within 24 hours after the issuance of this Proclamation. Second, that the printing press from which "The Record" has been issued be shipped from the city without delay; that we be notified within 12 hours of the acceptance or rejection of this demand.If the demand is agreed to, we counsel forbearance on the part of the white men. If the demand is refused or no answer is given within the time mentioned, then the editor, Manly, will be expelled by force.