'Whoever finds this will remember Hitler's war against humanity': Message in a bottle left by Nazi slave workers is discovered hidden behind a wall in Polish railway station

A chilling letter written by Nazi slave workers has been found hidden inside a bottle during renovation work at an old railway station in Poland.
The scrawled 'message in a bottle' was uncovered behind a wall by builders in the small town of Nowe Skalmierzyce.
During World War Two, the town in central-western Poland, was encompassed into Hitler's Third Reich. 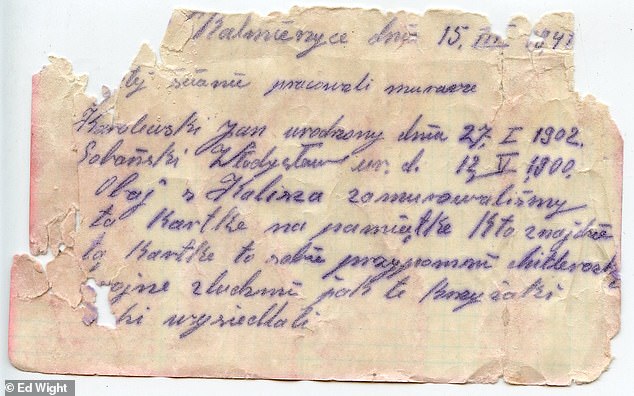 +4
The scrawled 'message in a bottle', dated 1941, was uncovered behind a wall by builders in the small town of Nowe Skalmierzyce, central-western Poland
Dated 1941, the letter written by two Polish men called Jan Karalewski, 39, and Wladyslaw Sobanski, 41, says: 'The two of us, both from Kalisz, have walled up this sheet of paper as a reminder.
'Whoever finds this piece of paper will remember Hitler's war against humanity, like when the Teutons expelled people.'
Teutons was a reference to the Teutonic Knights and used as slang during WWII to refer to German soldiers.
Following Nazi Germany's invasion of Poland in 1939, the use of slave labour took on an unprecedented scale.
Around 12 million people from 20 European countries, two thirds of whom came from Central and Eastern Europe, were forced into horrific work conditions, with many dying from extreme mistreatment, severe malnutrition, and torture.
In the town of Nowe Skalmierzyce where the letter was found, a Polish labour camp was set up along with a Nazi transit camp where half of the town's population and surrounding areas were sent.
Most were shipped off to Dachau death camp in Germany. The rest did not survive.
The mayor of Nowe Skalmierzyce, Jerzy Lukasz Walczak, posted a photo of the letter on social media, saying: 'Letters in bottles don't only float in the seas.
'And they don't only appear in movies or in the pages of books ... Life also sometimes writes incredible stories. 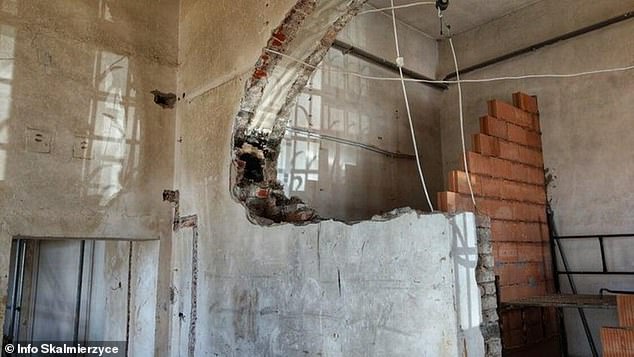 +4
The wall where the letter from two Polish men called Jan Karalewski, 39, and Wladyslaw Sobanski, 41, was found in an old railway station in Nowe Skalmierzyce, Poland 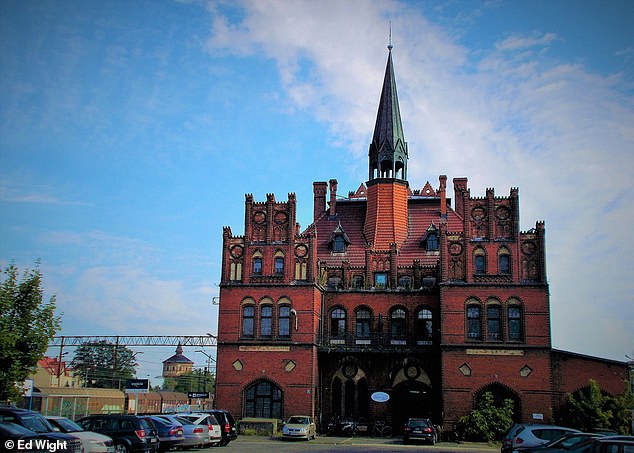 +4
The train station, Nowe Skalmierzyce, where the letter was discovered by builders 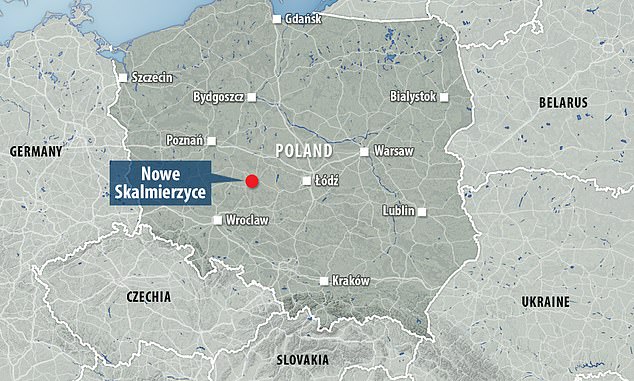 +4
Following Nazi Germany's invasion of Poland in 1939, the use of slave labour took on an unprecedented scale. The men were working on the train station in Nowe Skalmierzyce
'79 years ago, a small note in a bottle was laid, which was discovered yesterday by employees who were renovating the waiting room at our station.
'The object was walled up, so the glass was damaged when being removed, but the message can still be read.'
The letter identified the men as Jan Karalewski, born 27 January 1902, and Wladyslaw Sobanski, born 13 May 1900.
City officials have now launched a hunt for the men's families.
Posted by free heip at 05:12