A Treasure Trove Of Nazi Artifacts Recently Discovered In Argentina

Some of the 75 pieces of Nazi art seized during an operation carried out on the outskirts of Buenos Aires. Numerous sculptures and crafted objects including an eagle of the Third Reich were found in two shops and a home in the north of the capital, the se
World War II ended in 1945, but the Nazi story didn't end there. With the German defeat inevitable, many top-ranking Nazi officials fled Europe and hid in the relative obscurity of South America, taking with them the items that were important to them. In 2017, acting on a tip, authorities in Argentina discovered a hidden room in a house that was full of Nazi artifacts. This treasure trove offers us priceless insight into the distorted and cultish world of Hitler's Nazis.

With the Allied Forces closing in on them, many Nazis escaped to South America via a "ratline" system, traveling to Spain and then on to Argentina. Many people remained in Argentina, in and around the capital city of Buenos Aires, but others scattered to Peru, Brazil, Paraguay, Colombia, Bolivia, and Uruguay. Conspiracy theorists contend that Adolf Hitler may have also escaped to South America, but most historians believe the story that Hitler and his brand-new bride committed suicide in a bunker as the Third Reich fell. Nazi hunters routinely tracked down notorious Nazis living new lives in South America. 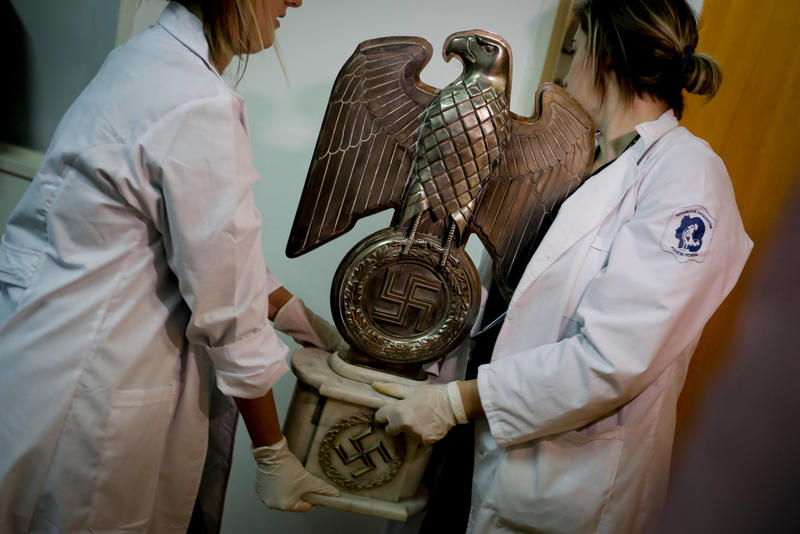 More than 75 items were found in a secret room. (nytimes)

On June 8, 2017, Argentine police and Interpol raided a residential home in Beccar, a quiet, upscale suburb of Buenos Aires. As the tipster advised, the authorities inspected a bookshelf in one of the rooms, and just like in the movies, it swung open to reveal a secret passageway that led to a hidden room. Inside was a cache of authentic Nazi artifacts, perhaps brought to Argentina by a fleeing Nazi following the ratlines. Among the more than 75 relics found were a magnifying glass, a knife, a bust of Hitler, and a medallion stamped with the Führer's likeness. The authorities even found photographs of Hitler with some of the items, most likely as a means to authenticate them. Most bizarre of all, however, was a cranial measuring device with a swastika-emblazoned handle. 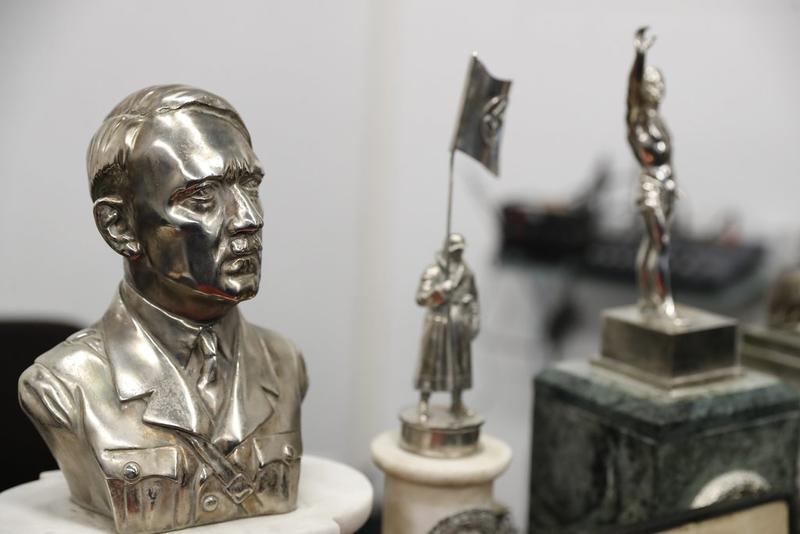 The largest stash of Nazi artifacts found in Argentina was discovered in 2017. (nytimes.com)


The Nazis And Phrenology

Phrenology, the pseudoscience of assessing personality by measuring the size and shape of a person's skull, is now known to be hogwash, but it was once considered as valid as any other -ology. As a group malevolently interested in the biological bases of superiority, you better believe the Nazis had some phrenologists on their roster, who used tools like the cranial measuring device that was found in Argentina to detect traits like intelligence and criminality among their own people as well as the "inferiors" they executed.
There's no way of knowing who the original owner of the cranial measuring tool was or how the item got to Argentina, but it's possible that it was the Angel of Death himself, Dr. Joseph Mengele. A Nazi doctor and loyal Hitler supporter, Mengele personally selected Jewish prisoners for cruel and horrific medical experiments and coldly sent the rest to the gas chamber. After the war, he escaped to South America, where he worked as a farmhand for a number of years. In 1958, he was granted citizenship in Paraguay under his real name. Records show that he lived in Paraguay, Brazil, and Argentina. 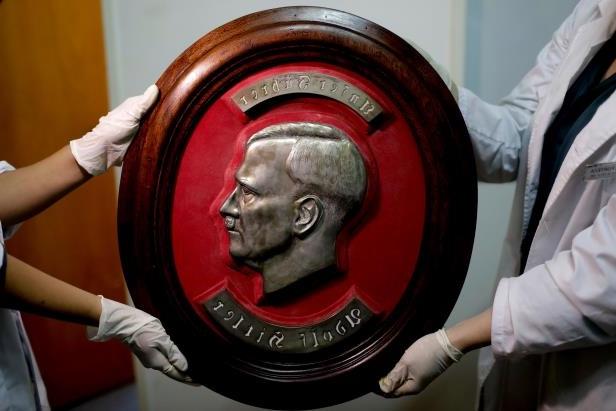 Would someone pack this when they were escaping Nazi Germany? (pressfrom.info)

Although numerous Nazi relics have surfaced in Argentina and other parts of South America, many historians question the assumption that escaping Nazis carried these items with them. Most Nazis fleeing Europe had to travel incognito and took steps to deflect attention, often carrying only the clothes on their backs and a small satchel of personal items. It would defeat the purpose for these fugitives to waste precious luggage space with the tools of their former trade, Hitler memorabilia, or swastika-decorated items that would give them away immediately. It's more likely, if these items were brought to South America by Nazis, that they would have been shipped to them after they fled Germany. 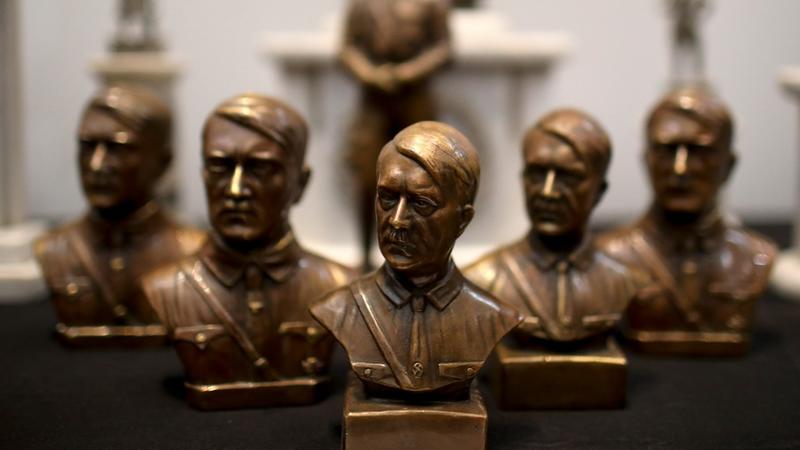 Were Nazis so far under Hitler's spell that they carried his swag with them? (9news.com)


The Cult Of Hitler

Why would these escapees take the risk of surrounding themselves with Hitler memorabilia at all? Well, they believed that once they were safe in South America, they could regroup and relaunch their plan for global Aryan domination from their new homeland. In that case, former Nazi officials might have wanted mementos of their leader as inspiration and motivation for their twisted mission. It's a real testament to the cult-like influence that Hitler had over his followers. 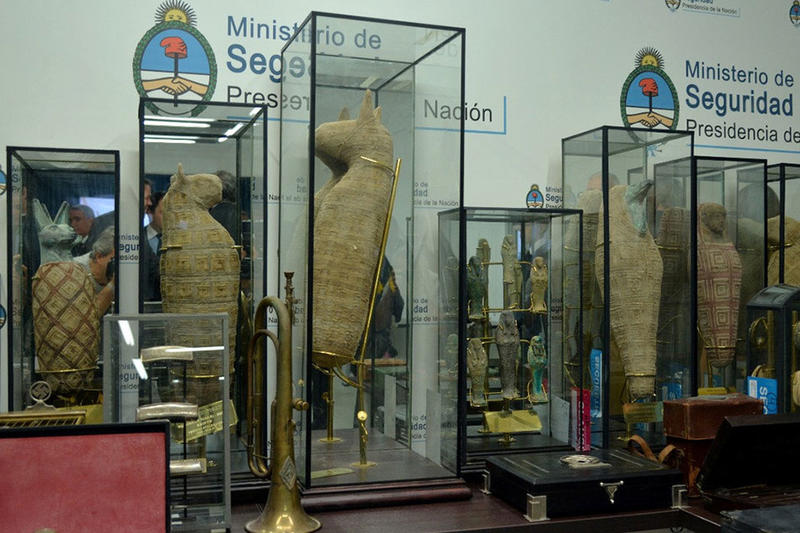 The artifacts are now on display in Buenos Aires. (news.abs.cbn.com)


Where Are They Now?

After the 2017 raid on the house in Buenos Aires, the Hitler artifacts were seized by Argentine police. They are now on display in Buenos Aires at the Delegation of Argentine Israeli Associations, but what's more troubling is the indication of an unsettling underground trade in Hitler relics that is presumably still operational. There's not really anything to be done about it because it's not illegal to own Nazi memorabilia in most countries (a big exception is Germany itself, where the rules are kind of complicated), but it's not illegal to chug ketchup straight out of the bottle, either. It's still pretty gross.
Posted by free heip at 06:08