The Mariana Trench: Mysteries, The Monster, And The New Sound We Found 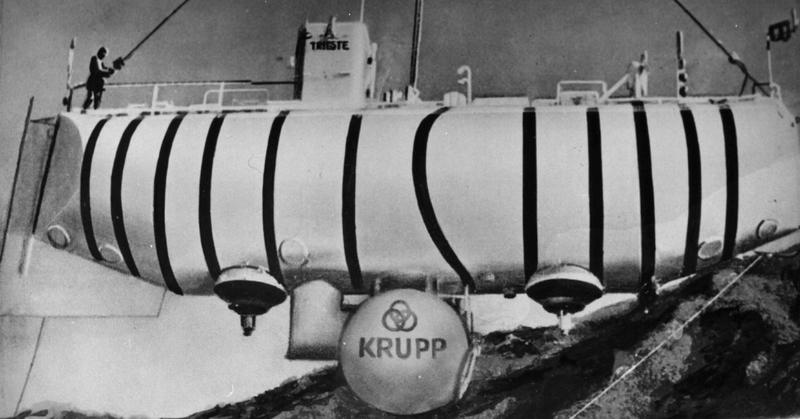 Jacques Piccard in Trieste, the bathyscaphe designed by his father Auguste Piccard. Jaques and Lt. Don Walsh reached a record depth of 11521 metres in the Mariana Trench on 23rd January 1960. Photo shows the bathyscaphe at the Krupp factory in Essen. (Get
Scientists are fond of telling us we know more about the surface of the Moon than we do about the depths of our own planet's oceans. This is particularly true of the Mariana Trench, the deepest trench on Earth. Located in the Pacific Ocean to the east of the Philippines, the Mariana Trench is a place of mystery, with fantastical creatures, sea monsters, and most recently, a bizarre noise. 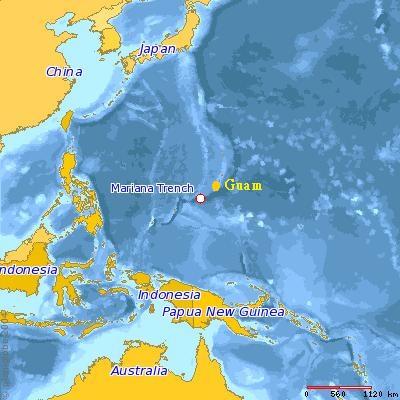 The Mariana Trench is more than 1,500 miles long. (Planiglobe/Wikimedia Commons)


The Deepest Place On Earth

The Mariana Trench stretches more than 1,500 miles and is, on average, more than 40 miles wide, but its most impressive property is its depth. The deepest point of the Mariana Trench, a spot called Challenger Deep, is almost seven miles below the surface. To put that into perspective, if you could pick up Mount Everest, the tallest mountain in the world, and plunk it into the Mariana Trench, you would have to climb to the top of the mountain and then swim another mile straight up to reach the surface. 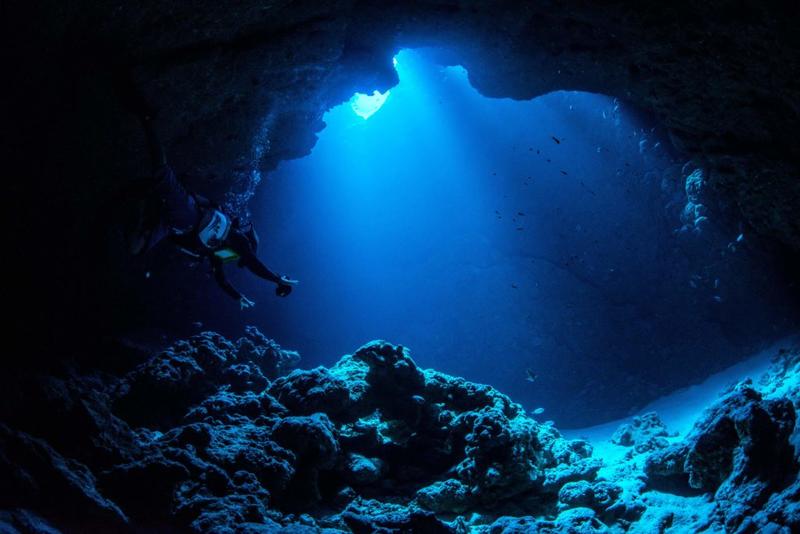 The Mariana Trench is cold and dark. (1840489pavan nd/Wikimedia Commons)

The Mariana Trench is probably not the best destination for your next family vacation. The extreme depth of the trench means that sunlight cannot penetrate to the bottom of it, leaving it in a state of perpetual darkness. As a result, it's also very cold, with temperatures hovering just above freezing. But the biggest issue is the water pressure, which increases as one descends to about eight tons per square inch at the bottom. That's nearly 1,000 times the pressure at the surface. 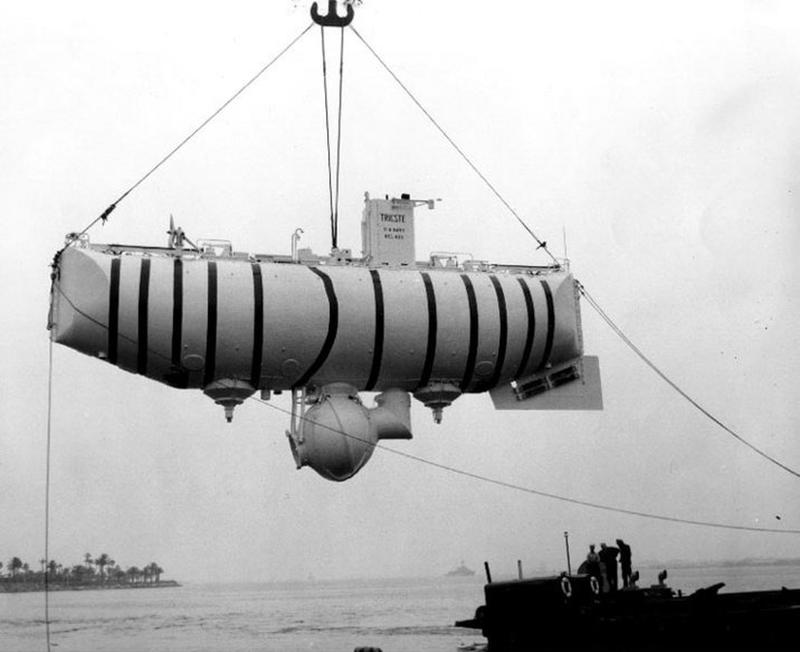 Bathyscaphe Trieste, a Italian-built deep-diving research submersible vehicle, which with its crew of two reached a record maximum depth of about 10,911 metres (35,797 ft), in the first descent of the deepest known part of the Earth's oceans, the Challeng

Explorers began to probe the Mariana Trench in the late 1800s using rudimentary equipment, but it was impossible to get the full picture of the trench without sending someone down. That's only happened once in history: In 1960, a researcher named Jacques Piccard and U.S. Navy lieutenant Don Walsh took a Navy submarine into the depths. Due to the pressure, they couldn't stay long, but when they turned on the submarine's flood lights, they were shocked to see fish. Until then, it was thought that no creature could live in such a harsh environment.

The gulper eel is all mouth and no body. (Claf Hong/Flickr)

Subsequent unmanned probes of the Mariana Trench have captured photographic evidence of the abundance of life in the trench. Naturally, the organisms that call the Mariana Trench home have adapted to suit their unusually brutal environment. The gulper eel, for example, looks like a giant mouth with a tail. Its lack of a true body reduces damage from the pressure of the depths. The yeti crab, which looks like it's covered in soft blond hair, can be found living in the super-heated hydrothermal vents. The hatchetfish has bioluminescent abilities, lighting up its body like a firefly. 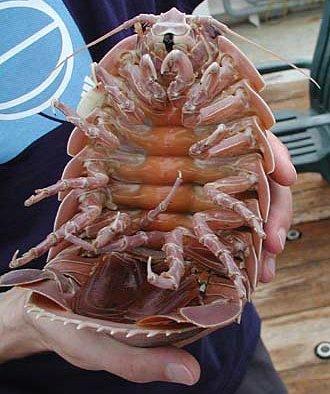 
Giants Of The Deep

One of the oddest things about the creatures of the Mariana Trench is that many of them have evolved to unusual sizes, a sort of deep-sea gigantism. Challenger Deep, for example, is home to plenty of single-celled microbes, but while single-celled life at the surface of the ocean is so small that scientists need microscopes to observe it, the microbes of Challenger Deep are several inches long. Another creature, the giant isopod, look like your average pill bug, except they can grow to be about 12 inches long. 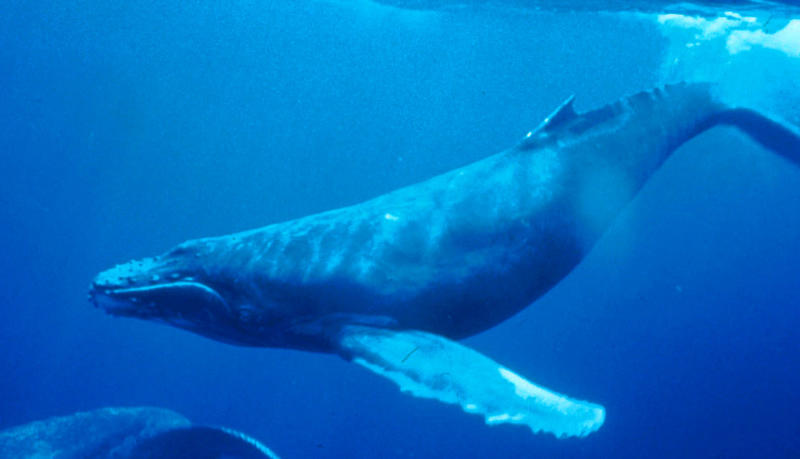 A bizarre sound heard at the bottom of the Mariana Trench turned out to be a new species of whale. (U.S. National Oceanic and Atmospheric Administration/Wikimedia Commons)

In 2016, marine biologists studying the Mariana Trench heard a strange, anomalous sound of unknown origin and started recording. Although the recording is only a few seconds long, experts detected a slightly metallic quality to it, and many speculated that the noise was not natural. After months of analysis, however, the scientists believed they found the source of the noise. It's currently theorized that the sound, which Marine biologists call a "biotwang," is the low-frequency call of a new type of baleen whale. 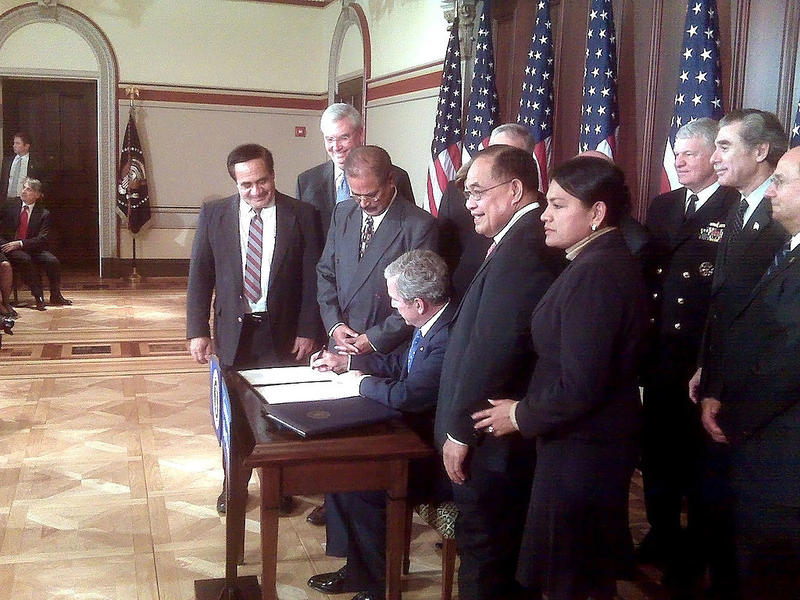 Although it lies far outside the country, the U.S. serves as the protector of the Mariana Trench. In 2009, President George W. Bush created the Mariana Trench Marine National Monument, prohibiting mining and fishing in the trench and requiring special permission for scientific exploration. Whether that's to protect the trench from us or us from whatever deep-sea monsters might be lurking in the trench is open to interpretation.
Posted by free heip at 06:03