A German shepherd in Texas has developed it's own bizarre way of entering rooms through open doorways.

In the clip, Jackson approaches an open doorway and peeks inside to check who is in the room. 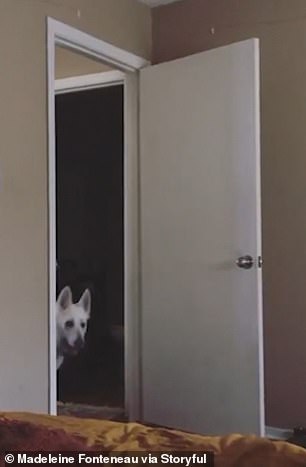 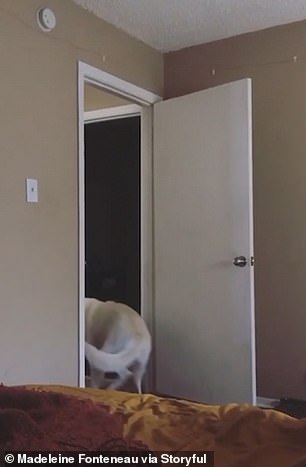 Eight-year-old Jackson wanders up to a doorway and peeks inside to see who is in the room before spinning around on the spot to face away from the open door at his home in Austin, Texas

He then spins around on the spot so that he is facing away from the open doorway.

Jackson then walks backwards into the room, with his tail wagging, before bumping into the bed where Madeleine is filming from.

He then turns round again and launches himself up onto the bed.

The video was recorded on August 27 and Madeleine said that while Jackson's trick was entertaining, he doesn't do it through every doorway.

Madeleine adopted Jackson from an ex-boyfriend where he had been spending a lot of time in a dark apartment with a bad hip. 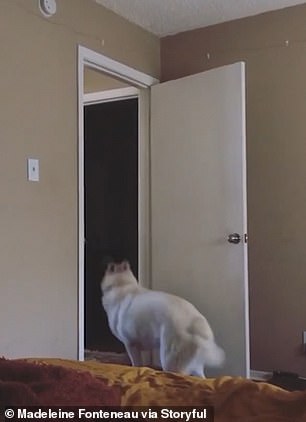 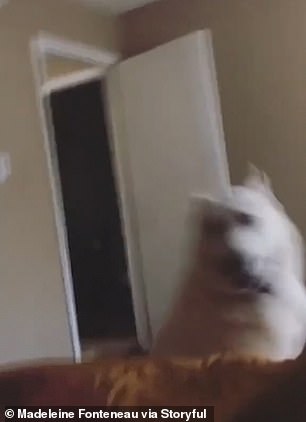 Jackson then walks backwards into the room before bumping into the bed. He turns back round and launches himself onto the bed where owner Madeleine Fonteneau is sat

Now though, Madeleine said: 'Just a few months later, he's really come out of his shell!

'We go hiking all the time, and we're currently on our first road trip! It's been great getting to see his personality shine.'

Jackson has other unique habits as well, including burying his head among blankets, fitting Madeleine's other dog's head in his mouth and being afraid of getting into cars.

But Madeleine said: 'He's an incredible boy, and I feel really lucky to spend my life with this handsome weirdo!'