Pensioner, 84, is forced to lie on a pavement for FIVE HOURS waiting for an ambulance after suffering a fall

A pensioner was forced to lie on a pavement for five hours waiting for an ambulance after taking a fall while cutting hedges.

Donavon Marsh, 84, spent hours on the ground with a blanket covering him after suffering a fall in Waunarlwydd, Swansea at around 4pm on Tuesday.

His son Dave Marsh, 58, was alerted to the incident after his father was found by passersby who called an ambulance.

Mr Marsh said he couldn't fault the service paramedics gave his father once they arrived at 9pm, but that the wait made him anxious about the pensioner's state. 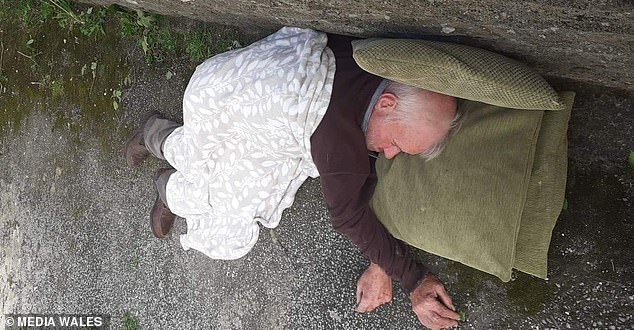 Donavon Marsh, 84, spent hours on the ground with a blanket covering him after suffering a fall in Waunarlwydd, Swansea at around 4pm on Tuesday

He said: 'We were told not to move him and to not give him food or water and were told to tell them if he deteriorated. We rang four times in the five hours, he was in an uncomfortable position on his side and was getting cold as time went on.

'I was worried because at his age, a fall could turn into something more serious and he's the type of person who would usually get up after a fall.

'Luckily, on Tuesday it was fairly mild and dry. If it was Wednesday night, it would have been even worse with all that rain.

'But even though it was mild, he was getting colder and colder and ended up with four blankets on him by the end.'

Mr Marsh said he couldn't complain about the paramedics, who he said were 'very professional' when they arrived to transport him 6.6 miles to Morriston Hospital.

'They did come in the end and they were very professional. When you call up you are asked questions and they obviously have to prioritise serious cases,' he said.

'They took him to Morriston Hospital to the old persons assessment suite and kept him there overnight.

'They rang me yesterday and moved him to the main hospital since he has a urinary tract infection so he'll probably be in there for a couple of days and he's on antibiotics. 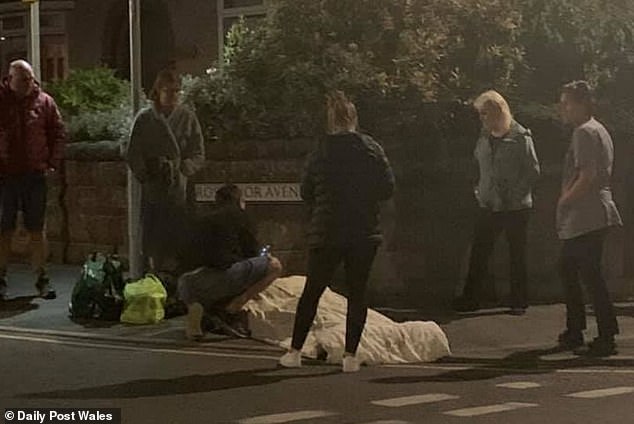 'I can see why it takes a long time, when they came they had to do an assessment and paperwork before leaving for hospital. And at the end of the day it's about resources and the size of our population - the NHS can't cope.'

The Welsh Ambulance Service has said demand on its services has risen to pre-coronavirus levels, and it had its busiest day of the year last month.

The incident comes days after an 80-year-old man collapsed on a pavement in Rhyl and had to wait two and a half hours for an ambulance to arrive.

The pensioner had been out shopping for his wife at Morrisons when passers-by spotted him lying in the road on the corner of Grosvenor Avenue and Trellewelyn Road at around 9pm.

An ambulance was called as residents came out to help and managed to move the elderly gentleman onto the pavement, making him as comfortable as possible with a blanket and pillow.

Speaking about the increased pressure on ambulances, Lee Brooks, the Welsh Ambulance Service Trust's director of operations, said: 'Contrary to popular belief, demand on our ambulance service actually fell during the Covid-19 pandemic, but it's fair to say that normal business has resumed with regards demand.

'Through all of this, our crews show up and deliver the best possible care for those who need us, often in full PPE.'

He reminded people that for many illnesses there were alternatives to 999, so that more ambulances could be free for people who really needed one as soon as possible.

Mr Brooks added: 'If you're ill and unsure what to do, please visit 111.wales.nhs.uk for advice and information or to take a symptom checker quiz.

'Alternatively, visit a pharmacy, your GP or a Minor Injury Unit.

'Keep yourselves and others safe so that emergency ambulances are available for those who need them most.

'We also continue to live with the presence of Covid-19 and so we need to continue to follow the guidance from Public Health Wales and Welsh Government.'