A dream wedding in Gibraltar was almost ruined after a macaque monkey started rifling through the husband-to-be's backpack and stealing his passport.

Lee Ann and her fiancé Gabriel had travelled to the British overseas territory to tie the knot in the Botanical Gardens on August 22.

Before their ceremony, both families decided to take a trip to the Upper Rock, where the thieving monkey struck.

Lee Ann and her fiancé Gabriel (pictured) had travelled to Gibraltar to get married on August 22. They took a trip to the Upper Rock prior to their ceremony, where a macaque monkey too a particular interest in Gabriel's backpack

Video footage of the 'theft' shows the macaque monkey standing on top of Gabriel's shoulder and unzipping his backpack.

The monkey then takes out a packet of sweets and puts them in its mouth.

The real horror came when the macaque then pulls out Gabriel's birth certificate, which also contained his passport - the loss of which could have derailed his marriage.

Luckily, Gabriel is seen placing his foot onto his birth certificate to stop the monkey or any of its accomplices making off with his important documents.

Speaking after the 'mugging', Lee Ann's mother Dr Fui Mee Quek said that Gabriel had not been the first victim of the monkeys and that Lee Ann's sister had also been targeted. 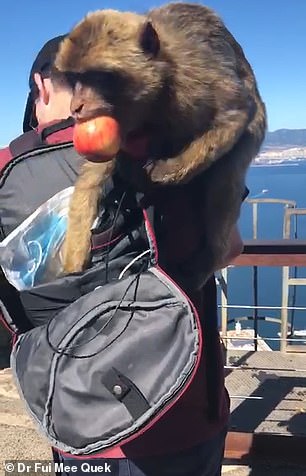 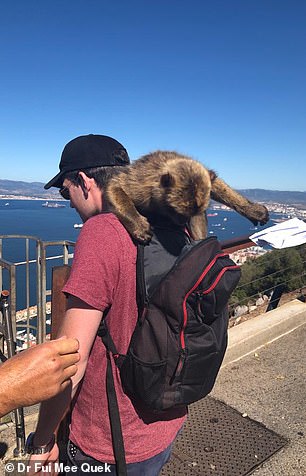 The macaque stands on gabriel's shoulder and rifles through his backpack, throwing its contents onto the ground, including Gabriel's passport and birth certificate 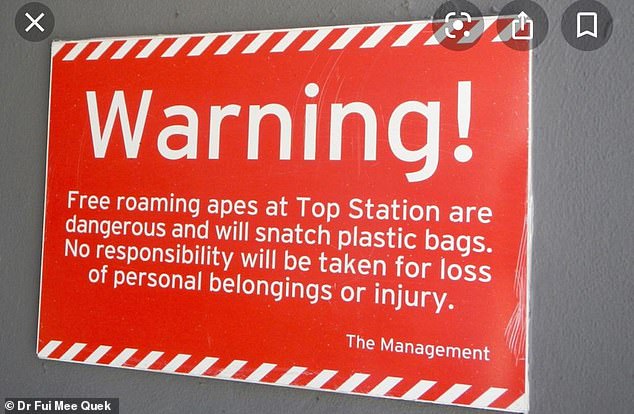 Both Gabriel and Lee Ann (pictured) are Oxford-trained doctors, and for the past few months they have been working 13-hour shifts treating Covid patients on the frontline

Dr Quek had been on her way to warn the others when Gabriel was set upon by the monkeys.

She said: 'As the rascal rifled through, the contents were systematically thrown onto the ground.

'A pack of Ricola sweets became the first tasty treat and out came a mask; a letter; a plastic sleeve which looked strangely familiar.

'Oh no... “birth certificate” I yelled. Deemed unappetising, the thief discarded it in favour of an apple and a panicked Gabriel quickly secured the package with his foot.'

Both Gabriel's birth certificate and passport were saved and he married Lee Ann only a few hours after the attack.

Both Gabriel and Lee Ann are Oxford-trained doctors, and for the past few months they have been working 13-hour shifts treating Covid patients on the frontline.

They had initially planned to marry at Magdalen College in Oxford but Covid forced them to postpone their ceremony - but their shift rotations meant that they still needed to marry before September.

Dr Quek said: 'It was quite an eventful time, so chaotic and disorganised (more another time...) that we just had to laugh about it.

In the end though all went well and we have lovely memories of this intimate and meaningful wedding. 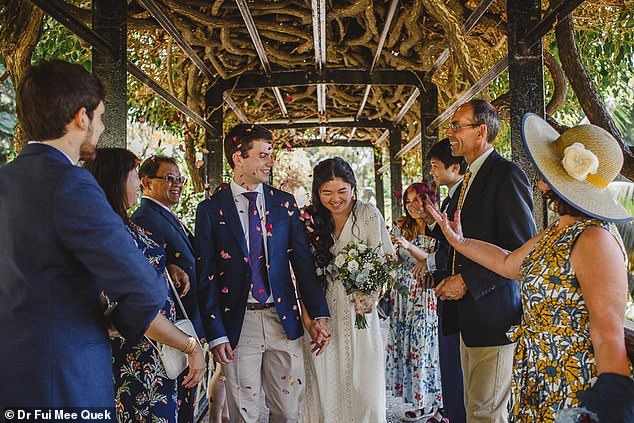 Luckily, Gabriel managed to put his foot on his important documents, meaning their wedding could go ahead as planned that day 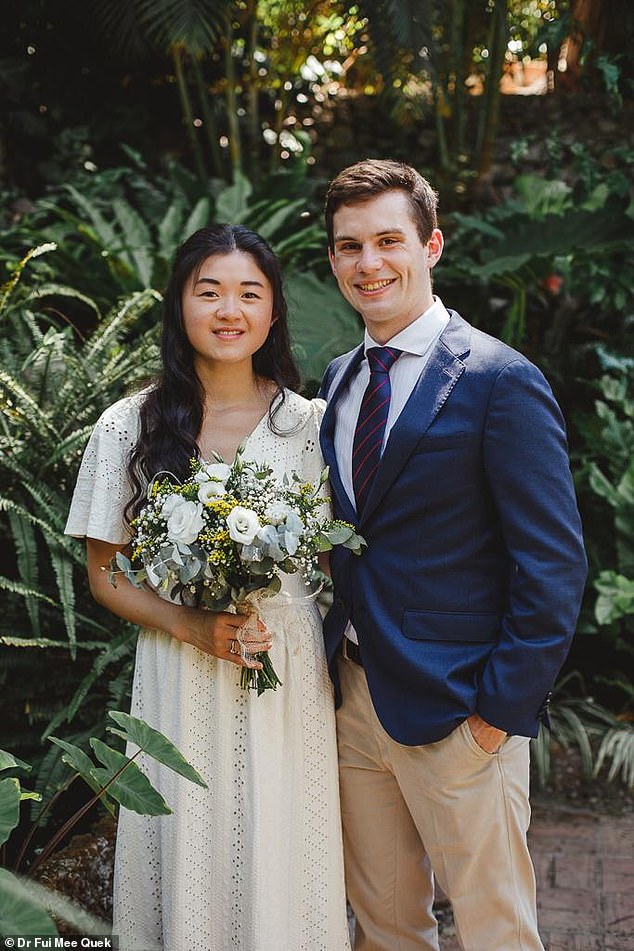 The happy couple: Lee Ann and Gabriel stand next to each other as husband and wife after their wedding ceremony in Gibraltar