We DID need a bigger boat! Fisherman believes he hooked Britain's BIGGEST shark... but '1,200lb' 11ft monster was too vast to bring ashore in 32ft vessel

A fisherman believes he hooked Britain's biggest shark - but decided against bringing the '1,200lb' monster ashore in his 32ft vessel as it was too dangerous.

Rob Rennie grappled with a mako shark off the West coast of Wales, bringing it alongside his boat with the help of five colleagues.

By estimating its length and girth, the 49-year-old has tried to make an educated guess on its weight.

He believes the it could weigh-in at between 800lbs and 1,200lbs - topping the current British record by nearly 300lbs.

But he decided against bringing the fish to shore, as that could have meant killing it. 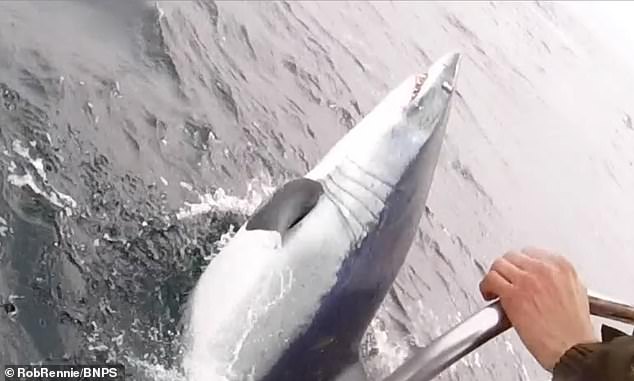 The mako shark off the West coast of Wales is thought to have weighed up to 1,200lbs, fishermen estimate 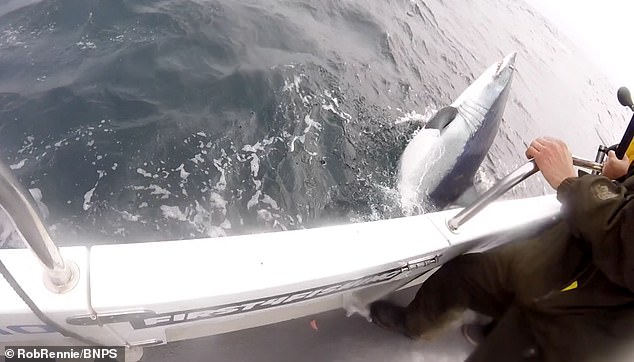 The current record for a rod-caught mako shark in UK waters stands at 500lbs and dates back to 1971.

The rules on claiming such records state the specimen must be weighed on land.

As this would have meant killing the shark Rob decided against this and released it back into the sea.

It would also not have been possible to bring it back to shore due to its sheer size and level of danger. 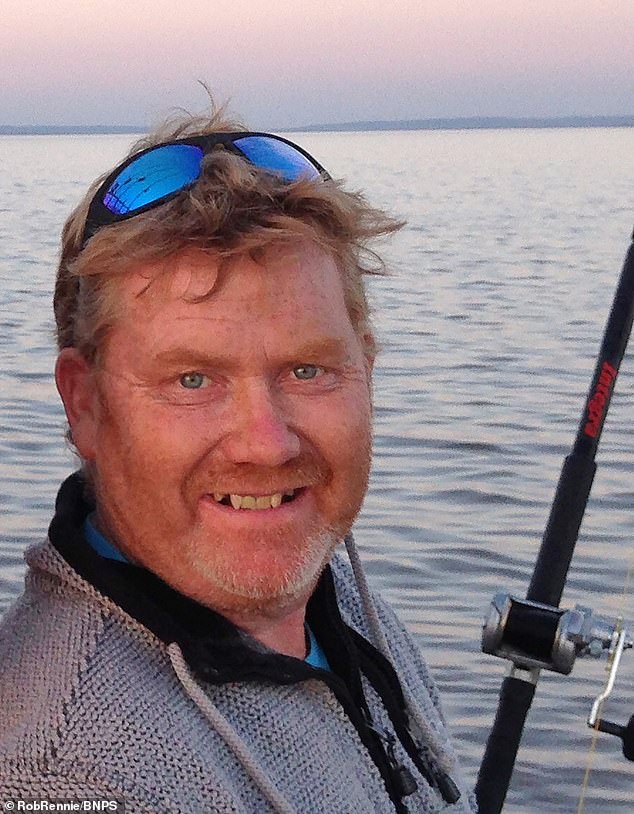 Rob Rennie, pictured, brought the shark alongside his 32ft vessel with the help of five friends 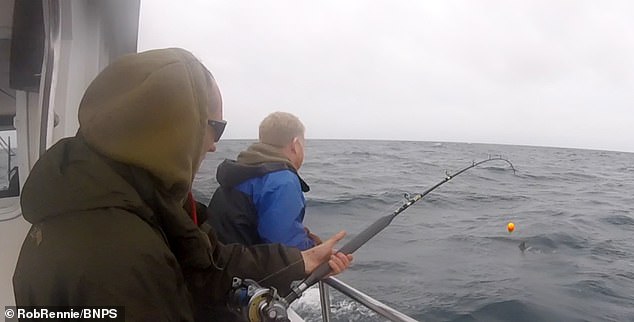 He managed to wrestle with the world's fastest shark, which he says is as dangerous as the Great White 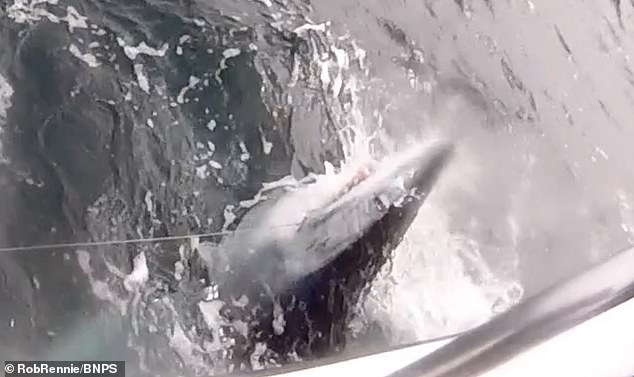 He is hoping a record can be claimed via an estimated length basis.

Makos are the fastest shark species in the world. They are also very aggressive and have been known to attack humans.

They are considered far more deadly than the three other native sharks in UK waters - the blue, porbeagle and thresher.

And in catching the mako Rob has become only the second fishermen in British maritime history to catch all four shark species.

Rob, a charter boat skipper from Hereford, said: 'Makos are dangerous - probably on par with the Great White.

'This one was huge.

'He was so big that we couldn't reel him in and had to actually drive the boat to him and pick up the slack.

'I would say it was at least 11ft and had an enormous girth. My guess would be that it weighed between 800lbs and 1,200lbs. 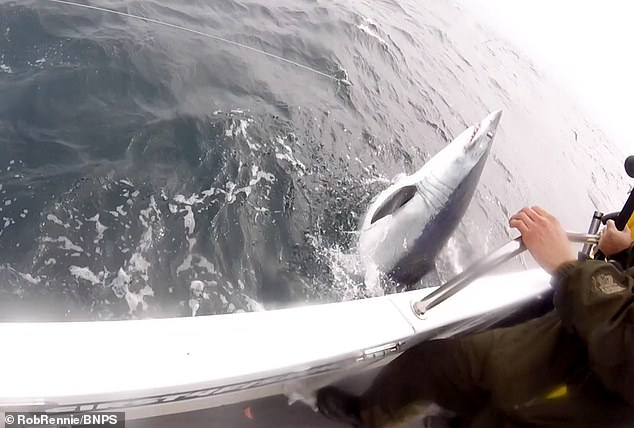 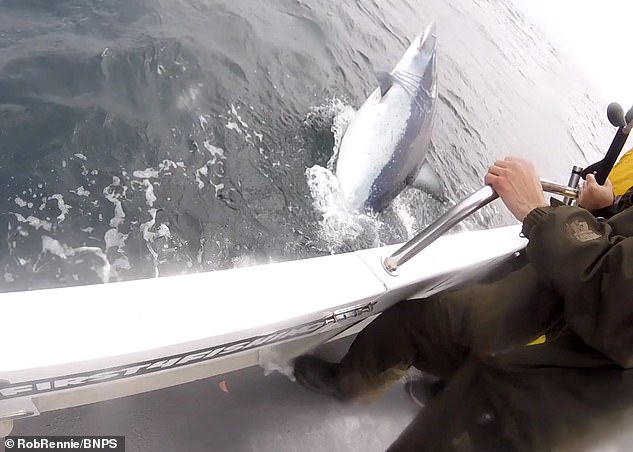 The International Shark Attack File (ISAF) has recorded 42 mako attacks on humans between 1980 and 2010, three of which were fatal 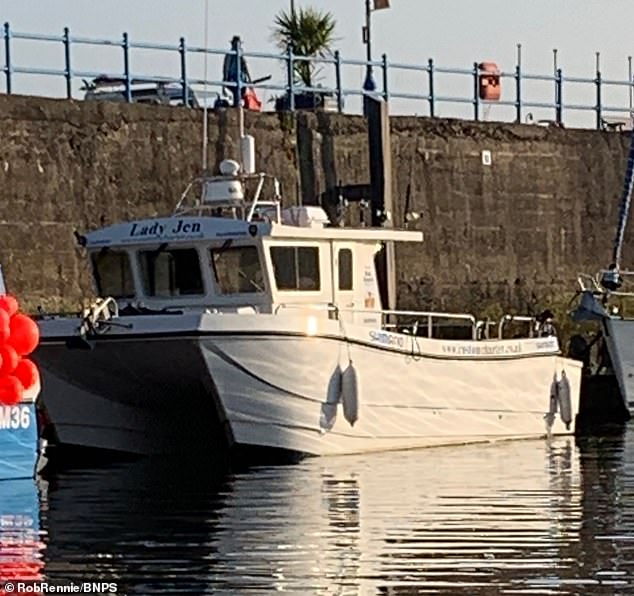 'That would make it the biggest rod caught shark ever in British waters, which would be amazing.

'In days gone by claiming a record meant killing the shark which we absolutely weren't going to do.

'I am still hoping we can claim a record using a system based more on trusting the honesty of the skipper.

'I'm really pleased with it as a catch and the reaction from the fishing world has been unbelievable.'

The International Shark Attack File (ISAF) has recorded 42 mako attacks on humans between 1980 and 2010, three of which were fatal, along with 20 boat attacks.

Makos are also classified as an endangered by the IUCN.