The UK will help build part of the world's first satellite designed exclusively to remove a piece of space junk by dragging it into Earth's atmosphere to burn up.

British company Elecnor DEIMOS will work with Clearspace to design the attitude and orbit control system that will orientate the spacecraft as it collects the debris.

The £100 million spacecraft will launch in 2025 in what has been dubbed a 'robotic suicide mission' were it will capture a single piece of space junk before destroying the debris and itself by burning up in the Earth's atmosphere 'safely away from life'.

It is being built by Swiss startup Clearspace, with support the European Space Agency (ESA) and eight nations including the UK - who contributed £12 million.

Known as 'The Claw', it will use a pincer motion to collect debris, before giving it a controlled re-entry into Earth's atmosphere in a 'robotic suicide mission'.

Dragging the debris into the atmosphere will allow it to decompose safely and away from life and keep it from potentially colliding with other orbiting objects. 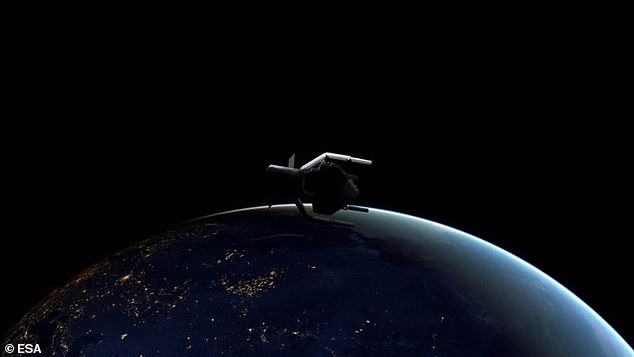 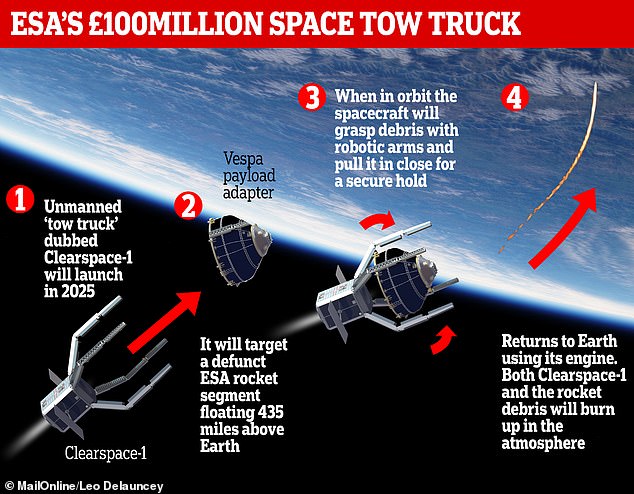 For fourteen billion years, between the big bang and the autumn of 1957, space was pristine but since that autumn humans have placed 10,000 satellites into orbit.

Most of these are either defunct or destroyed, with an estimated 160 million objects now in orbit - most of which are 'space junk' ranging from inches to feet across. 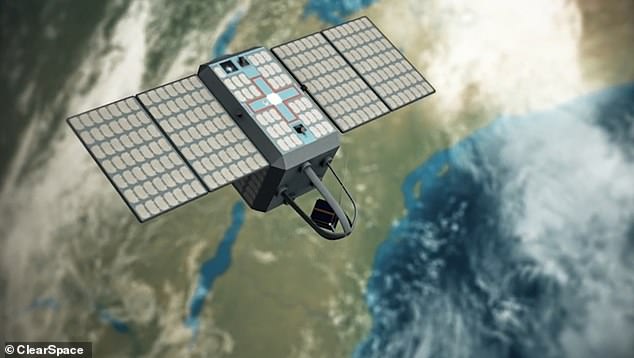 Clearspace-1 (artist's impression, pictured) is an unmanned 'tow truck' spacecraft specifically designed to target part of an ESA rocket that has been floating about 435 miles above Earth since 2013

This debris comes in all different shapes and sizes, from spent rocket bodies to a camera and a spatula dropped by an astronaut.

He said tracking was a vital part of the process and the piece of a Vega rocket they would de-orbit was a 'good target' as they already know where it is and its size.

'Future missions will involve more tracking and difficulties as we won't know exactly how big, how fast or where the debris we want to capture is,' he told MailOnline.

The UK is already a world-leader in small satellite technology, telecommunications, robotics and Earth observation, and our universities host some of the best minds in the world for space science, a UK Space Agency spokesperson said.

With the demand for services increasing, this provides an opportunity for the UK space industry to become a global leader in space sustainability.

Last year there was a close call in which an Earth-observation spacecraft operated by ESA had to light up its thrusters to dodge a Starlink satellite.

A clash between the spacecraft was far from certain, but the trajectories posed enough of a threat that ESA concluded that a manoeuvre was necessary.

Earlier this year the UK Space Agency announced a number of new investments, funded through its space surveillance and tracking (SST) programme. 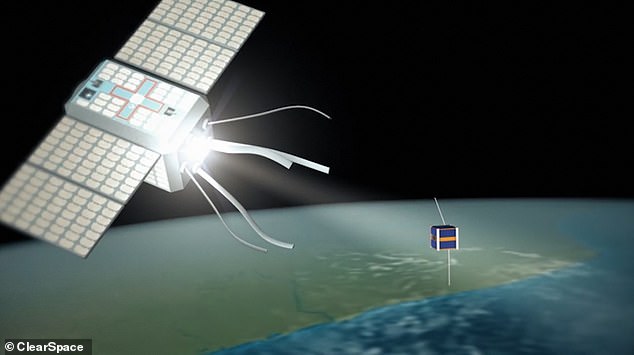 After capturing the space debris, the 'tow truck' will then fire its engine and head back towards Earth, causing both Clearspace-1 and the rocket to burn up in the atmosphere 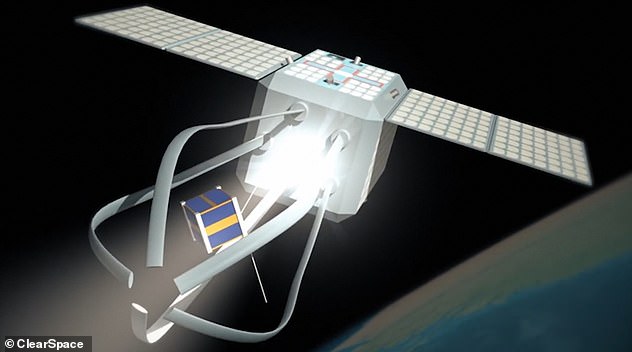 They are designed to supercharge the UK's capabilities to track this junk and monitor the risks of potentially dangerous collisions with satellites or even the crewed International Space Station.

In 2018, 186 miles above the earth, a British satellite, run by removeDEBRIS, successfully deployed a net in orbit to demonstrate how to capture space debris.

It was left in a 450 mile altitude orbit after the second flight of ESA’s Vega launcher back in 2013.

With a mass of 220lb, the Vespa is close in size to a small satellite.

The relatively simple shape and sturdy construction make it a suitable first target for the clearspace-1 mission.

Follow up missions will involve larger and more complex objects and even multiple objects.

The ClearSpace-1 ‘chaser’ will be launched into a lower 310 mile orbit.

There it will undergo critical tests before being raised to the target orbit for rendezvous and capture.

It will use a quartet of robotic arms - a pincer or 'claw' to catch Vespa.

The £100 million project will end in a glorified robotic' suicide mission'.

The demonstration, using a small object sent out by the satellite, formed part of a mission to test techniques to clear up space junk.

The mission was equipped with vision-based navigation (VBN) technology, which essentially tells a pursuing spacecraft how its target is behaving.

Other projects backed included London-based Lift Me Off which will develop and test machine learning algorithms designed to distinguish between satellites and space debris using thermal infrared and optical cameras.

Meanwhile Andor, based in Northern Ireland, will use a scientific detector camera to help the astronomy community track debris which may interrupt ground-based astronomy applications.

UK Science Minister Amanda Solloway said: 'From broadband to tracking climate change, satellites have immeasurable benefits on all of our lives.

'But as many of them break into space debris, it's vital that we take a global leadership role in preventing them from becoming space hazards.

'We plan to be at the forefront of efforts to track and remove this junk, and I am delighted that technology supporting this pioneering ambition is going to be made right here in Britain.'

The long-term solution to the space debris problem will be in stopping more debris being created, said Geer in an interview with MailOnline.

'We've got to be better as a group of nations. We need to agree new ways to work in space and stop creating debris in first place through a global space agenda, with new standards and norms,'

The UK Space Industry Act places requirements on firms looking to launch from future British space ports to set out what will happen to satellites when they are no longer required or past their operational lifespan.

Geer said it was an important mission, one that required global effort from industry and government - it is on a 'similar scale to the plastic in the ocean'. 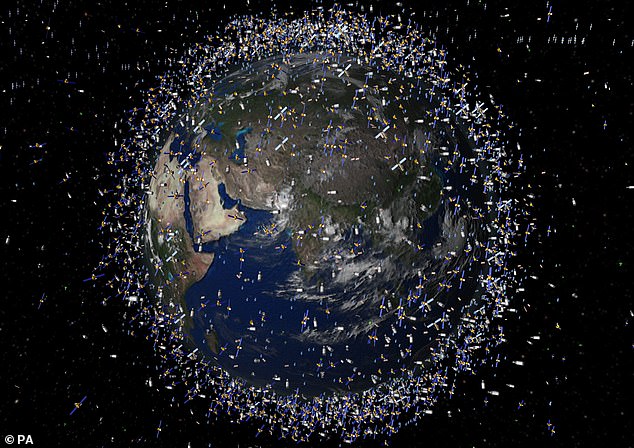 The long-term solution to the space debris problem will be in stopping more debris being created, said Geer in an interview with MailOnline.

Further down the line we could even see a new space industry - with fleets of robotic ships grabbing old bits of space junk to be recycled and reused.

'In orbit recycling is increasingly being seen as a viable solution,' Geer said.

'How we use resources on or near the Moon could help shape the longterm future of human spaceflight and industry in orbit.'