Low doses of a steroid may be linked to an increased risk of heart problems, new research has suggested.

Scientists found that for patients using less than 5mg of prednisolone per day, the absolute risk of cardiovascular disease nearly doubled, compared to patients not using glucocorticoids.

While high doses of steroids are known to increase the risk of cardiovascular disease, scientists say the impact of smaller amounts is not fully known.

A new study indicates even low doses of oral glucocorticoid may increase the risk of cardiovascular diseases.

Low doses of a steroid may be linked to an increased risk of heart problems seen with high doses, new research has suggested. Pictured: Prednisolone tablets

Glucocorticoids are steroids widely prescribed to treat a range of inflammatory diseases, allergies and certain cancers.

Data from 2011 shows around one per cent of Britons use glucocorticoids as part of their treatment.

The researchers say it was previously thought taking 5mg of glucocorticoid over the long-term was safe. 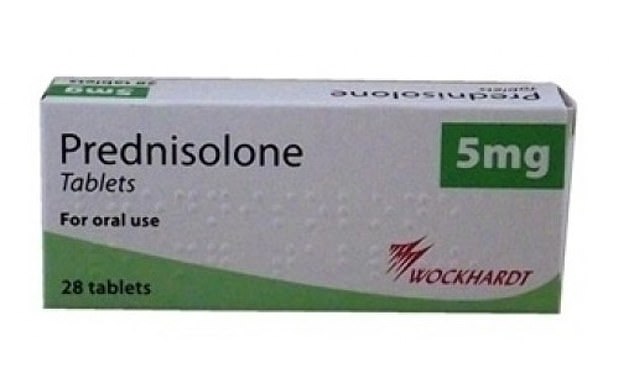 Scientists found that for patients using less than 5mg of prednisolone per day, the absolute risk of cardiovascular disease nearly doubled, compared to patients not using glucocorticoids

Their findings suggest that even patients taking low doses may have double the risk of developing cardiovascular disease (CVD).

According to the researchers, the study indicates patients needing long-term steroid treatment should be prescribed the lowest effective dose.

The study published in PLOS Medicine by Mar Pujades-Rodriguez at Leeds University and colleagues suggests patients should have a personalised cardiovascular risk prevention plan that accounts for past and current steroid use.

Although the study was limited by the lack of available hospital data on prescription drug adherence and may have reduced the size of dose-response estimates, the authors believe the large sample size contributes to greater generalisability of the results.

They write: 'These results highlight the importance of prompt and regular monitoring of cardiovascular risk and use of primary prevention treatment at all glucocorticoid doses.'

Kevin McConway, emeritus professor of applied statistics, The Open University, said: 'It's important to note that these results don't tell us anything direct about people who take this type of steroid drug for other health conditions, because such people were not included in this study.

'They also don't tell us about steroid drugs being taken by other routes (such as inhalers) rather than swallowing them.

'It's also important to note that, even of the patients with the particular inflammatory diseases that they studied, the researchers found that a great number of them were not using the drugs in question.

'Only 16% of them had been prescribed oral glucocorticoids in the year before the researchers started following them up.'

He added: 'Some of the increases in risk, even for people taking relatively small doses of these drugs compared to people taking none at all, may sound somewhat alarming, but this has to be put into the context that the risks are not huge to begin with.

'The researchers estimated that the risk of cardiovascular disease, in people with the diseases in question who did not use these drugs at all, was 1.4% in a year, which is not particularly large given their average age (they were 58, on average, when they entered the study).'