Motorists watched on in shock as three shirtless men traded blows during a dramatic highway brawl at a set of traffic lights on the Gold Coast.

Dashcam footage of the road rage brawl - which included a beer can being thrown and a running punch - was shared to Facebook on Thursday morning.

The vision shows a man driving a Ford SUV get out of his car at a red light and head towards a silver Ford sedan on the intersection of the Gold Coast Highway and Broad Street in Labrador on Sunday afternoon.

A carload of passengers from the sedan then get out of the car onto the road in front of a truck where a scuffle breaks out. 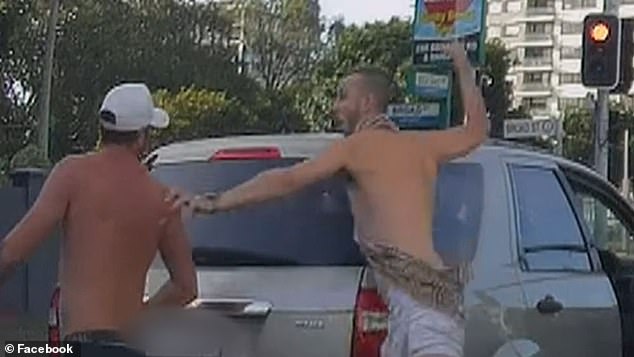 A man wearing white shorts and a woman in a white jumper shove the SUV driver back across the road to the footpath while another passenger with a drink follows them over.

The SUV driver is berated by the woman as he gets back into his car before the man in white shorts throws a drink at his windscreen.

'I can't believe this is happening.'

The woman then argues with a passenger at the door of the SUV before the drinking man separates her.

The SUV driver then gets out of the car again and heads towards the passenger side of his car as the man in white shorts retaliates with a wild running punch. 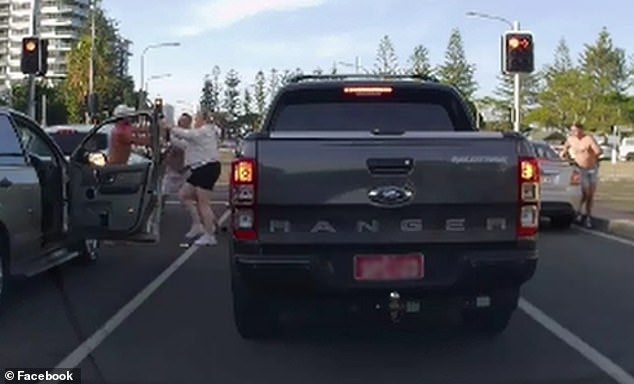 The pair taunt each other on the road before making their way back to their respective cars and driving away.

It is understood both groups were known to each other, but it is unknown what sparked the fight.

Queensland Police said no complaint was made about the incident.