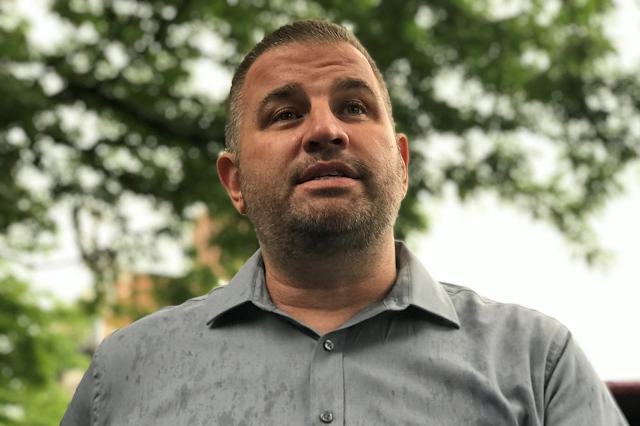 \
The people who stormed the U.S. Capitol on Wednesday are getting support from the president of Chicago’s Fraternal Order of Police lodge.

John Catanzara, elected last May to represent the city’s 12,000 rank-and-file police officers, said he understands the frustration behind the riot, which led to four deaths, injuries to several police officers and damage to the iconic building.

“There was no arson, there was no burning of anything, there was no looting, there was very little destruction of property,” Catanzara told WBEZ in a Wednesday evening phone interview. “It was a bunch of pissed-off people that feel an election was stolen, somehow, some way.”

Catanzara echoed President Donald Trump’s oft-repeated false claims that Joe Biden stole the election. But the FOP leader admitted there is no proof.

“I don’t have any doubt that something shady happened in this election,” Catanzara said. “You’re not going to convince me that that many people voted for Joe Biden. Never for the rest of my life will you ever convince me of that. But, again, it still comes down to proof.”

Stay informed on Chicago and beyond with our daily newsletter.

You can always sign up for The Rundown at a later point. WBEZ is supported by members like you.

Soon you will receive the top local, national and news stories from around the world each weekday afternoon.

There was an error!

“Evidence matters,” Catanzara said. “Until that appears, shame on them for what they did, but it was out of frustration. There’s no fights. There’s no, obviously, violence in this crowd. They pushed past security and made their way to the Senate chamber. Did they destroy anything when they were there? No.”

Video and photographs of the incident show that the rioters smashed windows of the Capitol and ransacked offices inside.

An armed stand-off took place at the door of the House chamber as the rioters derailed the election’s certification in an attempt to keep Trump in power. Police near the building confiscated guns, pipe bombs and Molotov cocktails, NPR reported.

Catanzara said Wednesday’s mayhem was “very different than what happened all across this country all summer long in Democratic-ran cities and nobody had a problem with that.”

The focus last summer, he said, was “blaming the police and the police’s response to the violence, looting and criminal behavior.”

“If the worst crime here is trespassing, so be it. But to call these people treasonous is beyond ridiculous and ignorant.”

Catanzara said he himself “wouldn’t have partaken in” the Capitol assault but he kept defending those who did.

“They’re individuals,” he said. “They get to do what they want. Again, they were voicing frustration. They’re entitled to voice their frustration. They clearly have been ignored and they’re still being ignored as if they’re lunatics and treasonous now, which is beyond stupid.

“It’s a whole side of the argument and, primarily, your profession is at the root of it,” Catanzara said, referring to news media, “basically championing Joe Biden the whole time.”

Catanzara was disciplined by the Chicago Police Department for posing in uniform in 2017 with a sign saying he supports his president. The union’s national level endorsed Trump’s election bids in both 2016 and 2020.

Catanzara has publicly feuded with Chicago Mayor Lori Lightfoot over a host of issues. This morning Lightfoot tweeted a response to his comments.

“This wasn’t ‘frustration.’ It was a violent insurrection. The comments by John Catanzara, Chicago FOP President, either demonstrate clear delusion or reckless disrespect for the rule of law—or both,” she wrote.

Catanzara also criticized the outgoing president for Wednesday’s mayhem: “I’ll be the first to say Trump deserves some responsibility for this. He could have handled this whole situation quite differently, but that’s for him to answer, not me.”

“Obviously it has to fall on his doorstep for what kinda happened … no doubt about it,” he said.

But Catanzara said the riot was getting blown out of proportion.

“It’s an inconvenience at this point, is all it is,” he said. “This is not some mass insurrection, coup attempt. They’re not destroying or burning down the fricking Capitol building. This hyperbole and this emotion that the media is spewing now, like this is some kind of end-of-times scenario, is ridiculous.”

Chip Mitchell reports out of WBEZ’s West Side studio about policing. Follow him at @ChipMitchell1. Contact him at cmitchell@wbez.org.