Aye-dorable! Rare aye-aye pup is spotted for the first time, two months after being born at Bristol Zoo Gardens – raising hopes for conservation of the endangered species

A baby aye-aye — an endangered lemur species native to Madagascar — has been born at Bristol Zoo.

The unnamed infant arrived two months ago but its doting mother, five-year-old Tahiry, kept it away from view inside an elaborately constructed nest.

Keepers do not currently know the sex of the baby but have today released the first images and footage of the unusual creatureAye-ayes are nocturnal and are famed for having an extended middle finger which they use to find food inside logs and trees.

There are only 50 aye-ayes in captivity in the world, and they are in decline in Madagascar, the only place in the world where they live in the wild.

Zookeepers say every birth of this species is 'really important' for its future. . 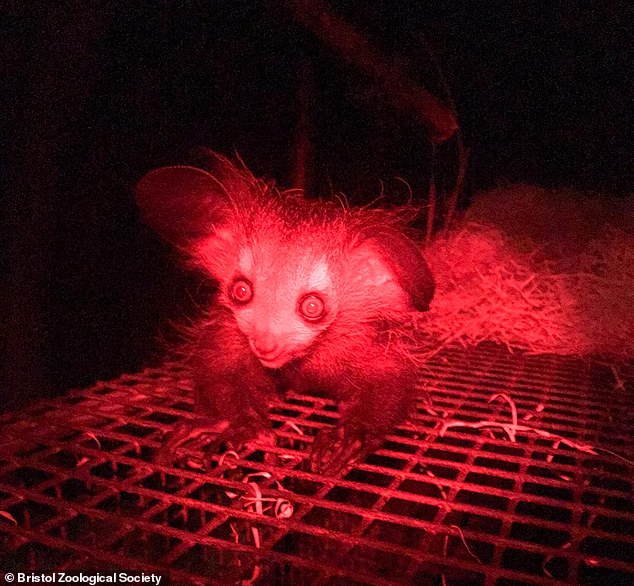 The unnamed infant arrived two months ago but its doting mother, five-year-old Tahiry, kept it away from view inside an elaborately constructed nest

Considered one of the world's oddest animals, the aye-aye has just gotten even weirder after scientists discovered a sixth finger hiding in plain sight.

The six-fingered Madagascan lemur has become the first primate to be found with an extra digit.

New research has found that the aye-ayes have tiny sixth fingers called 'pseudothumbs' - complete with their own fingerprints - that may help them grip objects and branches as they move through trees.

The extremely rare lemurs have constantly growing teeth, large ears, and strange hands with a slender, long middle fingers that they use for tapping on trees to find grubs before digging in with their teeth and spearing their prey.

Senior mammal keeper Paige Bwye, who took the remarkable pictures, said: 'I went to check on the aye-ayes and I saw these two bright, dark eyes peering at me and I knew immediately it was the new infant.

'Our eyes locked on each other. It was a very special moment for me because I had also been the first to see its mother, Tahiry, who was born at the zoo five years ago.

'I kept thinking "Please don't move before I can get a picture", and I was able to get close enough to capture these.

'Tahiry came out to see what was happening but we have such a good relationship with her that she was quite happy with me being there.'

Tahiry gave birth to the infant in Twilight World where she lives with her mate, Peanut, who is four and came from London Zoo in 2019.

Keepers at the zoo had heard the little aye-aye making squawking sounds for weeks but were unable to sneak a peek of the newborn.

Miss Bwye said: 'She built a narrow corridor around the inside edge of the nest box from wood-wool and bamboo.

'It wound its way into the centre where she made an elaborate nest with a roof. None of the keepers could see inside.'

She said keepers do not yet know the sex of the little aye-aye, but they estimate it is about 12 inches (30cm) long and probably weighs about 14 ounces (400g).

The birth of the infant is important because aye-ayes are classified as endangered in their native Madagascar – the only place where lemurs are found in the wild. 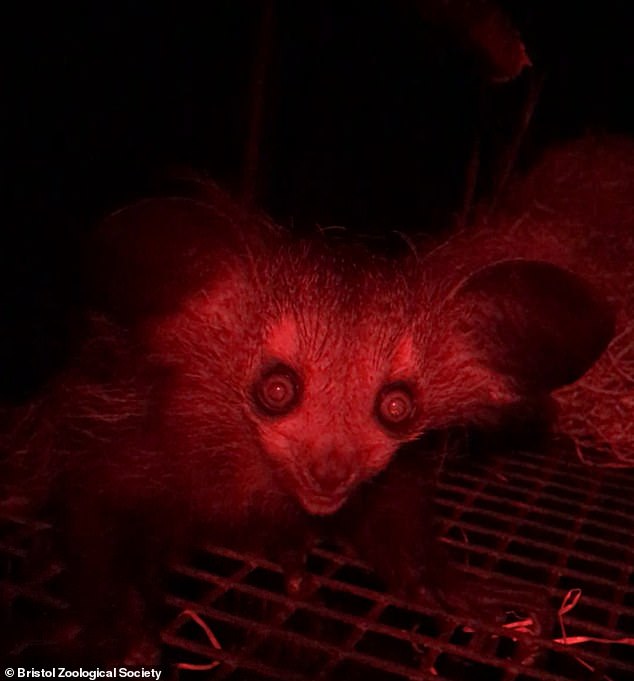 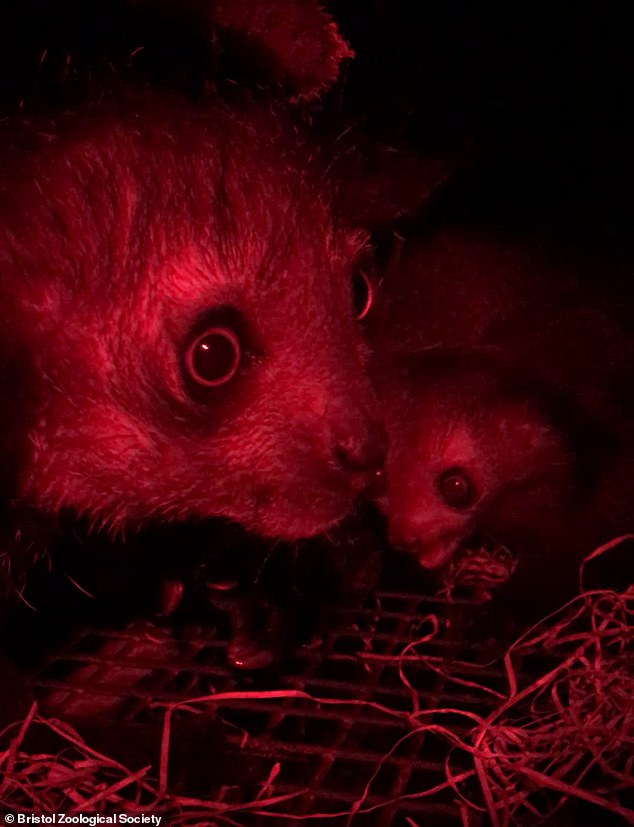 Their forest homes are being destroyed by people for agriculture and timber. In some areas they are also killed on the belief that they are a symbol of bad luck.

Bristol Zoological Society has been working in northern Madagascar since 2006 and is involved in building a new research centre in the country, allowing conservationists to study lemurs in their natural habitat, and to ultimately help save them from extinction.

The Society has recently been awarded funding to continue its work protecting lemur species which live in trees planted to provide shade for cacao plantations.In addition, the Bristol Zoological Society team is continuing to evaluate reforestation efforts inside Sahamalaza-Iles Radama National Park, its long-term field site.

This year they hope to create a permanent tree nursery to grow saplings and help establish natural corridors for lemur species such as the blue-eyed black lemur and Sahamalaza sportive lemur.

Aye-ayes have evolved to feed rather like woodpeckers. At night they clamber around dead trees and tap the bark with their skeletal middle finger listening for the sound of grubs moving.

Then they use their sharp teeth to tear at the wood and fish out the grubs with their extended finger.