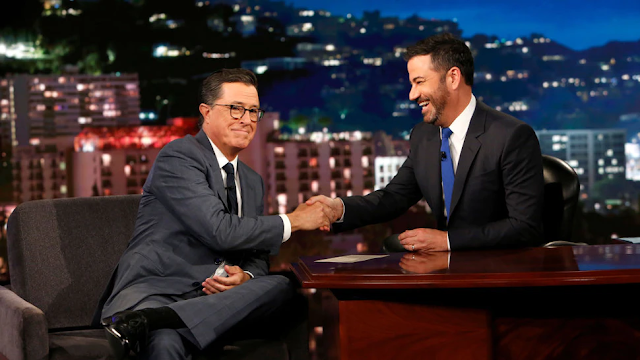 Writing in National Review, Kyle Mann, the editor-in-chief of the Babylon Bee, the conservative Christian satirical site, slammed late-night television talk-show hosts, asserting, “The Left is increasingly the party of self-righteous zealots, disciples of a leftist religion that they cannot laugh about.”

Mann began his essay by stating:They think the point of comedy is to make “really targeted jokes,” to “undermine” things, or to “target” things they — and presumably their audience — disagree with. Over the last decade, late-night hosts across the board began to lay aside their relatable, everyman’s brand of comedy and pivot toward lecturing the crowd on their moral values. They went from chasing laughter — no matter who the butt of the joke may have been — to chasing applause. The result has been anything but funny.

“If you find yourself unable to laugh at something, unable to find anything worthy of satire — especially in a politician like Joe Biden — you may be blinded by your own worldview,” Mann pointed out. “A president who has been in politics for five decades promising hope and change. A politician who campaigned against the abuses of the Trump administration and then, once elected, did the very things his party once decried. A president heralded as a return to normalcy who is now proposing ideas that threaten our norms and institutions at a far more fundamental level than Trump ever did.”

Mann wasn’t shy about criticizing his own side of the political aisle: “Let’s admit something here: Conservatives can be pretty bad at comedy. … I’ve gotta admit, I’ve written some stinkers in my day too. But we’ve got to be honest with ourselves. Conservatives have tried and failed to put out good comedy shows and films to rival the late-night propaganda emanating from the left every weeknight. The problem with many of these attempts is that they were trying to make a point first and be funny second.”Then he turned to the talk-show hosts, who from Jimmy Kimmel to Stephen Colbert to Seth Meyers to Jimmy Fallon all hail from the political Left, as well as other “comedians”: “[T]he Left is increasingly the party of self-righteous zealots, disciples of a leftist religion that they cannot laugh about. The great pronoun debate is a goldmine of contradictions and absurdities, but they will not touch it.”

Ultimately, it’s up to us, the audience. We have a choice when we hear jokes that criticize what we believe. We can chuckle and think, “I never thought about it that way,” and maybe change for the better, or at least have a healthy and humble sense of humor about who we are. Or, we can choose to be offended, to cancel the comedians that would dare criticize our dogma and demand they be replaced with self-righteous moral lecturers who are preaching to the choir.

Unlike the the one-sidedness of the talk show hosts Mann describes, The Babylon Bee, despite its conservative perspective, has also targeted figures on the political Right. It kidded President Trump after he had been acquitted in his second Senate impeachment trial, saying he stated, “I am now the most acquitted president ever — even more than Clinton.” The Bee also targeted televangelist Joel Osteen in 2017, writing, “Joel Osteen Sails Luxury Yacht Through Flooded Houston To Pass Out Copies Of ‘Your Best Life Now.”