Could YOUR lockdown garden buys be putting your home at risk? Trendy pizza ovens, fire pits and 'shed offices' led to a spike in house fires, insurance data reveals

Trendy homeowners who have invested in fire pits and pizza ovens during lockdown, or worked from home in a shoffice have increased the chances of a pricey blaze, research has revealed.

Insurer Zurich has warned that outbuilding fires - in sheds, garages and conservatories - increased by 16% last year, compared with 2019.

It argued that the trend appears to be driven by people across the country converting sheds and garages into offices, home gyms and garden bars.

The new figures revealed that 33 of the 45 UK regions asked revealed a jump in shed and garage blazes over the year, with an average increase of 25%. 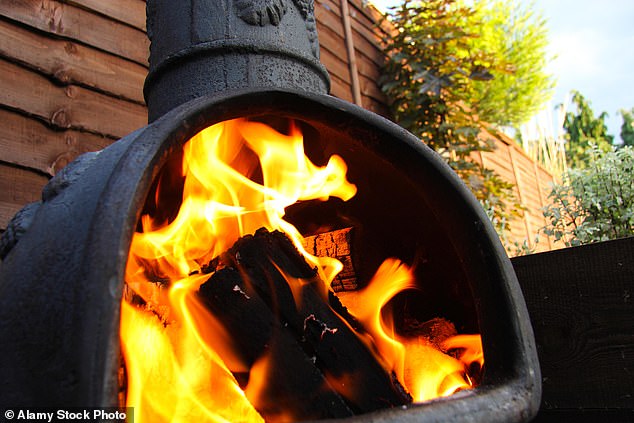 The huge increase in people buying pizza ovens and fire pits, which carry a fire risk if not extinguished correctly, could also account for the jump in outbuildings going up in smoke,' an expert has warned

The data went on to show how there was a particular rise in Lancashire, which saw a 58% increase, and Lincolnshire, where outbuilding fires rose by 50%.

The areas of West Sussex and North Yorkshire were also affected, with a surge in outbuilding fires increasing by 47% and 46% respectively. It comes after planning applications for garage conversions alone soared by 25% last year.

Meanwhile, there was a 7.5% rise in people seeking permission for garden buildings and works.

Phil Ost, Head of Personal Lines at Zurich, commented: 'With many of us stuck at home, we are spending more time in our gardens than ever before.

Aside from storing gardening tools, our sheds and garages have become a haven to escape the stresses of family life and for others a place to work.

Homeowners up and down the country have converted outbuildings into everything from bars and yoga studios, to gyms and offices.

But as Brits take refuge in their garden sheds and garages, it appears to have sparked a rise in accidental blazes.'

Elsewhere, outdoor pizza ovens also became a popular summer trend, with retailers reporting that sales of high-tech models have soared by 300 per cent.

Cooking artisan-style pizza at temperatures of up to 500 degrees, the new generation of portable, gas and wood-fuelled pizza ovens promise crisp crusts and gooey toppings in minutes.

However, according to Phil Ost, it comes with a risk.

'The huge increase in people buying pizza ovens and fire pits, which carry a fire risk if not extinguished correctly, could also account for the jump in outbuildings going up in smoke,' he  continued.

'Sheds are a perfect environment for fires to take hold – often made of wood, sited outside and often home to flammable liquids like petrol for a lawnmower or oils and paint thinners.

We are urging homeowners to be mindful of potential fire hazards and take precautions to minimise the risks.'

How to reduce the chance of outbuildings going up in smoke:

1. If your shed or garage has power and you are running electrical appliances, make sure you do as you would in your home. Turn them off if you are out or have gone to bed and do not leave appliances running over night. Also regularly monitor for damage to cables and faulty appliances.

2. It is vital not to store your used BBQ or fire pit in the shed until it has cooled completely.

3. Flammable or combustible liquids such as oils and paint thinners should always be store safely and in approved containers when not in use.

4. When in use, BBQs, fire pits and pizza ovens should be placed as far away from your shed or outbuilding as possible.

Shut the shed doors and windows before lighting.

5. Ensure your shed is positioned a suitable distance from other buildings and your home.

If it should catch fire, this will reduce the chances of it spreading to yours, or a neighbour's property.