Massive 8,998sq-ft mosaic floor with stunning images of a lion attacking a deer and two gazelles that symbolize peace is unveiled at Hisham Palace in Jericho

After years of $12 million restoration project, the Palestinian Tourism and Antiquities Ministry unveiled one of the largest floor mosaics in the world, in the West Bank city of Jericho.

Resembling a fine carpet, the vast mosaic covers 8,998 square feet of Hisham's Palace, an Ummayad desert castle dating from to the eighth century.

One tableau includes a scene of a lion attacking a deer, symbolizing war, and two gazelles eating, symbolizing peace. Both sets of animals are under what Jericho Governor Majed Al-Fityani called ‘the tree of life.’

In all there are 38 different panels made from more than five million pieces of stone, Haaretz reported, including delicate floral and geometric designs composed of 21 colors, including red, blue and ochre stones. 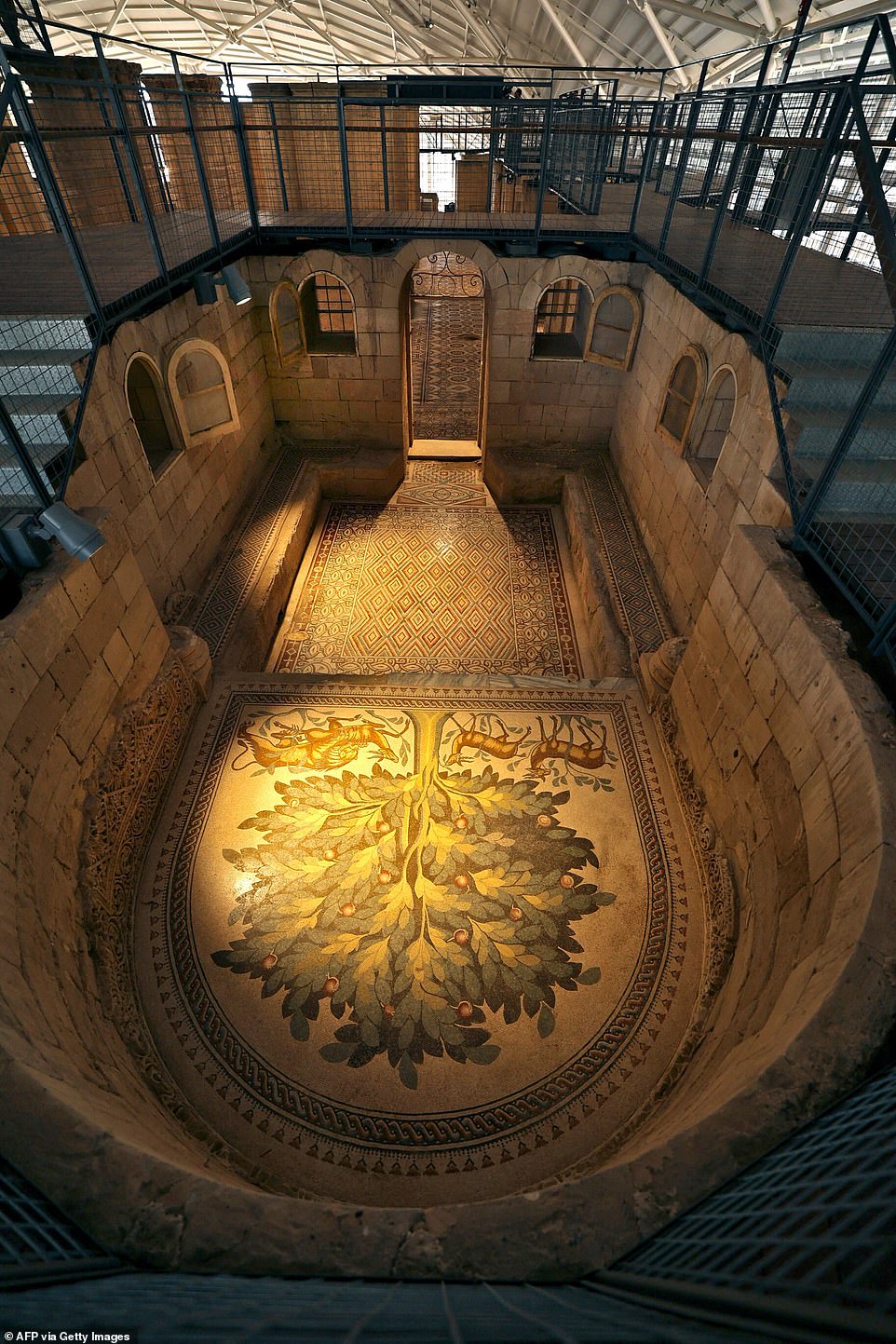 Restoration work on a massive carpet-like mosaic in the West Bank city of Jericho has been completed, revealing 38 intricate panels depicting floral and geometric designs and a 'tree of life' (above)

Hisham's Palace had remained forgotten for centuries until it was rediscovered in the 19th century.

British archaeologist Robert Hamilton explored it more extensively in the 1930s, when the mosaic was first discovered in the palace’s main bathhouse.The beautiful tiles were buried under rubble caused by an earthquake that hit Jericho in 947 AD.

Since its rediscovery, the two-story palace has become one of the most important Islamic monuments in Palestine, and a major tourist attraction for both natives and foreigners. 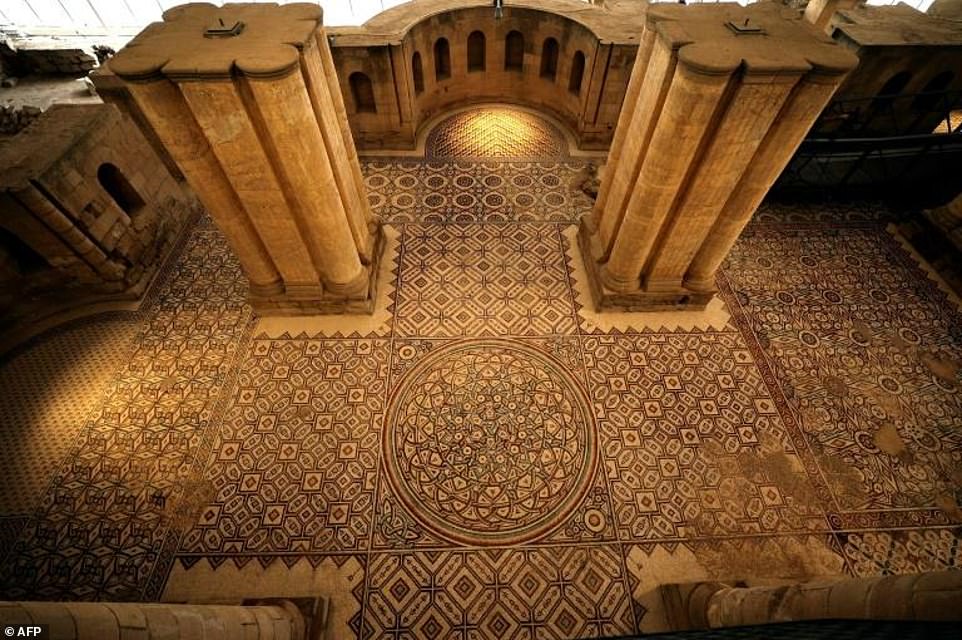 The mosaic is located inside the baths of Hisham's Palace, an eighth-century desert castle constructed during the Ummayad Dynasty by Caliph Hisham ibn Abd al-Malik 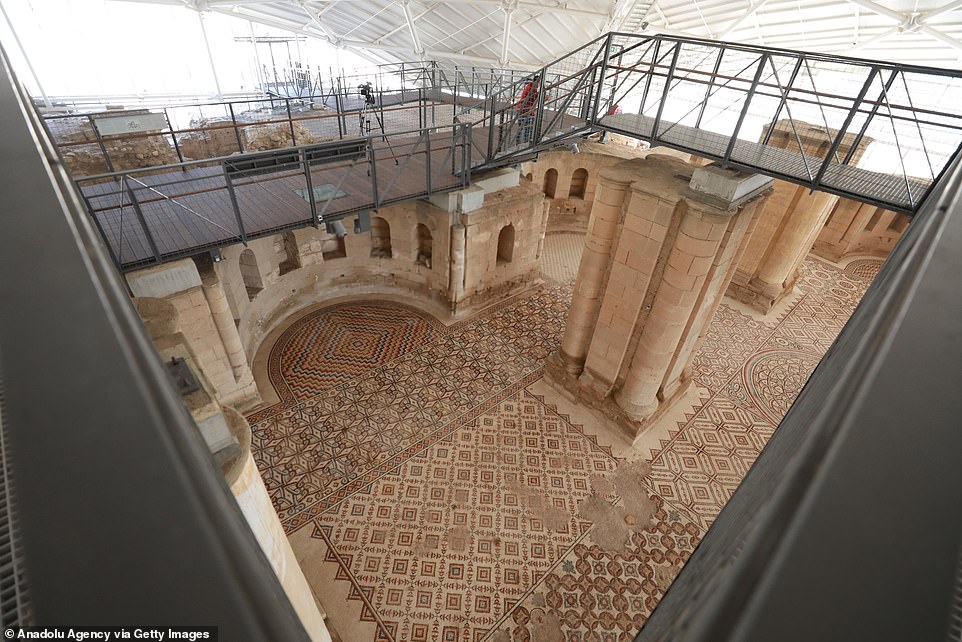 Hisham's Palace has become one of the most important Islamic monuments in Palestine, and a tourist attraction for both natives and foreigners. The mosaic remained largely neglected, though, until restoration work began five years ago 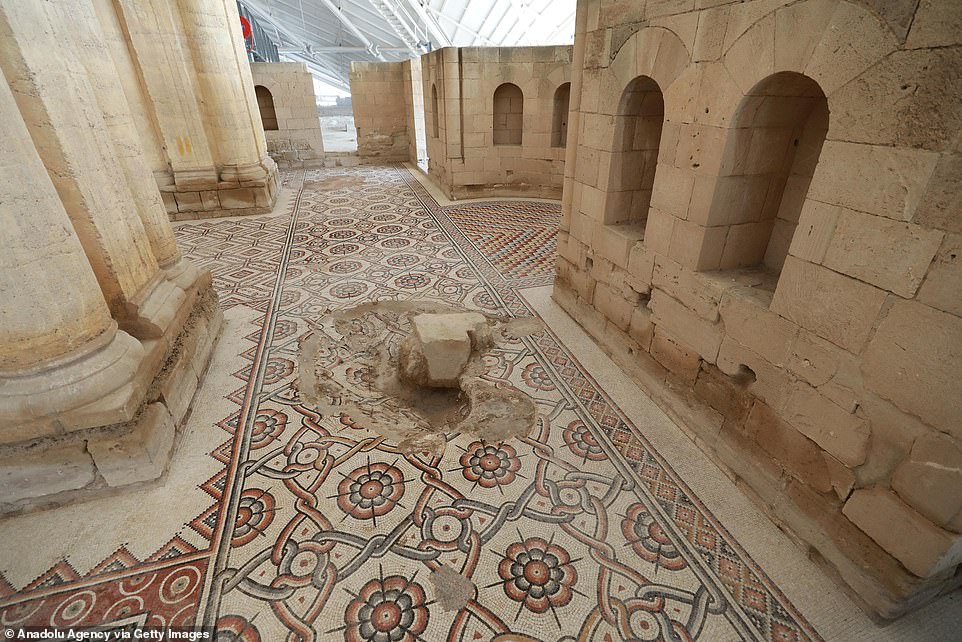 According to the Ministry of Tourism and Antiquities, the site receives more than 40,000 visitors a year, including many schoolchildren.

But the mosaic itself remained largely neglected, only placed under canvas and soil to protect it against sun and rain.

Five years ago, the site was closed to visitors and underwent a $12 million restoration funded by the Japanese government that worked to restore the work to its original beauty. 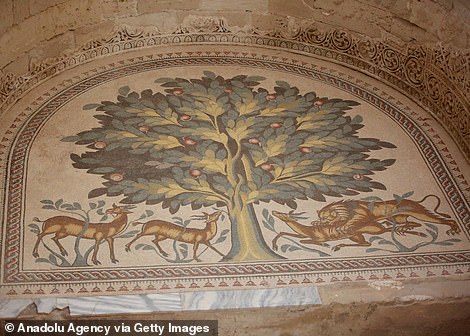 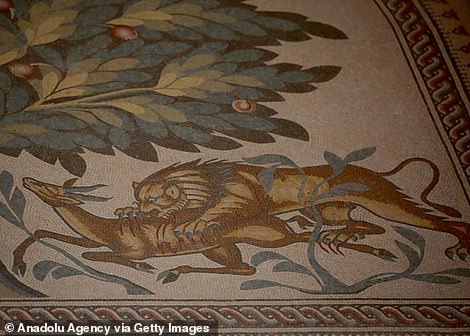 Under the mosaic's tree of life are two gazelles, representing peace, and a lion devouring a deer, symbolizing war

Palestinian Tourism Minister Rula Maa’yah said the mosaic is an international treasure both because of its immense size and because it is preserved in its original location.

Archaeologists briefly removed a protective covering from the mosaic so the public and press could view it, but it was soon re-covered to protect it until a roof is completed next year, when it will be opened to the public. 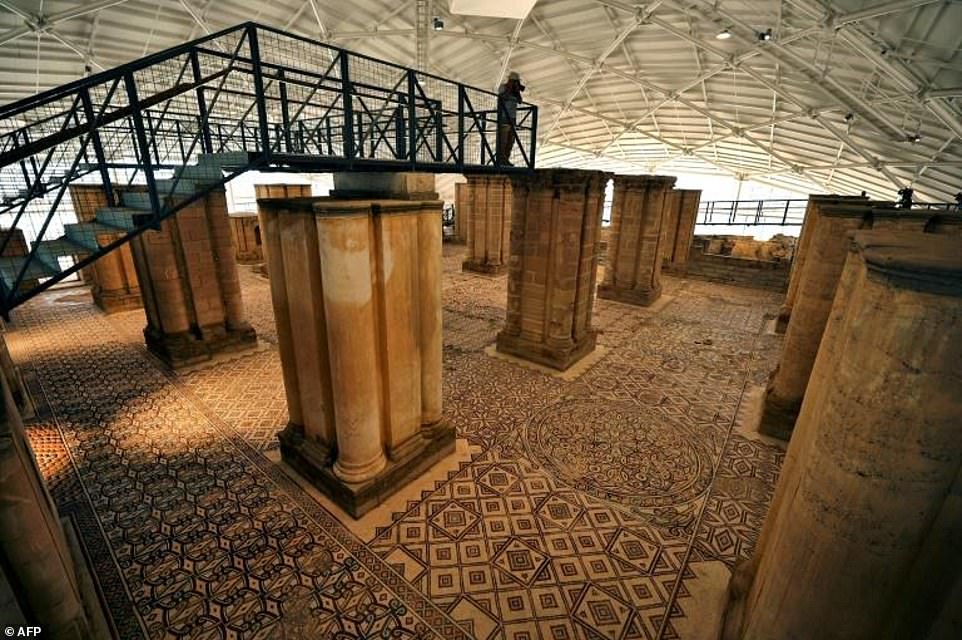 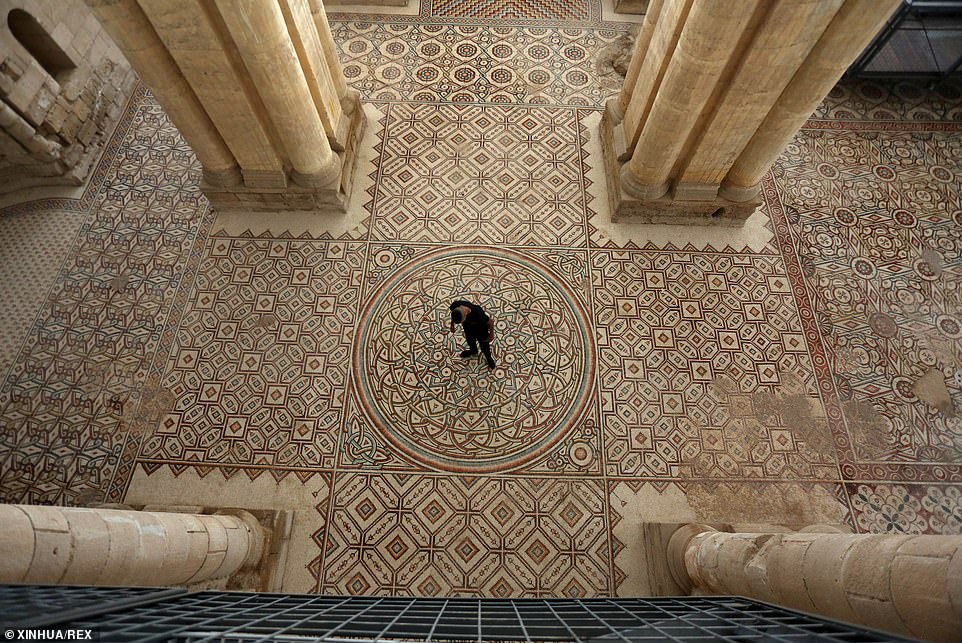 A worker stands on mosaic panels at Hisham's Palace in the West Bank city of Jericho, unveiled Thursday after a multi-year restoration project funded by the Japanese government

Saleh Tawafsha, the under-secretary at the Palestinian tourism and antiquities ministry, told AFP he hoped that the restoration will draw tourists to Jericho, which lies in the Israeli-occupied West Bank.

Not much is known about the Ummayad Dynasty, which lasted from 660 to 750 AD, and was the first Islamic empire established following the death of Mohammed.

Spread across 150 acres, the estate is located in Khirbat al-Mafjar, about three miles outside Jericho and 20 miles from the Dead Sea,

It is believed to have been started by Caliph Hisham bin Abd al-Malik or his nephew and successor al-Walid II between 724 and 743 AD as a winter retreat. 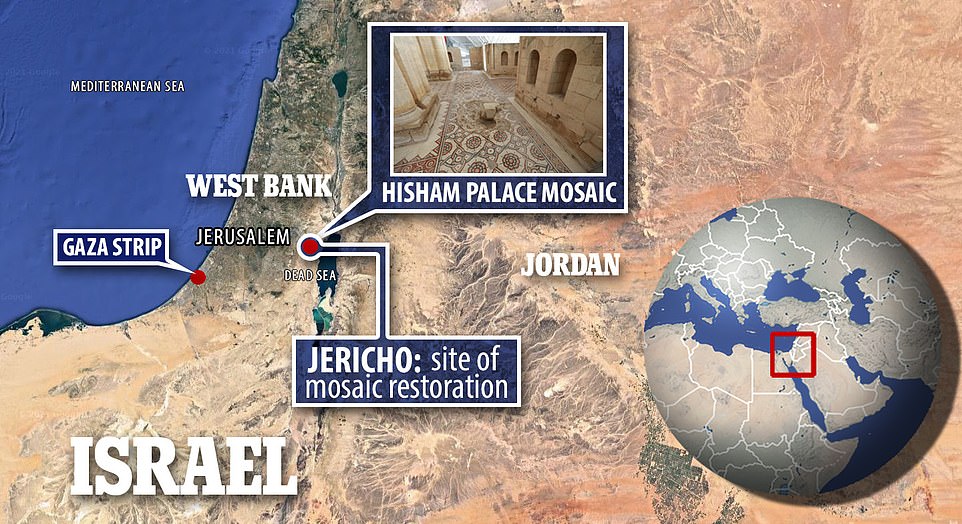 Located in the Israel-occupied West Bank, the palace is about three miles from Jericho and 20 miles from the Dead Sea 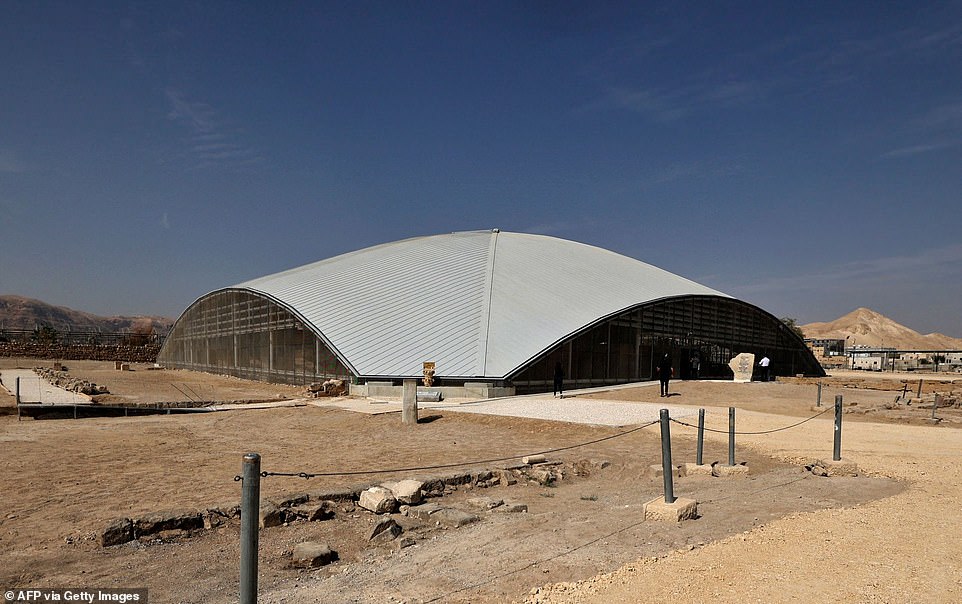 Al-Walid II lived in the palace as a winter resort but it was uncompleted when an earthquake destroyed much of the structure in 749.

Later additions added during the Abbasid Caliphate, which lasted from 750–950 AD, include an elite residence, a mosque, an audience hall, a monumental fountain and various stucco sculptures, including those of partially nude women. 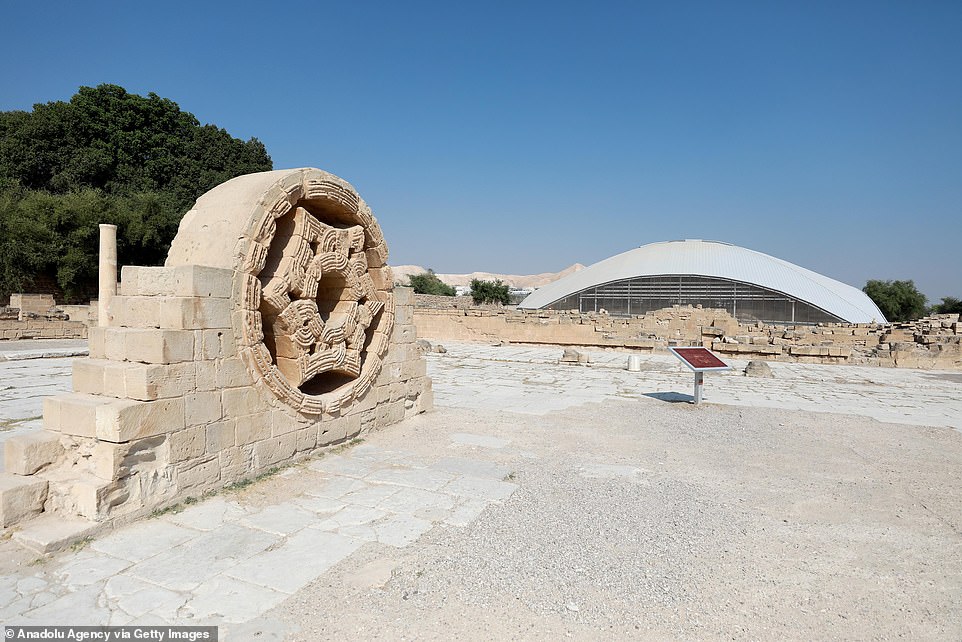 Opposite the entrance to the palace is a star window that has become a famous symbol of the ancient city of Jericho, according to the Metropolitan Museum of Art.

But agricultural and urban development in the region is limiting further archaeological exploration and, in 2010, the Global Heritage Fund listed the palace as one of a dozen sites under threat of ‘irreparable loss and destruction.’