Endangered California condors can have 'virgin births', according to a new study released Thursday that confirmed two male chicks hatched in 2001 and 2009 from unfertilized eggs.

The chicks, dubbed SB260 and SB517, had DNA that was 100 percent of their mothers, which means the two adult condors fertilized the eggs themselves.

The phenomenon is known as parthenogenesis, but researchers were unaware that the chicks were born through asexual reproduction until they died due to health complications - one passed away in 2003 at age two and the other in 2017 at eight.

However, 'the team plans on continuing future genotyping efforts in the hopes of identifying other parthenogenetic cases,' the San Diego Zoo shared in a press release.

Scroll down for videos 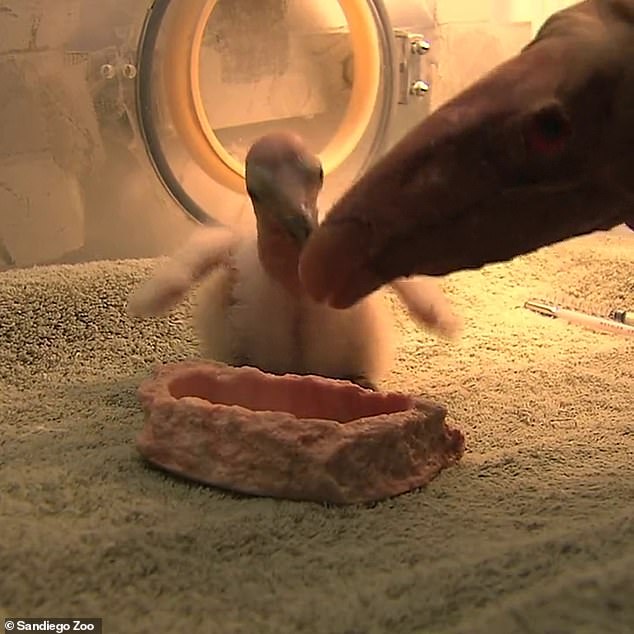 Endangered California condors can have 'virgin births', according to a new study that confirmed two male chicks hatched in 2001 and 2009 from unfertilized eggs

Oliver Ryder, the study's co-author and director of conservation genetics for the San Diego Zoo Wildlife Alliance, said in a statement: 'These findings now raise questions about whether this might occur undetected in other species.'

California condors are the largest land animal in North America, with a 9.5-foot wingspan and weighing up to 31 pounds.The bird once flourished across the US from California to Florida and even in Western Canada and Northern Mexico.

However, these massive creatures have been on the decline from when European settlers first spread across North America, National Geographic reports. 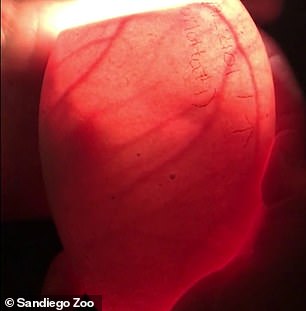 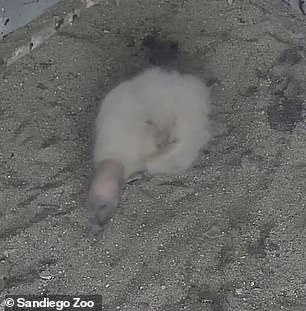 The chicks, dubbed SB260 and SB517, had DNA that was 100 percent of their mothers, which means the two adult condors fertilized the eggs themselves. Pictured is inside one of the eggs

Parthenogenesis is a natural form of asexual reproduction in which growth and development of embryos occur without fertilization by sperm.

In animals, parthenogenesis means development of an embryo from an unfertilized egg cell.

The process has been observed in honey bees, ants and birds.

In plants parthenogenesis is a component process of apomixis.

And they have been on the US endangered species list since 1967 and were on the brink of extinction shortly after.

Breeding programs, like the one at the San Diego Zoo, have since been working to revive the population.

The team at the California zoo welcome the chicks with open arms, but did not realize the pair were produced through a virgin birth because the others had produced multiple offspring with mates one had 11 chicks, while the other was paired with a male for over 20 years and had 23 chicks.

This is truly an amazing discovery,' said Ryder.

'We were not exactly looking for evidence of parthenogenesis, it just hit us in the face.

'We only confirmed it because of the normal genetic studies we do to prove parentage.

'Our results showed that both eggs possessed the expected male ZZ sex chromosomes, but all markers were only inherited from their dams, verifying our findings.'

Both chicks experienced health issues that led to their deaths.

SB260, born 2001, died two years later after being released into the wild. 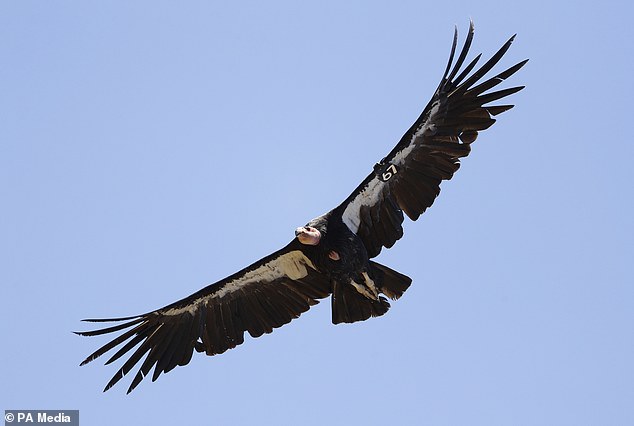 California condors are the largest land animal in North America, with a 9.5-foot wingspan and weighing up to 31 pounds A California condor takes flight in the Ventana Wilderness east of Big Sur

Researches note the chick was smaller than the average and had difficulty mixing in with the wild condors.

The researchers cannot say if the health issues are due to how the chicks were born, but such issues have been found among other animals that have virgin births.